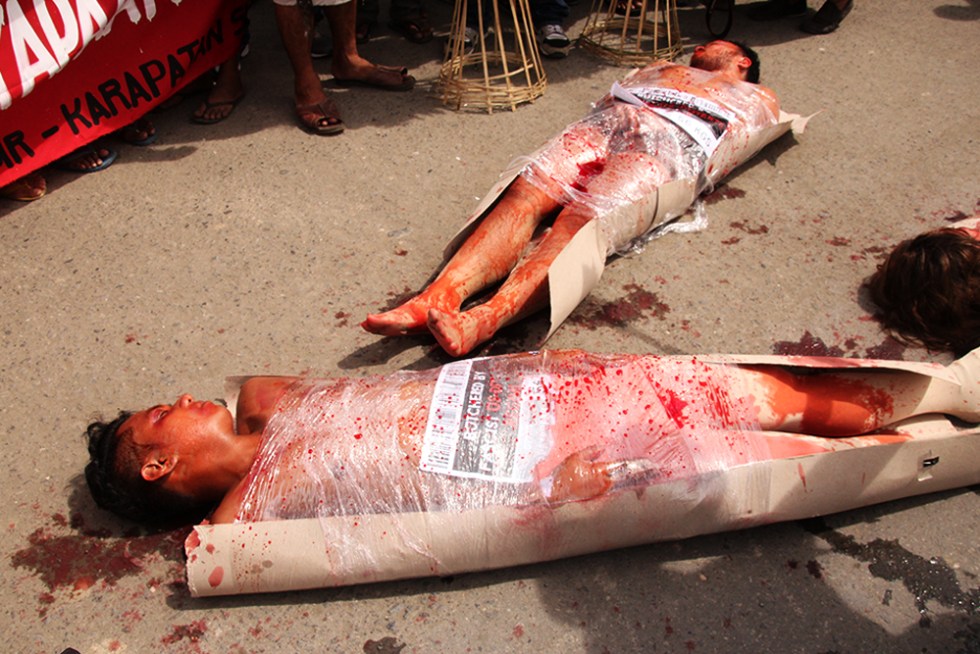 FILE PHOTO. At least 28 cases of killings involving environmental activists in Mindanao were recorded by the Kalikasan People’s Network since Martial law was declared by President Rodrigo Duterte in May 23, 2017.

DAVAO CITY, Philippines – The massive human rights violations committed against the Indigenous Peoples (IPs) or Lumads and peasants are designed to silence the opposition to the continuing operations of large-scale mining and plantations in Northern Mindanao and the rest of Caraga Region.

This was the assessment made by the environmental group Kalikasan People’s Network for the Environment or Kalikasan PNE.

“The military is trying to flush out the opposition to mining and plantation interests in Northern Mindanao and Caraga region,” said Kalikasan PNE Coordinator Leon Dulce.

Dulce pointed out that these Lumad and peasant leaders are the environmental defenders that continue to stand and oppose the large-scale mining and plantation operations in the said areas in Mindanao.

At present, these environmental defenders are protecting around 243,163 hectares of forest and agricultural lands within their ancestral domains and farmlands against the encroachment of these extractive and destructive projects in Northern Mindanao and Caraga Region, he added.

Hundreds of Lumad residents from Sitio Manluy-a, Panukmoan, and Decoy in Barangay Diatagon, Lianga town in Surigao del Sur fled from their homes after the Armed Forces of the Philippines (AFP) conducted a series of artillery bombardment and harassments last January 21.

On Jan.24, two Manobo farmers identified as Randel Gallego and Emel Tejero, all residents of Km. 16, Brgy. Diatagon went missing after they were allegedly fired upon by soldiers while hauling abaca products.

The families of the two farmers found their dead bodies at a military detachment six days after they were reported missing.

The 401st Infantry Brigade of the Philippine Army claimed that Gallego and Tejero were killed in a clash between soldiers and the New People’s Army (NPA) rebels.

But human rights advocates belied the military’s claim, saying that the two were unarmed civilians.

“The Lumad communities in Lianga are standing firmly against the coal and gold mining exploration and development projects attempting to grab lands and resources from their ancestral lands ensconced within the Andap River Valley Complex. For this, they are constantly being attacked by the military,” Dulce said.

These areas in Surigao del Sur are one of the largely militarized areas in Caraga region, prompting the exodus of IPs out from their lands due to the continuing presence of soldiers and paramilitary groups in their communities.

The police named the two leaders as “top NPA leaders” which Kalikasan PNE said is a “repeated accusation” to justify the illegal arrest.

“Goaynon and Udarbe are stalwarts of the struggles of indigenous people and peasants against agri-industrial plantations in Northern Mindanao. They have also effectively exposed military-affiliated indigenous paramilitary groups such as the New Indigenous People’s Army Reform who have been attacking Lumad lands to pave the way for mining deals,” Dulce said.

With the continued declaration of martial rule, Kalikasan PNE said that attacks against environmental defenders continue to worsen.

At least 28 cases of environmental-related killings in Mindanao were recorded by the group since it was first declared by President Rodrigo Duterte in May 23, 2017.

“The Duterte government is trying to depict our fellow environmental defenders as rebels or terrorists to justify the militarization of their bastions of natural wealth. We demand that Goaynon and Udarbe be freed and that military troops wreaking havoc in Lianga be withdrawn as soon as possible. Justice for the murdered defenders must be delivered and the bloody reign of Duterte’s martial law over Mindanao must be lifted immediately,” Dulce said. (davaotoday.com)