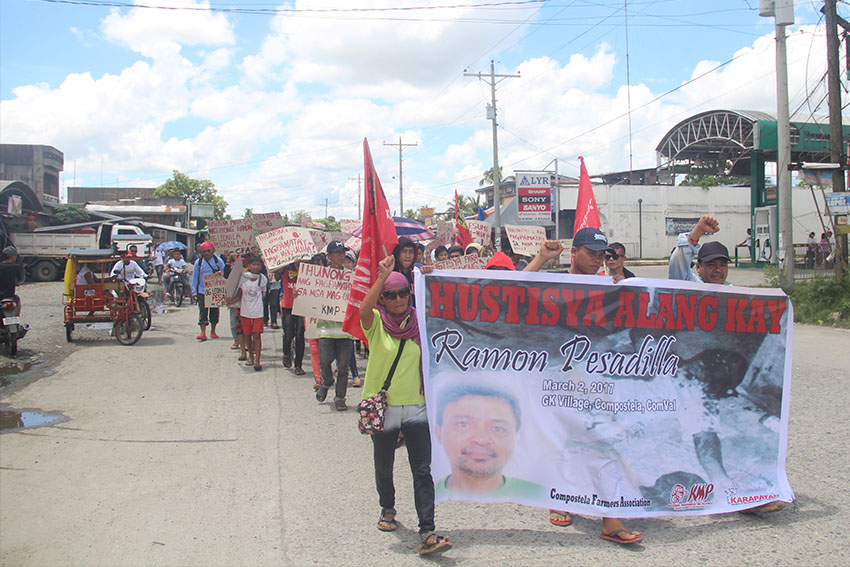 COMPOSTELA VALLEY, Philippines – The five -year old grandchild of the farmer-couple who were slain by armed men in Compostela town last week is the lone witness of the crime.

Popoy, not his real name, was the close grandchild of Ramon and Leonila Pesadilla, recounted how his grandparents were killed last March 2 in their own house at  Gawad Kalinga village, Barangay Osmeña in Compostela town, Compostela Valley Province.

At 9:30 p.m, two unknown assailants knocked on the door as the family was about to sleep, he said.  In response, Popoy’s grandmother opened the door and at gun point, the gunmen shot her and thereafter, the assailants went hurriedly inside Ramon’s room and shot him.

When Popoy heard the gunshot, he hid under his bed.

“I just hid under the bed, when the people were gone, I went out,” Popoy said. He said that he wanted to become a policeman to capture those who killed his grandparents.  He even promised his grandparents that he would study well once classes resumes in June this year.

Popoy’s father, Jimboy,38, immediately went to his parents’ house after his relatives, who lives nearby, told him about the incident. “Pag abot nako, gihakop nako akong ginikanan (When I arrived, I hugged my parents),” he said. 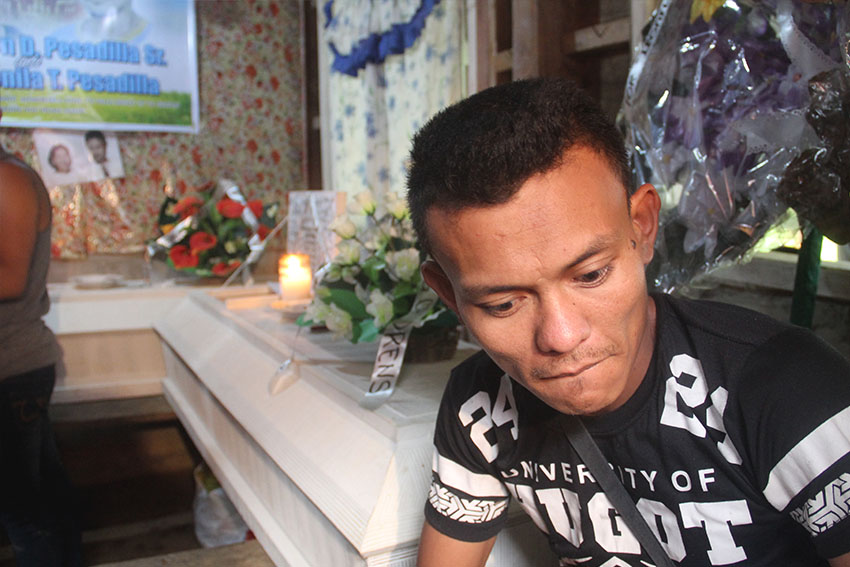 Jimboy Pesadilla recounts the time when he saw her parents’ dead bodies inside their house on March 2, 2017. (Earl O. Condeza/davaotoday.com)

An emotionally-charged Jimboy was clueless why his parents were killed. He said that his parents have no enemies in their community. Jimboy is the third child of the couple.

The Pesadillas are known for their generosity especially for the Lumad children.

“There are children from the community studying there [in the Lumad school],” he said. “Now, this is what they get in exchange?”

“Now that Mama is gone, we will continue their advocacy, to develop, to have more students, to have more education, many more will learn. Those who really need it,” Jimboy said.

The Save Our Schools Network in Mindanao said one possible motive of the killing  of the couple was their decision to donate a parcel of their land for the establishment of the Salugpongan Community Learning Center in Spur Dos, Barangay Osmeña.

The Lumad school was founded in 2015. Since its inception, it now caters 39 students from Grades 7 to 10.

The school is one of the Salugpungan Ta’Tanu Igkanugon Community Learning Center Incorporated (STTICLCI) in Mindanao. In 2015, the STTICLCI faced threats after the military tagged them as a school owned by the New People’s Army.

One of the Grade 7 students, Irish Joy Catalino said she was saddened with the death of the Pesadilla couple.

“We are saddened because behind their kindness, they were killed for no reason,” Catalino said.  She described them as a “very helpful couple.”

Catalino, who came from Trento in Agusan del Sur, said she transferred to Compostela due to economic hardships. She said to continue the advocacy of the couple for the Lumad children she will study hard to finish school and become a teacher.

“We will finish our studies so that we could go back here to teach in this school,” she said.

For her part, Jona Rose Baugto, vice chair of Compostela Farmers Association, attributed the death of the Pesadilla couple to their anti-mining stance. Baugto said the couple was active in campaigning against the entry of big mining companies in Compostela Valley Province.

“They campaigned against the entry of Agusan Petroleum and Minerals Corporation,” Baugto said. She also accused the military as the one who perpetrated the killing.

“They (military) are the ones who killed them,” she said, adding that the advocacies of the farmer-couple were the reasons why they were killed.

In a phone interview, Parungao told Davao Today that they do not have anything to do with the death of the couple.

“That is not a good accusation, because we do not have anything to with that (the killing),” Parungao said. He said they were accused because “it happened in our area of responsibility, that is why the accusation is thrown to us.”

He also said the CFA can file their complaint to the court.

Farmers’ group Kilusang Magbubukid ng Pilipinas said the attack against the Pesadillas “continues a pattern of attacks against the CFA.”

“They lost their secretary general Jimmy Saypan last October 2016, who was shot by a riding-in-tandem gunmen.  Their chairperson Bello Tindasan survived two assassination attempts on his life in 2015,” said Pedro Arnado, KMP-Southern Mindanao chairperson.< “This pattern of impunity and attacks on community leaders and defenders is awfully similar to the time of Arroyo and Noynoy Aquino’s administrations,” Arnado said.

He said 15 farmers and Lumad have been victims of summary execution in the past eight months. (davaotoday.com)