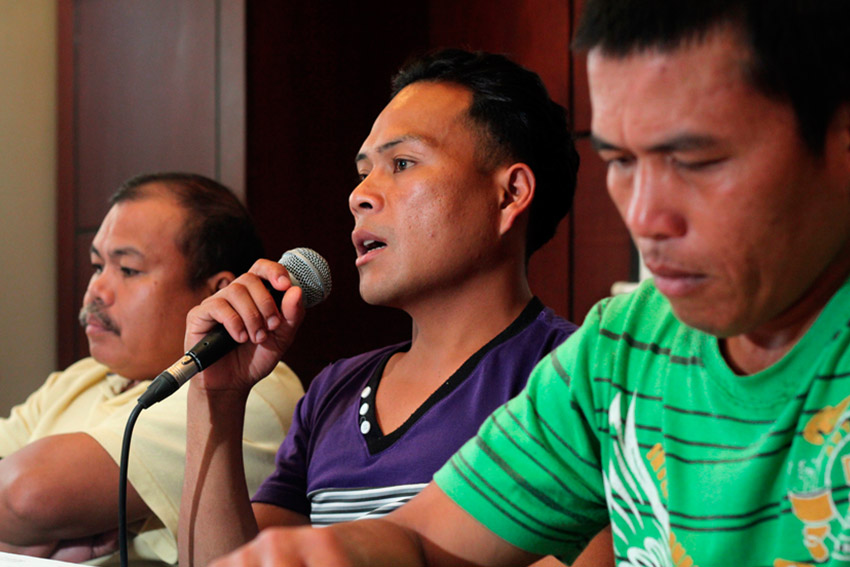 In this photo taken in March 2015, Danny Diarog, secretary general of Kahugpongan sa mga Lumad (center), calls on the National Commission on Indigenous Peoples to investigate the issue of land grabbing in their community. On July 15, 2016, Diarog and Hermie Alegre were attacked by still unidentified assailants. Alegre died while Diarog is in critical condition.  (Ace R Morandante/davaotoday.com file photo)

Correction: Herme Alegre was previously reported as a woman.

DAVAO CITY (Updated July 25, 2016 at 6:49 pm) — Armed men riding in tandem killed the secretary of a Parent-Teachers Association of a Lumad school here while his companion, a tribal leader was critically wounded in an attack on Friday afternoon in Barangay Manuel Guianga, Tugbok District here.

The victims were identified as Herme Alegre, 28, secretary of the Salugpungan School PTCA and Danny Diarog, 31, vice chairperson of the Kahugpungan sa Lumad and the tribal chieftain of Sitio Kahusayan.

The attack was reminiscent of the shooting of Diarog’s father eight years ago in the midst of their struggle to keep their lands.

Based on the Tugbok Police Station’s initial investigation, the shooting incident happened at around 1:00 pm in Purok 5, Bato Village, Barangay Manuel Guianga.

The two sustained gunshot wounds in different parts of their bodies and were immediately brought to Southern Philippines Medical Center for treatment. But Alegre was declared dead on arrival by the attending physician.

Jay Apiag, spokesperson of Karapatan Alliance for the Advancement of Human Rights told Davao Today in an interview on Saturday, July 16 that the two victims came from a meeting with the National Commission for the Indigenous People to talk about their ancestral domain when they were attacked. Both were members of the Bagobo Klata tribe, said Apiag.

Apiag said Alegre was coming in as substitute for the meeting for his brother in law, tribal chieftain Marcelo Guillego, Sr., of Barangay Diolo.

“Their meeting ended at around 11:30 am, and after that they went to talk to Barangay Captain Ruel Ayog to inquire about the birth certificate of Alegre’s children,” said Apiag.

Alegre is survived by his three children aged 4, 3 and a six-month old baby.

“After the shooting incident, Diarog was able to call Ayog to rescue them,” he said.

Police Senior Investigator Jack Leon Tilcag told Davao Today on Sunday, July 17 that they are still investigating the possible motive of the attack.

However, Tilcag mentioned that Diarog was involved in a previous land conflict. But he said they cannot yet assure if the killing to land dispute.

In an open letter dated April 23, 2009, the Pasaka Confederation of Lumad Organizations said they see no other motive in the strafing of the Diarogs residence that resulted to the death of the tribal leader and the wounding of his wife and children, but their struggle against Pastor Apollo Quiboloy who was expanding his church, the Kingdom of Jesus Christ, The Name Above Every Name within Diarog group’s ancestral lands.

“In 1997, the group of Quiboloy entered Sitio Kahusayan to build a prayer mountain for their sect, Kingdom of Jesus Christ, The Name Above Every Name. During the time, they surveyed the area together with the 73rd Infantry Brigade and started fencing the area putting No Trespassing and Private Property signages,” Pasaka said in its statement.

The group said those who opposed were threatened with some tribal leaders charged with robbery and malicious mischief. ”Some houses were burned,” Pasaka said.

Datu Dominador, known as Datu Doming, opposed to sell their land to the religious sect.

”During the first quarter of 2009, Datu Doming’s residence was burned four times, before the indiscriminate firing took place,” Pasaka said.

In a statement posted by Pastor Quiboloy on May 9, 2008 on their website, they denied the allegations linking their congregation to the killing of the tribal leader.

“We strongly deny these as totally false and baseless, if not ridiculous. We trust only the police and the military authorities in investigating the incident and coming up with their corresponding findings on the same,” the statement said.  (davaotoday.com)