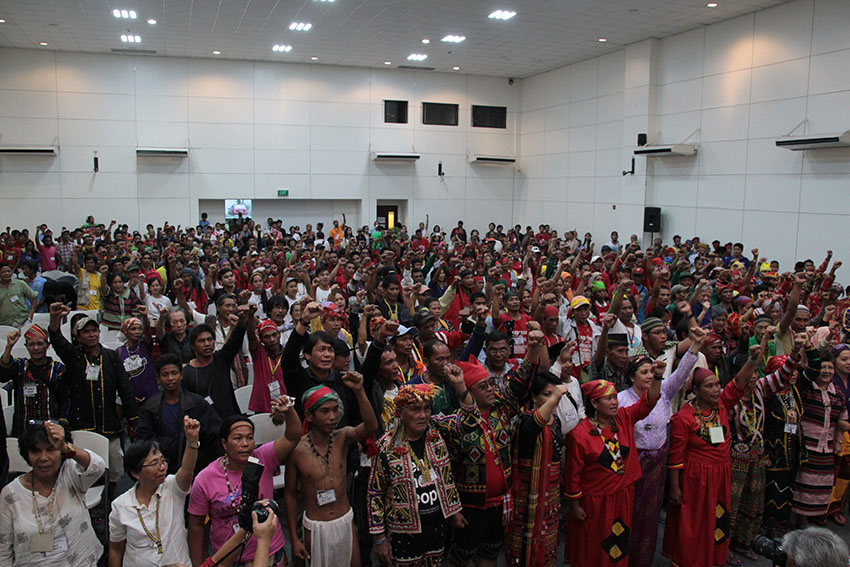 Over 3,000 Lumad and Moro activists from across the country formed Sandugo, an alliance of national minorities , on October 14 at the GT-Toyota Asian Center, University of the Philippines Diliman. (Paulo C. Rizal/davaotoday.com)

QUEZON CITY, Philippines – Leaders and representatives of  3,000 Lumad and Moro groups from all over the country formed a national alliance called “Sandugo: Kilusan ng Moro at Katutubong Mamamayan para sa Sariling Pagpapasya” (Alliance of Moro and Indigenous Peoples for Self Determination) at  the GT-Toyota Asian Center, University of the Philippines Diliman last Saturday.

Organizers said Sandugo is the Filipino word for blood compact which symbolizes the unity of the various ethnolinguistic groups.

The indigenous peoples and Moro groups travelled from their respective communities to participate in the Caravan of National Minorities that culminated in a “Grand Salubongan” at the Mendiola Peace Arch in San Miguel Manila last Oct. 13.

“We are being reminded of our history in terms of our unity in our fight against colonialism and our foreign invaders. [The fight] continues up until now because the national minorities are still facing the same problems. We are being united in the same blood, in the same struggle. This is the essence of our organization, the Sandugo,” explains Amirah Lidasan of Suara Bangsamoro, one of the conveners of the said group.

Sandugo is composed of national minorities from different groups across the country, including the Kalipunan ng Katutubong Mamamayan ng Pilipinas, Suara Bangsamoro, the Cordillera Peoples Alliance , and the Kusog sa Katawhang Lumad.

“Sandugo reflects the legacy of our ancestors and the sacrifice of those who gave their lives to defend the ancestral lands, territories, identity, culture and way of life which had been threatened by colonialism,” the group said in a statement.

Beverly Longid, global coordinator of the Indigenous Peoples Movement for Self- Determination and Liberation said that the IP and Moro people’s fight for self determination is no longer a simple matter of fighting for territory.

“Our struggle now is no longer just about merely fighting for our ancestral lands. It has become the fight for national democracy. We are the national minorities, and the problem of state oppression is one of our unique problems, but we are also Filipinos, all facing the three basic problems of feudalism, bureaucrat capitalism, and imperialism,” Longid said.

Sandugo passed its first two resolutions, one of which was addressed to the National Democratic Front which called for a separate clause in the Comprehensive Agreement of Socio Economic Reforms for the national minorities.

The second resolution, addressed to UP Diliman chancellor Michael Tan suggested to put up a “symbolic or non-symbolic kampuhan” which will become a resource for students wanting to know more about the national minorities and be a center for solidarity activities.  (davaotoday.com)