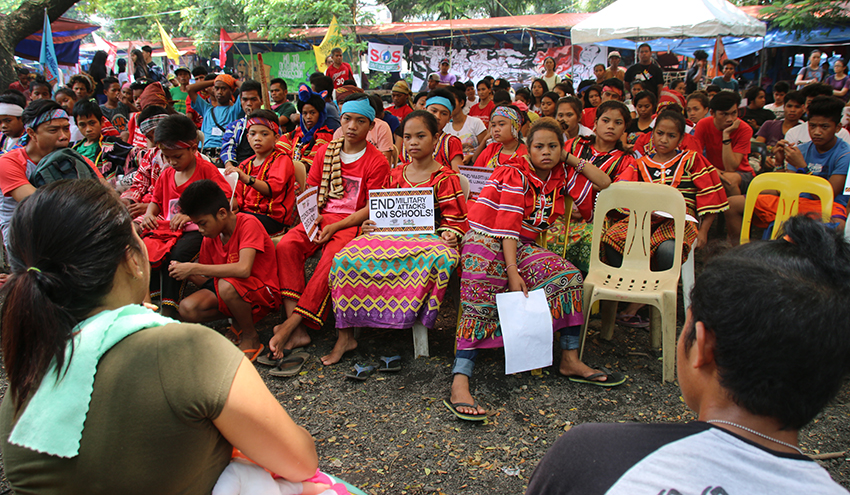 TOKHANG. Students from L​umad schools in Mindanao listen ​to Marian and Ryan as they narrate their nightmares ​in the intensified war against drugs known as “Tokhang” on Friday, Sept. 8. (Alex D. Lopez/davaotoday.com)

MANILA, Philippines – Lumad students from various parts of Mindanao who took part in this year’s Lakbayan of National Minorities got the chance to see face-to-face victims of the dreaded anti drug war​, ​known as “Oplan Tokhang”​,​ of the ​Duterte ​administration in an activity inside the Kampuhan in UP Diliman on Friday, September 8.

Both Ryan and Marian, not their real names, are now under the care of “Rise Up”, an organization formed by various religious groups in Metro Manila providing support to the victims of Tokhang.

Ryan and Marian claimed they ​are still in danger ​after they ​we​re ​allegedly target​ed​ ​in the war on drugs.

“That was the greatest nightmare I ever had in my life,” said Ryan, now at 19, as he told
​L​umad children of an incident last December 2016 in Caloocan City.

“We had a gathering at the house of my girlfriend. I was accompanied by three friends. We were so happy at that time. Suddenly, armed men in masks arrived. Then I heard gunshots, a lot of gunshots,” Ryan recalled.

He said he felt pain on his right side and realized that he was also hit. He fell to the ground and felt the blood from his wound. Then he heard voices of men and later he realized that the men were carrying him to an ambulance. And he passed out.

Ryan said it was already in the hospital when he learned that the house of his girlfriend was raided by the police and that there were suspected drug personalities killed.

After his stay in the hospital, Ryan said he asked the group Rise Up for help. At present, he is under the care and support of Rise Up and wishes that he could still pursue his schooling.

“Just like you I am also a student and I want to finish my studies,” Ryan told the lumad students.

Marian also related how she was able to go out from a secret cell which the police operate​s​ with the purpose of extracting money from the families of the victims in exchange for freedom.

She said that early morning on July 22 last year, in their residence in Navotas, armed men in masks entered their residence and instantly shot and killed her father. The armed men also took with them her older brother and two of her younger brothers.

By the afternoon of the same date, Marian said they found the body of her older brother in a funeral parlor outside Navotas while her two brothers were recovered from the police station in the area.

Despite the death of her father and brother, the police in the area continue to implicate the name of her husband into illegal drugs.

They decided to turn over themselves to authorities and clarify their names but still, the suspicion continued.

They decided to run and hide after the police shot and wounded her husband and in March this year she was arrested.

Marian said her arrest was not recorded by the police as she was brought to a secret cell where she stayed for four days.

The police contacted her family and asked for money in exchange for her freedom. The asking price was P100,000 but her family said they could not afford the amount. Then they settled at P60,000.

After the police took the money Marian said she was immediately released. Then she asked for assistance from Rise Up to ensure her safety, including her children.

Killing is the game

A student from ​L​umad school who was asked to speak on behalf of her classmates said sectors who stand up to defend their rights are being killed by state forces.

She also shared how the members of a paramilitary group in Davao del Norte shot and killed their classmate, Obillo Bay-ao last Sept. 5.