Mother of Ampatuan massacre victim appeals to suspects to surrender 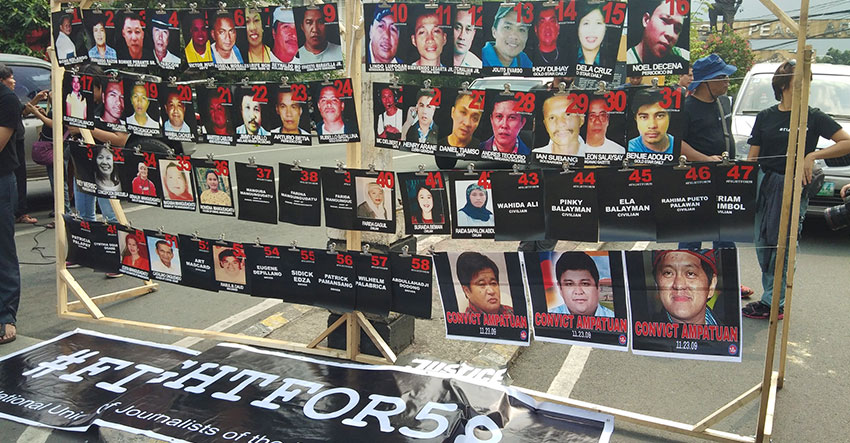 Photo from National Union of Journalists of the Philippines’ Facebook page

CAGAYAN DE ORO, Philippines – A mother of one of the victims of the gruesome Ampatuan Massacre appealed to its suspects to surrender and face the charges against them.

Catherine Nuñez, whose son Victor was a reporter to UNTV before meeting his fate in Ampatuan, made this appeal after one of the suspects was arrested in Misamis Oriental.

The suspect, Nasser Adan, was arrested on August 21 by authorities in Barangay Mohon, Tagoloan town in Misamis Oriental. Adan had been in hiding in the place bearing an alias and worked as a security guard in a manufacturing plant.

The suspect is said to be a member of the Ampatuans family’s “inner circle” and carries a P300,000 bounty on his head.

Nuñez said it would be better for the rest of the suspects who are still in hiding to turn themselves over.

“I hope they surrender and face the charges. Let the court decided if they are guilty or innocent. If they are innocent, they will be acquitted,” she said in a phone interview on Monday August 24.

Human right groups said there are around 80 suspects still at large prior to Adan’s arrest. 197 people were accused for committing the worst case of journalist killing where 32 media people perished along with 26 others on November 23, 2009 leading up to the 2010 elections.

28 persons were convicted for the murders on Dec. 19, 2019, including the members of the once powerful Ampataun clan that controlled Maguindanao.

Nuñez said her family is expecting to receive P2.1 million in damages.

Nuñez, who hails from Cotabato, has been living in one of the towns in Misamis Oriental even before her son was killed in 2009. In 2011, she was forced to stay in Manila for her safety when she was being tracked by unknown persons.

Nuñez said that through time she no longer felt the anger and resentment she used to have and no longer wish ill-feeling to the people involved in the massacre.

“At first I felt afraid. I was not aware that one of the suspects was living nearby. I thought they went to the mountains to join the rebels. But I told myself, I must not fear anymore. I leave it all to God for my protection,” she said.

“These people were just being used by the Ampatuans. They are victims too. It should be the Ampatuans who must be punished,” she added. (davaotoday.com)