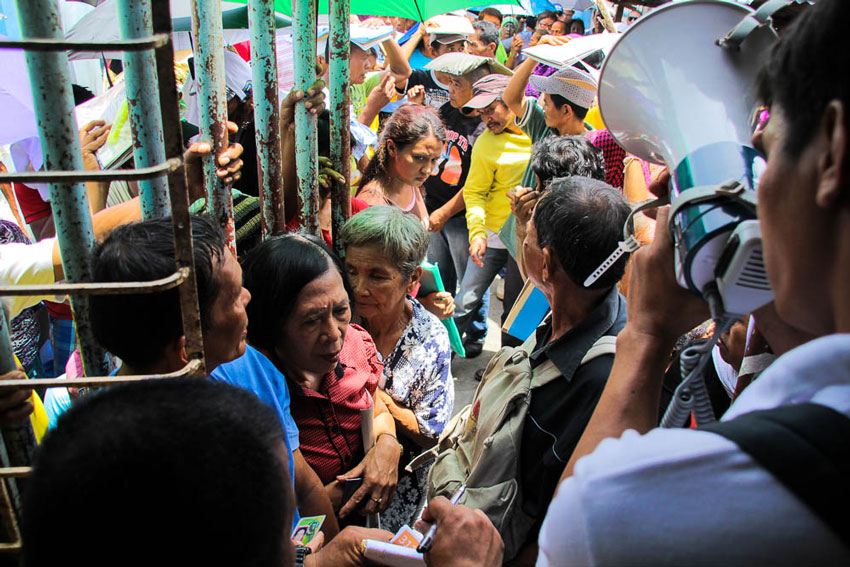 In this file photo taken in August 2014, Martial Law victims line up for claims in Davao City. (davaotoday.com file photo)

“No less than President Rodrigo Duterte instructed the board to render partial distribution of claims within 60 days. The HRVCB should stop making lame excuses and do their work in the reparation of victims, justice must be served immediately,” Marie Hilao-Enriquez, SELDA chairperson of Samahan ng Ex-Detainees Laban sa Detensyon at Aresto, said in a statement Monday.

Enriquez slammed the HRCVB for its “snail-paced system” after the board has failed to release the partial reparations to the thousands of Martial law victims who were adjudicated by this month.

“Their foot-dragging and excuses are tantamount to further aggravating the suffering of martial law victims.This insensitivity must be stopped. All the more they should find solutions rather than make alibis of bureaucratic processes that further delays the rendering of justice and recognition,” Enriquez said.

Two separate dialogues were held in Malacanang where it was agreed upon to release partial reparations. This was also confirmed by HRVCB head Gen. Lina Sarmiento who said they will begin the partial distribution of claims by the second quarter of this year.

“We presented the plan and the President expressed support. However, we are still bound to comply with all the processes required by law,” Sarmiento said.

HRVCB has adjudicated a total of 30,027 claims, noting that “before monetary reparations can be distributed, the list of 4,000 preliminary eligible claimants must be published, appeals or oppositions resolved, and the corresponding partial final list duly published. The resolution of appeals and opposition will be decided by the Board en banc.”

“Based on our timeline, we are on track. When we started work, we adopted a strategy of completing the evaluation of all 75,730 applications first. We contemplated partial pay-outs early on but opted to stick to full completion of the initial phase of adjudication in light of resource constraints. With the expression of commitment and support by the President, we are confident that the Claims Board will be able to make partial payments and complete the task of adjudicating all the claims within the period provided by law,” Sarmiento explained.

But SELDA argued that the number of claims, “is less than half the work done after a year into the extension of the Claims Board’s existence. Of the total processed only 9,000 were approved, with 4,000 of them already awarded points.”

“We will verify the report of the Claims Board that only about 3,000 of the more than 9,500 Hawaii class action suit plaintiffs filed claims with the HRVCB. We do not want another injustice again,” the group said. (davaotoday.com)