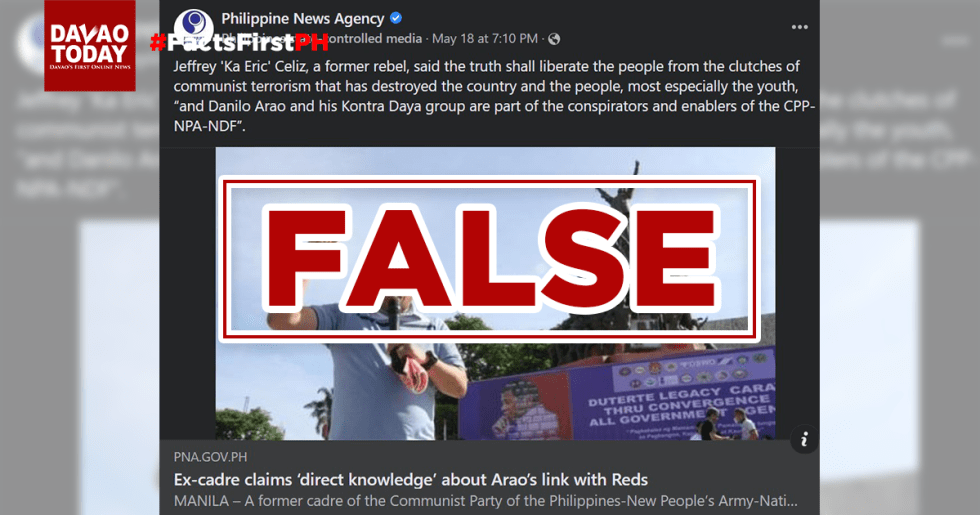 CLAIM: The Philippine News Agency (PNA) has published two articles dated May 16 and 18 which linked election watchdog Kontra Daya and its convenor UP Professor Danilo Arao to the Communist Party of the Philippines-New People’s Army-National Democratic Front (CPP-NPA-NDF).

PNA’s source of the reports is Jeffrey “Ka Eric” Celiz, the first nominee of party-list group Abante Sambayanan who claims he is a “former cadre” of the Communist movement.

Opinions, instigation of electoral fraud, and party-list manipulation, he added, are among the standard propaganda operation lines of the CPP-NPA-NDF and passed on by Kontra Daya as political analysis.

Celiz also claimed he has “direct personal knowledge about Danilo Arao’s involvement with the CPP-NPA-NDF as among the local communist terrorists’ urban operatives”. He claimed to have met Arao in April 1999 during during a five-day training and seminar-workshop on urban mass movement campaigns and propaganda operations, including the conduct of media operations in urban mass movement activities at a Laguna resort.

The said event, he said, was a joint activity of the CPP Central Committee staff organs, the National Organizations Department and National United Front Commission, where Arao helped facilitate. Similar activities, he furthered, was held in March 2011 in preparation for the May 2001 elections.

Kontra Daya (Against Fraud) is a broad campaign of various organizations and individuals- religious, artists, youth and students, lawyers, IT experts, teachers, government employees and ordinary Filipinos who commit themselves to oppose election fraud and other undemocratic practices during the election period.

It was formed in 2007 after the “Hello Garci” electoral fraud controversy under then President Gloria Macapagal Arroyo. It is a non-partisan election watchdog that focuses on the vulnerabilities of the electoral process and exposes corruption and electoral fraud.

In a statement released last May 19, Kontra Daya condemned the claim made by Celiz that they are a “project of the CPP”. Celiz’s allegation, it said, to “[expose] the CPP for infiltrating and sabotaging the integrity of the electoral process” has been refuted not only by Kontra Daya but also by reputable news media organizations, the courts, and even the Commission on Elections (COMELEC).

Kontra Daya identified Celiz as a “notorious red-tagger” who has baited various personalities. His ties with the National Task Force To End Local Communist Armed Conflict is also publicly known.

Celiz, Kontra Daya said, has lied about his academic credentials by claiming he graduated from UP in the late 1980s. He also falsely claimed, on national television, that Kontra Daya is accredited by the COMELEC. Celiz’s party-list group was flagged twice by Kontra Daya for “having dubious advocacies and having connections with the government/military”.

Kontra Daya cited the dangers of red-tagging which is the highest form of “fake news”. The act can get a person arrested, tortured or even killed.

Lexico.com, a collaboration of Dictionary.com and Oxford University Press, defines red-tagging or red-baiting as the harassment or persecution of someone “on account of known or suspected communist sympathies”.

The Order of the Carmelites, in a statement, said red-tagging media workers like Prof. Arao and the spreading of fake news must be stopped.

In a May 20 statement, research group IBON clarified that Prof. Arao was one of IBON’s senior staff in 1999 during the time that Celiz accuses him of involvement with the CPP-NPA.

IBON said that Arao worked with them for many years as Editor-In-Chief and Research Head while lecturing at the De La Salle University and UP-Diliman from 1994-2001. This was before he became a full-time UP professor and editor-board member of alternative media outfit Bulatlat starting 2001.

IBON said that holding trainings and seminars with a wide range of audiences including people’s organizations is part of their mission as a research, education and advocacy institution and Arao was a very able resource person for many of these.

“It is, however, delusional and malicious to say that these simple capacity-building activities are organized by the Central Committee of the CPP through Arao as alleged,” IBON said.

Bulatlat, through its managing editor Ronalyn Olea, said the PNA being a State-run agency “should observe the ethical standards of journalism, as government resources should be utilized for the public good” and not for “endangering the lives of the people, particularly those who are critical of the government.”

Kontra Daya said that by publishing the articles, PNA has ignored the highest standards of journalism.

The Order of the Carmelites also called on the PNA “to be more responsible in the exercise of its duty and responsibility” and “not allow itself to be used in the spread of fake and unverified stories and claims”.

It furthered that to publish stories and claims based on unsubstantiated and biased statements of individuals, especially those with questionable credibility, is a journalistic blunder.