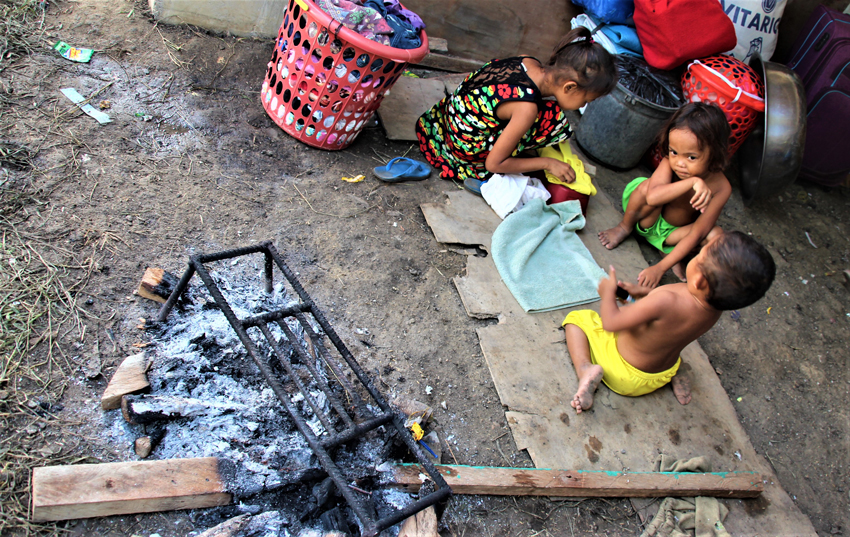 MAGUINDANAO, Philippines – As the Moro people celebrated Eid-ul-Fitr or the end of the Holy Ramadan on Friday, thousands of Moro people were crammed in evacuation centers four days after they were displaced by military aerial attacks.

The residents were finishing their 3 am sambayang (prayer) when they saw four planes hovering their area.

As the aerial attack reverberated and shook the ground, residents were preparing their early breakfast.

The ‘massive air and ground assault’ affected towns of Pagalungan in Maguindanao and Pikit in North Cotabato both portions of the Liguasan Marsh.

Nazrullah Pedticasan Payag, a civilian and father of 10 children, was reported as among the fatalities. His family is now staying in the municipal plaza of Pagalungan.

Seven-year old Hassan woke when he heard the bombs and the frantic shouts from his
mother.

Hassan’s mother packed their belongings and rushed to a nearby Dalgan Elementary School.

“It was still dark that time and I can hardly see, but my ina said to hurry up and follow her. I left behind my toy gun and my new ball,” Hassan told Davao Today.

On Friday, military and the local government officials urged the residents to return to their homes as the military operation moved on to other communities.

But the 1,173 families or 7,038 individuals staying at the Pagalungan Municipal Compound refused to return to their communities.

In an interview with evacuees from Sitio Wata, they said they were afraid to return homes since they heard the government troops were still in the area.

They are also uncertain if they still have homes to return to.

One of the residents, Jerry Dalgan, said he’s worried that he already lost the animals he hastily left behind.

“We have horses and cows back home. We left it behind because the bangka (wooden boat) cannot carry them. I’m wondering if they are still alive right now,” Dalgan lamented.

Evacuees also complained over the poor conditions at the evacuation centers.

At the Pagalungan Municipal compound, evacuees used tarpaulins and empty sacks as sleeping mats and were given only five kilos of rice and canned goods as food rations.

“Good thing that we are still in Ramadan that we can budget our meals, but still it’s not even enough,” said Dalgan.

Some of the children and adults in evacuation center were also diagnosed with fever, cough, and colds, according to a municipal health center staff.

Maguindanao 2nd, District Rep. Zajid ‘Dong’ Mangudadatu estimated the natural gas reserve of US$1 trillion or roughly around 50 trillion pesos that came out with a prospect of 68 billion cubic feet of natural gas based on the Energy exploratory project conducted by Philippine National Oil Company in 1994. (davaotoday.com)