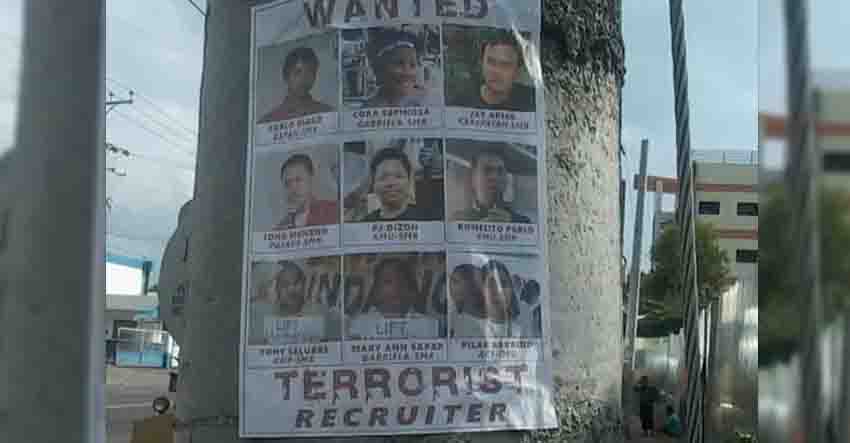 DAVAO CITY, Philippines – Progressive groups cried foul over posters spreading in different areas of the city this week that tagged their leaders as terrorists, as the controversial Anti-Terrorism Act (ATA) takes effect this week.

Printed on top of the poster is “WANTED” with photos of various prominent activist-leaders in the region tagging them as “Terrorist Recruiter.” The posters bear no signatories.

The Regional chapters of Gabriela, Kilusang Mayo Uno, and Karapatan issued statements of condemnation on this propaganda.

Jay Apiag said in a statement that the red-tagging and terror-tagging tactics against activists are “nothing new,” but the anti-terror law puts their lives at risk.

“With this recent terror tagging of activists and me as a rights champion, I am feeling a sense of danger in my security as I usually attend court hearings of several political prisoners and leading quick response teams whenever there are reported cases of rights abuses in various communities we serve,” said Apiag in a message sent to Davao Today.

The group said the law will only embolden authorities to commit more human rights violations with more impunity.

Under the ATA, suspected individuals can be arrested without a court warrant and they can be detained for a maximum of 24 days without charges being filed against them.

Apiag said that the intensified terror-tagging on the onset of the implementation of ATA refutes the claims of officials that activists and their right to expression and advocacies are safeguarded.

“What this show is the clear purpose of the law, and that is to silence critics and dissenters, and even citizens who want to raise their valid complaints to the government. It does send a warning, but we are not backing off. We will not choose silence,” Apiag added.

Kilusang Mayo Uno-SMR Secretary General Carlo Olalo slammed the incident as a “desperate act of the state” to quell the growing dissent of the public for the “government’s incompetent response” to the health crisis.

“Instead of addressing the real problems aggravated by the pandemic such as unemployment and economic crisis, the government through its armed forces has more time in silencing its critics,” Olalo said in a phone interview.

Olalo added that they have already sought help from their counsels for appropriate legal actions.

The youth group Anakbayan-SMR also denounced the smear campaign and assailed that the government should have instead allocated its resources to implement mass testing and financial assistance for those affected by the pandemic.

The group also urged residents to document and voluntarily remove any malicious materials vilifying legitimate organizations that can be seen in Davao City. (davaotoday.com)