A​rmy cries foul over mutilation of troops in combat 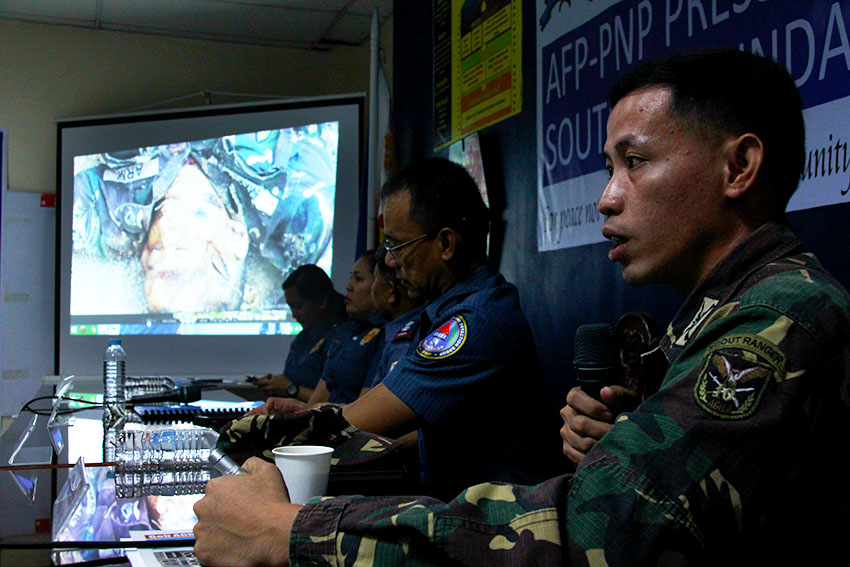 In a press conference in Davao City on Wednesday, August 10, Army spokesman of the 10th Infantry Division, Capt. Rhyan Batchar, shows a photo of one of the slain soldier in a series of offensives by the New People’s Army in Monkayo, Compostela Valley.(Paulo C. Rizal/davaotoday.com)

DAVAO CITY — The Army here criticized the New People’s Army over the mutilation of soldiers who died in gunbattle last week in Monkayo, Compostela Valley Province.

Captain Rhyan Batchar, spokesperson of the Army’s 10th Infantry Division, said an autopsy on the four fatalities indicated mutiliations on two of the four slain soldiers.

Four soldiers died in a series of offensives by the NPA in Monkayo, Compostela Valley province.

Another soldier who died in the said incident, Corporal Gilmar C. Mapa, was said to have suffered mutilation, but could not be autopsied as per request of the family.

“We condemn to the highest degree itong ginawa ng NPA sa ating mga kasundaluhan. We are celebrating this month the International Humanitarian law, pero our troops have to suffer the barbaric and inhumane acts of the NPA,” Batchar said.

While saying that they will press charges, Batchar said the Army supports the peace talks.

“We hope that this incident will not derail the peace talks between the government and the  CPP-NPA-NDF. We are all Filipinos,” Batchar said.

In response to the Communist Party of the Philippines’ (CPP) statement that the use of command detonated explosives (CDX) are “legitimate weapons of war and are allowed under the Geneva Conventions and the Ottawa Treaty on Landmines,” Batchar said that no such distinction exists.

Citing the Comprehensive Agreement on Human Rights and the Respect for International Humanitarian Law (CARHRIHL), Batchar says that the use of landmines are prohibited, and that there is no distinction because the effects are the same.

Batchar also said that there were civilian casualties in the encounter at Monkayo, Compostela Valley, an elder woman and her grand daughter, who was 12 years old.

This is contrast to the CPP’s statement that there is yet to be any civilian casualties in their use of the “CDX”.

“There has yet to be an incident where a CDX landmine laid by the NPA was accidentally exploded by a civilian. The NPA is very careful about using weapons that may accidentally hurt or injure civilians,” the CPP said in a statement on August 8.

President Rodrigo Duterte on Wednesday, reiterated his warning to the CPP on using landmines during his visit to the 1st Infantry Division Headquarters in Labangan, Zamboanga del Sur on Wednesday afternoon, August 10.

“Ingon nako sila makadungog pa gani ko bisan isa nga naay sundalo sa Armed Forces of the Philippines or police nga mamatay maangol, masamdan, then forget , ingon nako wala na tay peace talks, bahala na mo (I said if I heard another explosion where a soldier of the AFP or police will die or will be injured, then forget about the peace talks),” Duterte said.

This was also his message to the CPP during his visit in Naval Station Felix Apolinario here at the wake of four soldiers on Sunday, August 7.

However, the CPP said that the NPA will not stop using CDX landmines.

“Contrary to Duterte’s demand for the NPA to stop using its CDX landmines, the NPA and the people’s militias must further expand the use of such weapons,” said the CPP.

It added: “CDX landmines are a poor man’s weapon. These are mass-produced by people who have no recourse to the expensive rockets and howitzers of state-funded armies. It is a weapon than can only be effectively used by those who have mastery of terrain. It must continue to be effectively and widely employed in waging mass guerrilla warfare.”

The CPP even ordered the “stepping-up” of the manufacture of CDX landmines.

“Every unit of the NPA, including all units of the people’s militias, must have their own supply of CDX landmines, and must have the skill and plan to employ these as defensive and offensive weapons against the enemy,” it said.

“CDX landmines have been proven to be highly effective weapons at thwarting the frenzied military offensives of the AFP,” said the CPP.

“This is the reason why the AFP has been so adamant in its demand for the NPA to stop using CDX landmines to the point of mindlessly citing international prohibitions even without a comprehensive and clear understanding of those,” it said. (With a report from Zea Io Ming C. Capistrano/davaotoday.com)