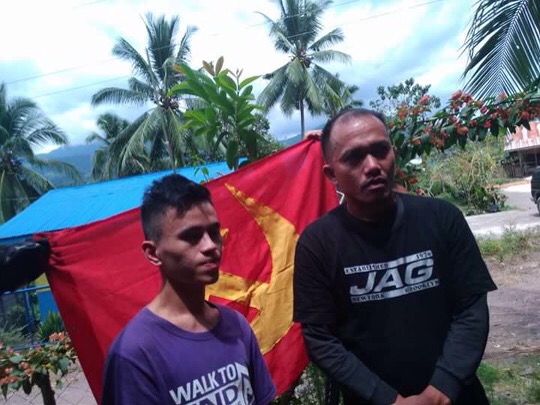 CAFGU Active Auxiliary members Carl Mark Nucos (left) and Rene Doller are freed by the New People’s Army on Friday, Mar. 24 in Barangay Don Salvador Lopez Sr., in Mati City. The two were taken by the NPAs as their “prisoners of war” on February 14, 2017 in Lupon, Davao Oriental. (Zea Io Ming C. Capistrano/davaotoday.com)

MATI CITY, Davao Oriental (Updated as of 12:52 pm)— Nine days prior to the resumption of the formal peace talks set between the government and communists come April, the New People’s Army freed two members of the Civilians Auxiliary Force and Geographical Unit in a village here on Friday afternoon.

Rene Doller, 34, and Carl Mark Nucos, 24, both of the 72nd Infantry Battalion CAFGU were released in Barangay Don Salvador Lopez Sr. around 1pm Friday. The two were taken as prisoners-of-war at a mobile checkpoint of the Communist rebels in Barangay Don Mariano Marcos in Lupon town, Davao Oriental on February 14.

The release was facilitated by Bishop Hamuel Tequis and Reverend Jurie Jaime of the Exodus for Justice and Peace and Provincial Board Member Louis Rabat.
According to the release order signed by Rubi Del Mundo, representative of the National Democratic Front of the Philippines in Southern Mindanao region, Doller and Nucos “exhibited remorse for his offenses and voluntary desistance from committing further crimes against the people and the revolutionary forces.”

Del Mundo said the Order of Release is also “the NDFP’s favorable response to the appeals of the prisoners’ (families) and relatives and well-meaning parties and individuals who have expressed support for the negotiated settlement on the issue of Prisoner of War within the purview of the CARHRIHL and the Geneva Conventions and Protocol 1.”
Doller was received by his father, Rodulfo Doller while Nucos was welcomed by his sister-in-law, Mary Ann Nucos.

Doller said the NPA “respected us.”

Nucos, for his part, also thanked the NPAs for their fair treatment. “Dako akong pasalamat na giayo mi nila og tratar (I am very thankful that they treated us well),” said Nucos.

On February this year, the National Democratic Front in Mindanao announced that it would release the six prisoners of war who were arrested earlier this year.

The NDFP said the release of Doller and Nucos, who were captured by the NPAs on February 14, were carried out as a gesture of goodwill for the resumption of the peace talks.

“These are also in response to the request of the families and loved ones of the POWs, as well as to the call of various concerned sectors in society,” it said.

Other remaining POWs believed to be in the custody of NPA were PFC Edwin Salan, captured in Alegria, Surigao del Norte on January 29; 2. Sgt. Solaiman Calucop and 3. Pfc Samuel Garay, captured in Columbio, Sultan Kudarat on February 2; 4. PO2 Jerome Natividad, captured in Talakag, Bukidnon on February 9.
NDFP said the actual safe release of these abovementioned POWs however can only be realized if and when the AFP, the PNP and the Local Government Units (LGUs) give their full and undivided cooperation.

“The NDF-Mindanao, therefore, encourages GRP President Rodrigo Duterte, who himself is a veteran at facilitating POW releases, and the LGUs concerned to direct the AFP to implement a temporary suspension of military operations (SOMO), and the PNP, a suspension of police operations (SOPO), in areas which the NDF in the region concerned will specify and announce soon,” the NDFP emphasized.

The fourth round of the GRP-NDFP peace talks will be held on April 2-6 in the Netherlands.(davaotoday.com)