Activists gear up for Donald Trump’s visit in PH 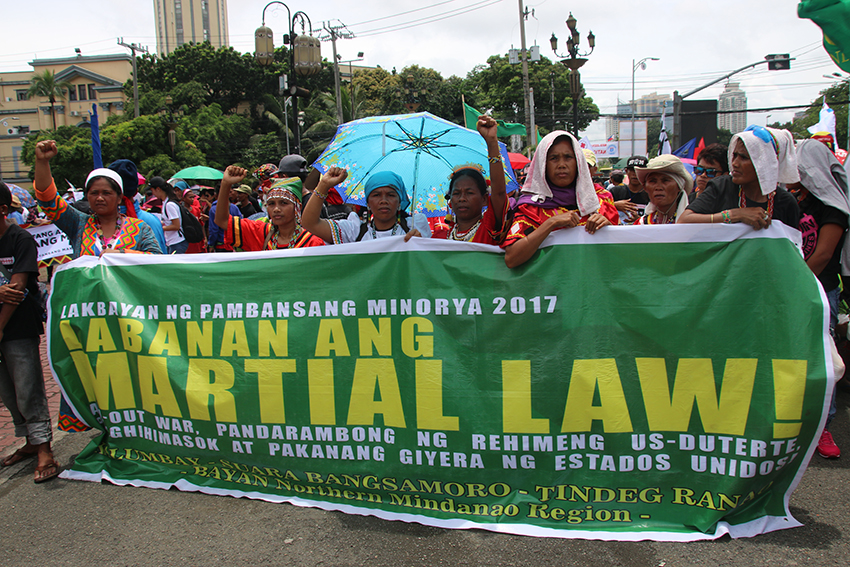 TRUMP & DUTERTE. Lumad and Moro delegates of the Lakbayan of National Minorities burn an effigy that represented US President Donald Trump and Philippine President Rodrigo Duterte in a rally near the US Embassy in Manila on Friday, September 15. (Alex D. Lopez/davaotoday.com)

TAGUM CITY, Philippines — Activists vowed to greet United States President Donald Trump with a series of protest actions once he arrive in the Philippines for the East Asia Summit on November 10.

Bagong Alyansang Makabayan (Bayan), in a statement over the weekend, said activists will be holding protest actions in Manila and in Clark, Pampanga, the venue of the East Asia Summit.

“The US president will be hounded wherever he goes,” the group said, adding that similar protest actions will be held in Japan and South Korea.

In Manila, the militant group prepares a “Trump effigy” which they said to “depict the US leader as the fascist CEO of US imperialism.”

Also to boost their protest action online, Bayan said it is slated to kick-off the #BanTrumpPH campaign next week.

News of Trump’s extended stay in the Philippines was learned after the Palace welcomed the White House’s announcement that the leader of the “free-world” would extend his stay in the country to attend the EAS.

The group stressed that his last minute decision to join the EAS appears “to be damage control, a desperate move to project strong US leadership during a crisis-filled presidency.”

“Trump seeks to maintain the grossly unequal relations between the US and the Philippines. He wants to make the Philippine government and Duterte proxies in the US conflict with North Korea,” said Bayan.

Bayan added that “Trump seeks expanded US military presence in the Philippines, in the guise of fighting ISIS, to be able to project US military power in the region against China.”

Apart from Bayan, The ILPS-Philippines will host a gathering of anti-war activists from Korea, Japan, China, Australia and other countries to discuss the conflicts in West Asia (Middle East), Korean Peninsula, South China Sea, the Pacific and the rest of the world.

The one-day Asia-Pacific Conference, according to the group, is a build-up towards protest actions as President Rodrigo Duterte chairs the 50th ASEAN and the EAS.

On Saturday, the Palace welcomed the White House’s announcement that US’ Trump would extend his stay in the country to attend the EAS.

“The President looks forward to engaging President Trump in the productive dialogue at the ASEAN-US Commemorative Summit and the EAS,” Presidential Communications Secretary Martin Andanar said during the radio briefing aired over “Radio Pilipinas.”

The EAS is an annual meeting of national leaders from the East Asian region and adjoining countries. The 12th EAS will convene in Angeles, Pampanga on Novembers 13 and 14 this year.

Andanar said that EAS would be the perfect time for ASEAN and other partnering countries to resolve current issues. (davaotoday.com)