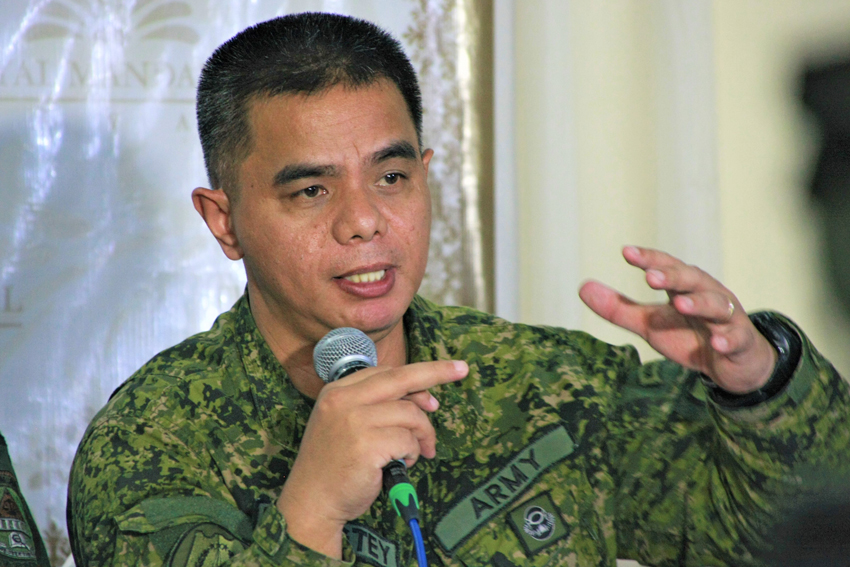 DAVAO CITY, Philippines – The Armed Forces of the Philippines-Eastern Mindanao Command urged businessmen to coordinate with the military and other local authorities after the recent reported burning of heavy equipment allegedly by the New People’s Army (NPA) in three areas in Davao City.

AFP-EMCs public information officer Major Ezra Balagtey, in a press conference on Wednesday, said they are trying to develop the Investment Protection and Security Operation Mechanism (IPSOM) to protect construction companies in the region.

Balagtey said that under the IPSOM, AFP units will coordinate with construction firms for any threats in their respective construction areas.

For its part, Presidential Adviser on the Peace Process Jesus Dureza last Monday lashed at the NPA for the senseless destruction of heavy equipment in Davao City.

“The act unnecessarily squanders whatever gains we have been quietly getting lately in our common effort with the rebels to return to the negotiating table,” said Dureza.

In response, National Democratic Front of the Philippines chief peace negotiator Fidel Agcaoili said Dureza should direct any complaints through the proper channels instead of using these as a scapegoat for difficulties in resuming stalled negotiations.

Agcaoli refuted Dureza saying “what about, the continuing killings of NPA fighters, even those unarmed and undergoing medical treatment the continuing arrests, detention, threats and harassment of open legal activists and even UN rapporteurs, and the terror attacks against communities, occupation of schools and public places like health centers that have led to forcible displacements of tens of thousands of residents?

NDFP also said the Joint Monitoring Committee under the CARHRIHL (Comprehensive Agreement on Respect for Human Rights and International Humanitarian Law) can address complaints raised by the Philippine government against the NPA.

Meanwhile, in his privileged speech during the City Council’s regular session on Tuesday, Councilor Danilo Dayanghirang challenged the NDFP to review its “strategy and methodology” in advancing their struggle.

Dayanghirang said “I hope the leadership of the NDFP and the NPA will review its methodology, its strategy to advance what they are fighting for. We have the same purpose and that is to elevate and emancipate the life of Filipino people from poverty.”

He proposed that instead of destroying properties, the NDFP should allow progress and parallel to that is to participate in the electoral process.

NDFP’s Fidel Agcaoili clarified that the NPA unit operating in the area has not yet issued any statement regarding the incident.

Agcaoili urged the councilor to “look deeper” in the situation of exploited Filipinos and why they joined the armed revolution.

“The semifeudal and semi-colonial social system has been with us for more than a century. Our people have suffered so much despite the good intentions of well-meaning people to institute reforms. yet the ruling classes of big landlords, compradors and corrupt high government officials have refused to heed the peoples demand for change. So the people have no other recourse but rely on their own efforts to bring about radical social change in the country,” said Agcaoili.

He maintained that the stalled peace talks between the government and the NDFP is supposed to address the roots of the armed conflict in the country.

“Precisely, the peace negotiations,” Agcaoili added, “are meant to address the roots of the armed conflict, forge agreements that would bring about basic social, economic and political reforms, and lay the foundation for a just and lasting peace in the country.” (davaotoday.com)