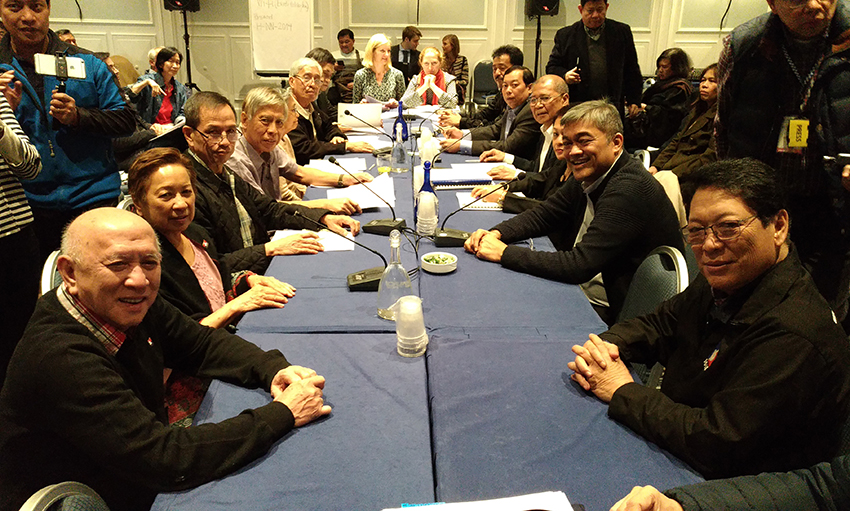 DAVAO CITY, Philippines – Is the issuance of Proclamation No. 360 enough to terminate the peace talks between the government and the communists?

Legal consultants of the National Democratic Front of the Philippines (NDFP) said it is “merely a unilateral announcement” that cannot automatically terminate the negotiations.

Lawyers Edre Olalia and Rachel Pastores said the government should still send a written notice to the appropriate entity of the NDFP who will later acknowledge its receipt.

“The termination shall technically be deemed effective only after 30 days from such receipt. This is in fact to the mutual interest of both Parties,” the legal counsels said.

As of November 27, Fidel Agcaoili, who chairs the negotiating panel of the NDFP, said they have not yet received a formal communication from the Government of the Republic of the Philippines (GRP).

“But we expect that they will send it to us soon,” he told Davao Today over a Facebook interview.

Agcaoili explained that the method of terminating the peace negotiations is detailed in the Joint Agreement on Safety and Immunity Guarantees (JASIG) signed by the parties on February 24, 1995.

JASIG provides immunity to negotiators and consultants, including staff and other personnel who participate in the said negotiations.

Specifically, it protects them from “surveillance, harassment, search, arrest, detention, prosecution and interrogation or any other similar punitive actions due to any involvement or participation in the peace negotiations.”

The agreement also states that immunity clause shall cover “all acts and utterances made in the course of and pursuant to the purposes of the peace negotiations.”

It can only be terminated “by written notice given by one party to the other.”

“In this latter event, this Joint Agreement shall be deemed terminated 30 days after receipt of the notice of termination,” it added.

The legal counsels of the NDFP also stressed the need for the parties to observe the agreement.

They said the termination of talks “cannot be done implicitly or by mere inference or deduction.”

Terminating the talks based on a one-sided decision, they said, would violate the character of peace negotiations established in the 1992 Hague Joint Declaration.

“Otherwise, who in his right mind would want to deal with, much less negotiate or agree, with a party who invokes the rules when useful or favorable to it but ignores, abandons or violates them when they are not?” the consultants said.

Under the Hague Joint Declaration, an agreement signed by former President Fidel Ramos and NDFP Chairperson Manuel Romero at The Hague in The Netherlands, parties agreed to engage in formal talks to resolve the armed conflict.

It states that: “The holding of peace negotiations must be in accordance with mutually acceptable principles, including national sovereignty, democracy and social justice and no precondition shall be made to negate the inherent character and purpose of peace negotiations.”

The four substantive agenda of the talks was also outlined in the joint declaration.

“Without the proper procedure mutually agreed upon for the effective termination of the peace negotiations being observed, one party cannot simply renege on its commitments, dishonor its own signature, and throw away all agreements that should be honored,” the lawyers said.

Not the first announcement

The issuance of Proclamation No. 360 was the first formal document released by the government to announce the termination of talks.
However, it was not the first time President Duterte proposed to terminate it.

In February, only days after the government and the NDFP concluded the third round of talks in Rome, Italy, Duterte announced he is not resuming talks with the communists after an offensive action of the New People’s Army (NPA) killed government soldiers in Bukidnon province on February 2.

He then ordered the arrest of all NDFP negotiators who were released to participate in the talks.

The fourth round of the formal talks resumed in April and was successfully concluded with the two parties agreeing to fast track the signing of the Comprehensive Agreement on Social and Economic Reforms; and an Agreement on an Interim Joint Ceasefire (CASER).

The fifth round of talks, however, suffered a setback with the government refusing to participate due to “lack of a compelling reason.”

The government and the NDFP were on two opposite sides of the fence: the government wanted the NPAs to end the offensives against government troops and its collection of “revolutionary taxes.” On the other hand, the NDFP wanted the signing of the CASER that details agrarian reform.

When July came, President Duterte again announced that there would be “no more talks.”

Despite that, backchannel negotiations were held, and initially, the talks were targetted to resume in August or September.

Before the most recent announcement to discontinue the talks, the parties have initialed the drafts on the CASER in a series of unannounced meetings held from October and November. (davaotoday.com)