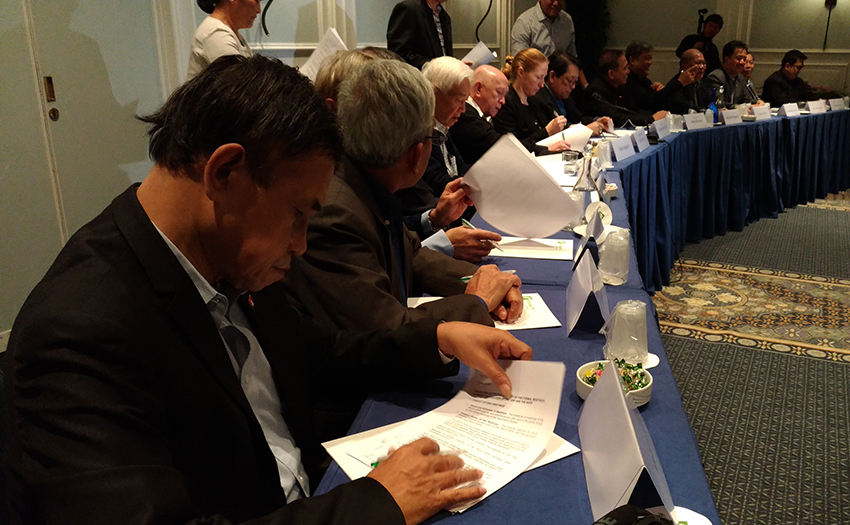 The peace panels of the government and the National Democratic Front of the Philippines sign the ground rules for conduct of the meeting of the reciprocal working committee on social and economic reforms during the third round of talks in Rome, Italy on January 2017. (davaotoday.com file photo)

DAVAO CITY, Philippines – The National Democratic Front of the Philippines (NDFP) released its latest draft of the Comprehensive Agreement on Social and Economic Reforms (CASER), a document which they say is a guide to an inclusive economic development in the Philippines.

Published on January 21, the draft is a 180-page document released by the Reciprocal Working Committee on Socio-Economic Reforms (RWC-SER) of the NDFP. The draft will precede a book which they will publish next month.

The NDFP said they published the draft online “amid the public furor brought about by the Tax Reform for Acceleration and Inclusion Law (TRAIN), a meltdown of the public transport system, the largest contraction in employment in 20 years, proposals for charter changes that will institute dictatorial rule and increased attacks on the Filipino people’s sovereign, civil, political, economic and cultural rights.”

It maintained that “a genuine program for agrarian reform and national industrialization directly addresses the roots of the armed conflict in the country and is the way to economic development.”

The publication includes the draft’s executive summary, which was issued last September 2017.

The RWC-SER NDFP describes CASER as an immediate program for real social and economic progress that is “realistic within current political and legal processes and can be implemented by the current administration” and its succeeding non-revolutionary governments.

Days before President Rodrigo Duterte signed the Proclamation No. 360 canceling the talks in November last year, the bilateral teams of the government and the NDFP initialed draft documents on socio-economic reforms.

Duterte offered to talk with Sison privately which the latter accepted saying it would be a good venue to talk about the resumption of peace talks and as long as they meet in a neighboring country.

Below is the NDFP’s draft of the CASER:

View this document on Scribd
comments powered by Disqus