Ceasefire, amnesty up in 2nd round GRP-NDF peace talks 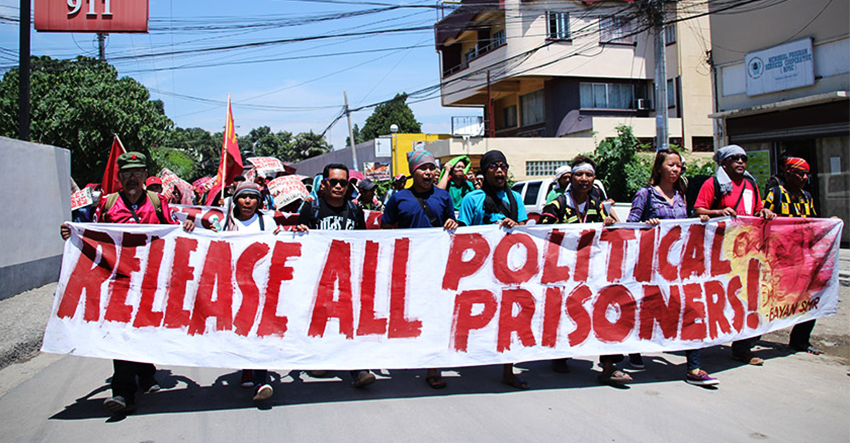 Farmers and Lumad march from the
the National Commission for Indigenous Peoples Region XI office to the Benigno S. Aquino Hall of Justice in Ecoland, here to call for the release of political prisoners and the dismissal of “trumped up” charges against them on Wednesday morning, August 24. (Paulo C. Rizal/davaotoday.com)

DAVAO CITY, Philippines — Both the negotiating panels of the Philippine government (GRP) and the  National Democratic Front (NDF) will exchange drafts on a proposed bilateral ceasefire and an amnesty proclamation as  the second round of peace talks  will resume in Oslo, Norway on Thursday, October 6.

In a statement on Monday, Presidential Adviser on the Peace Process Jesus Dureza said the peace panels plan to come up with a ceasefire agreement that will include joint monitoring of the ceasefire by a third party overseer.

“The previous ceasefires were unilateral. We need to craft mechanisms to monitor violations and resolve conflicts and issues arising from them,” Dureza explained.  He added that the government is eyeing a more permanent cessation of hostilities.

“These can only be done if we are able to agree on the more substantial issues of social and economic reforms. These are the more contentious issues and we expect humps and bumps during the peace negotiations,” Dureza said.

Both panels have already crafted drafts on the Comprehensive Agreement on Social and Economic Reforms (CASER), the topic of which is described as the ‘meat’ of the peace talks.

Dureza said the inspiration provided by President Rodrigo Duterte will enable both parties to pull the peace process through.

“He may not be capable of elegant language, as you have noticed, but he has pure spirit and heart in wanting to have peace in the land,” Dureza said on Friday, September 30, at the closing ceremony of the Month of International Peace.

Meanwhile, GRP peace panel head and Labor Secretary Silvestre ‘Bebot’ Bello III said a draft amnesty proclamation that enables the release of the political detainees is ready for submission during the second round of peace talks.

“The list (of prisoners) has been narrowed down to just over 400 from a high of more than 500. As per agreement during the formal resumption of the peace talks in August, the proclamation will only cover NDF members currently detained,” Bello said.

Bello pointed out that Duterte, with the concurrence of Congress, could declare a general amnesty once the peace talks are brought to a successful conclusion.

He, however, noted that both negotiating panels will “also have to hurdle issues on political and constitutional reforms in addition to the social and economic reform agenda for the peace talks to succeed,” adding that the government   is confident it will be able to strike a deal with the revolutionary forces by August next year.(davaotoday.com)