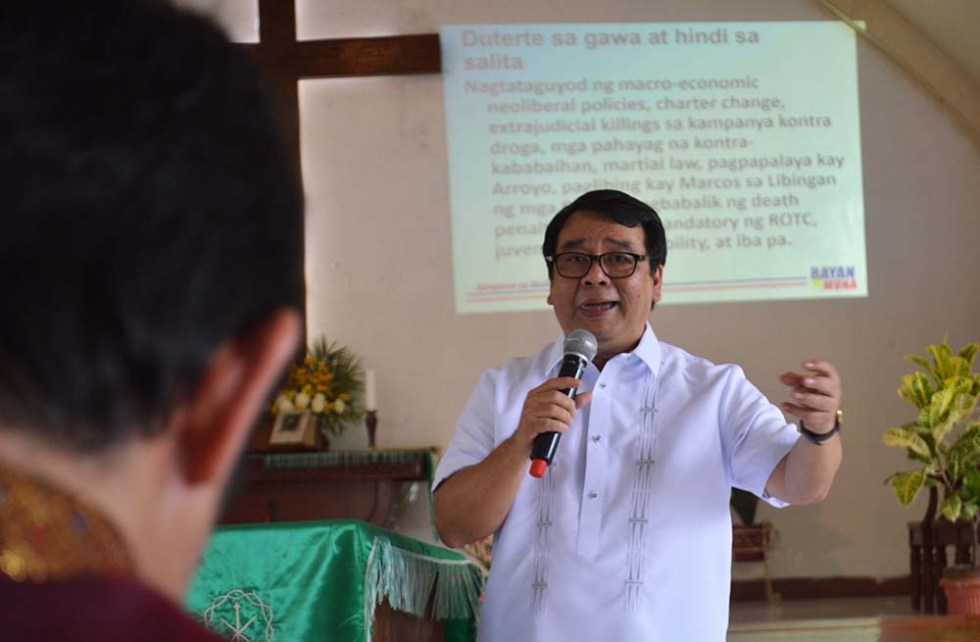 Neri Colmenares, chairman of Makabayan Coalition, says President Rodrigo Duterte’s war on drugs violates the right to due process. In this photo, Colmenares delivers his keynote speech during the launching of the Movement Against Tyranny on Monday, September 18 at the Davao Central United Methodist Learning Center. (Medel V. Hernani/davaotoday.com)

“Martial Law will not solve the problem of the Filipinos, it will only exacerbate the problems,” said Makabayan Coalition Chair Neri Colmenares on Monday, September 18.

Colmenares was among the personalities who attended the launching of the Movement Against Tyranny (MAT) here.

In an interview with Davao Today, Colmenares said Duterte’s attitude can be compared to that of the late dictator President Ferdinand Marcos who imposed Martial Law in 1972.

But he said Duterte “seems like he wants everyone, the Supreme Court, the Ombudsman, Congress, Commission on Human Rights, church, media, to agree to him.”

Three days before the 45th anniversary of Martial Law, human rights activists and Martial Law survivors here launched a movement to campaign against the “militarist rule” of the Duterte administration.

During the gathering held at the Davao United Methodist Learning Center, Bishop Jonathan Casimina, lead convener of the Southern Mindanao chapter of the MAT said they saw the need for the people to voice out their concern on the increasing cases of extrajudicial killings, Martial Law in Mindanao, and the war on drugs.

Launched in Quezon City last August 28, the alliance aims to “resist the continuing attempts to undermine, pressure or otherwise render ineffective the courts, Congress, the Office of the Ombudsman, the Commission on Human Rights, the working press, the political opposition and ordinary citizens critical of government policies and programs.”

This comes after President Rodrigo Duterte’s criticisms against the Ombudsman, CHR and the Supreme Court.

Casimina, a bishop of the Philippine Episcopal Church, said Martial Law in Mindanao “has generated thousands of victims of forcible displacements especially from war-torn Marawi City and nearby Lanao del Sur areas.”

He also noted the rise of forced evacuation cases outside Lanao del Sur province due to intensified military operations.

“We appeal to President Duterte to heed the call of freedom and peace-loving Mindanaoans to end Martial Law in Mindanao and prevent him from declaring it nationwide,” Casimina said.

Davao City was the second stop of the formation outside Metro Manila after Iloilo City.

Colmenares said encouraging Davaoeños to join in activities criticizing Duterte will not be easy.

He said he hopes the residents in Duterte’s bailiwick where he served as a mayor for more than two decades will be able to discern the issues.

“We need to be patient and look at the issue as an issue. We should look at Duterte not as a mayor of Davao City but as President of the Philippines,” he said.

The MAT in Davao City will join the nationwide protest set on September 21. (davaotoday.com)