Comelec, DepEd patch up over “offensive” comment vs. teachers 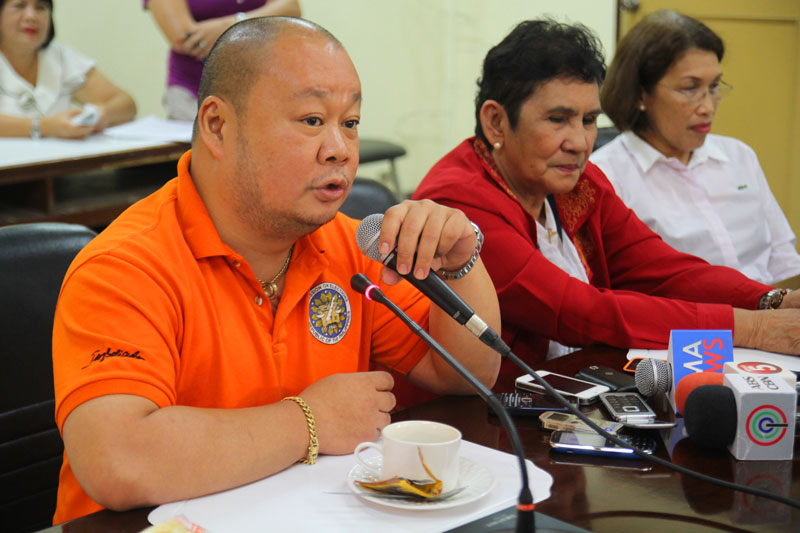 Comelec-XI Director Wilfred Jay Balisado apologizes for lawyer Aimee Ferolino-Ampoloquio’s behalf Thursday in Davao City, saying the statement she made against the teachers was unfortunate “and we are sorry for that.” (davaotoday.com photo by Ace R. Morandante)

DAVAO CITY, Philippines — Beleaguered Commission on Elections (Comelec) first district official lawyer Aimee Ferolino-Ampoloquio did not apologize and instead walked out after attending for about 20 minutes a closed-door meeting of Comelec and Department of Education (DepEd) officials Thursday.

Her boss, lawyer Wilfred Jay Balisado, Comelec-XI Director, apologized on her behalf for the statements she earlier issued that offended teachers whom she branded as “either forgetful or plain stupid” Board of Election Inspectors (BEIs).

Balisado added that the DepEd assured them that such statement won’t affect the departments’ partnership for the elections.  “We are steadfast in our commitment for clean and honest elections,” he said.

Helen Paguican of the Schools Division Superintendent said, “Let it not dampen our spirits.”

“Medyo na surprise mi, pero we’re still trying to resolve the issue so that the relationship of DepEd and Comelec will not be in the brink of despair.  Na-shock lang ta sa kapaspas sa turn of events,” said Dodong Atillo, DepEd-XI spokesman, immediately after Amploquio’s walkout.

He told reporters they were pressing for a public apology from Ampoloquio because “sakit na kaayo ang among kasingkasing sa iyang giluwat nga pamahayag.”

When the controversial interview was played out during the meeting, Ampoloquio was said to have denied issuing the statement because it was “only spliced.”

Atillo said Ampoloquio made a sweeping statement, not only to the BEIs, but also to public and private school teachers, who thought the statement was “below the belt.”

“I told her that whether it was spliced or not, interview or not, the point is, the statement has hurt us.  We wanted somehow that our feelings be appeased by a public apology,” Atillo said.

“Maybe the situation here was beyond for her to contain.  She wanted for the entire audio to be played,” Balisado said.

The “conciliatory conference,” according to Nenita Lumaad, DepEd-XI assistant director, was held to resolve the issue concerning Ampoloquio and her statement which earned the ire of public and private school teachers, retired or still in service, not just in Davao City.

The statement, according to Alliance of Concerned Teachers Party-list’s Prof. Mae Fe Ancheta-Templa, was an assault to the educators’ person and capacity.

“The (Comelec) Regional Director has apologized for Ampoloquio, we can accept that,” Paquigan said, as she appealed to put the issue to end to prevent any negative impact on the persons involved, and the credibility of the elections.

However, she noted they will still file a narrative report on this matter to their central office, and that the issue will be tackled or resolved in the respective offices involved.

Balisado, meanwhile, said there’s no official sanction to Ampoloquio, but she should explain or give her side once a complaint is filed at her, by the DepEd for example.

Lumaad said the lapses of BEIs, although no complaints were filed to them by Ampoloquio, are not intentional and doesn’t mean to sabotage the election.  “It might be na nagkamali lang.  But we can easily correct that if there’s also a guidance of the technician and the election officer,” she said.

She also reminded the Comelec that its officials and the technicians should be in the polling centers to guide the BEIs; and that their presence should not be arbitrary.

“We’re only trained for two days.  And if there are lapses na na-observe, dapat i-correct doon.  It doesn’t call for statements that are hurting and too personal,” she said.

Atillo said despite what happened, the DepEd, BEIs and teachers are still in full support of the Comelec’s electoral activity

“Ang among ika-assure sa public, ang BEIs will be in the precincts where they are assigned and perform their tasks on election day and even after the election day.  We will not soften on our responsibilities; we’ll continue to do what we’re supposed to do by the oath we have sworn,” he said.

Should Ampoloquio not issue a public apology, Atillo said they have plans but has not made it public.  “Definitely, this will not end on or after the elections.”  (Marilou Aguirre-Tuburan/davaotoday.com)