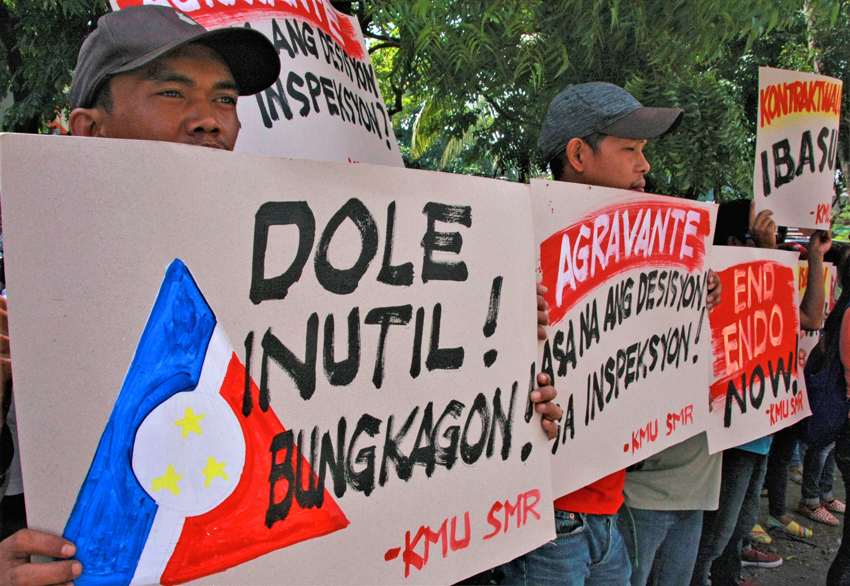 Workers stage a piket rally in front of the regional office of the Department of Labor and Employment region XI denouncing the Duterte administration’s failure to fulfill its promise to end labor-only contracting in the country. (Kath M. Cortez/davaotoday.com)

DAVAO CITY, Philippines — Workers led by Kilusang Mayo Uno Southern Mindanao (KMU-SMR) kicked off the pre-SONA (State of the Nation Address) protests saying that workers rights and welfare has never been a priority of the current administration.

On Monday, the workers aired their calls and dismay in front of the Department of Labor and Employment over the lack of action on the issues of ending contractualizaton, security of tenure as well as several cases of alleged harassment of unions and associations of workers in the region.

In an interview, KMU spokesperson Romelito Pablo said the workers’ situation in the region has not changed significantly under the Duterte administration. He said that despite the pronouncement of President Rodrigo Duterte to end contractualization, here in Southern Mindanao majority of workers are contractual.

“No promises have been delivered even if the list naming companies practicing massive contractualization has been released to the public,” said Pablo.

The KMU also demanded the findings and results of the inspection conducted by DOLE on companies and industries in the region practicing contractualization. The inspection was brought about by the complaints filed by different workers unions and associations affiliated with KMU.

Sustines Bantayan, chairperson of Kilusang Manggagawa sa Coca-cola-Kilusang Mayo Uno (KIMACO-KMU) said that majority of workers in Davao region have no security and safety in their work.

Workers are being hired under agencies as service providers to companies and industries without proper benefits, low wage earnings and security of tenure.

“Most of us worry about our situation. We don’t know when our contracts would be terminated. That’s why we are asking the DOLE to act on this matter urgently,” said Bantayan.

Meriam Roda, a banana plantation worker under PH 84 NAH management under Dana Company, said in their company a lot of workers have been working for more than five years yet they remained contractual.

Roda has worked for Dana Company for six years but remained a contractual worker.

She said that up until now no result has been presented to them by the DOLE officials after an inspection was conducted last year.

Bantayan cited Coca-cola workers have been working more than eight hours but did not receive an overtime pay and other benefits.

In many banana plantations in Compostela Valley, workers who are members of KMU have been forced by the military to ‘clear their names or surrender.’

President of Nagkahiusang Mamumuo sa Suyafa Farms (NAMASUFA) John Paul Dizon said that their members who worked at the Sumifru fruits Philippines were summoned to the barangay by the 66th Infantry Battalion of the Philippine Army last March 15 and were accused of being connected to the New People’s Army (NPA).

Dizon said workers and union members are being threatened by soldiers.

The soldiers, said Dizon, are doing house to house visits tagging them as members or supporters of NPA.

The workers have asserted that they belong to a legitimate workers union.

In its monitoring, KMU-SMR said that almost 1,500 workers in Compostela Valley were forced to “clear their names” for being accused as NPA supporters.

Pablo said that the attacks on union members intensified in the region since last year despite their assertion that these unions are legal and legitimate. (davaotoday.com)