Duterte yet to issue formal document terminating talks with communists 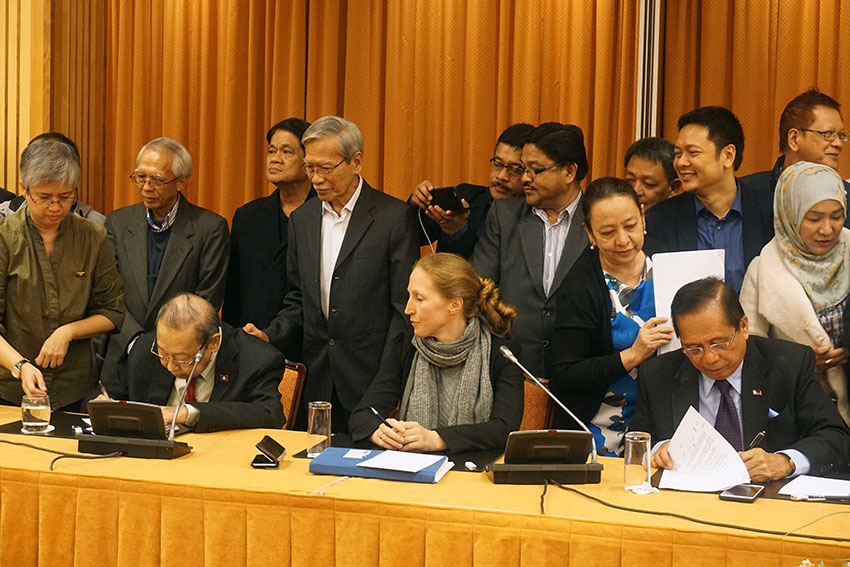 The peace panels of the government and the National Democratic Front of the Philippines sign an agreement to forge an interim joint ceasefire during the fourth round of talks in Noordwijk, The Netherlands on April 5, 2017. (Zea Io Ming C. Capistrano/davaotoday.com)

DAVAO CITY, Philippines — Two weeks since President Rodrigo Duterte announced he does not want to talk to the
communists anymore the National Democratic Front of the Philippines said ​it ha​s not yet received a formal notice from the Philippine government.

NDFP peace panel chairperson Fidel Agcaoili said they have not yet received any formal notice to terminate the talks​. President Duterte ​said he ​wa​s terminating the peace talks ​after communist​ guerrillas continued to attack​ government soldiers and a convoy ​of his Presidential Security Group.

He said: “There can be informal talks or backchannel talks or touching base between members of the two Panels even while the the 5th round of formal talks remains cancelled. Such would mean that the peace negotiations are still on.”

Agcaoili said to end the talks, a written formal notice of termination must be sent by the party concerned to the other party.

Agcaoili said the method of terminating the peace negotiations is detailed in the Joint Agreement on Safety and Immunity Guarantees signed by the parties on February 24, 1995.

JASIG provides safety and immunity guarantees to protect the rights of the negotiators and consultants, including staff and other personnel who participate in the negotiations.

“Immunity guarantees shall mean that all duly accredited persons are guaranteed immunity from surveillance, harassment, search, arrest, detention, prosecution and interrogation or any other similar punitive actions due to any involvement or participation in the peace negotiations. The immunity guarantees shall cover all acts and utterances made in the course of and pursuant to the purposes of the peace negotiations,” the JASIG reads.

According to its general provisions the JASIG may be terminated “by written notice given by one party to the other. In this latter event, this Joint Agreement shall be deemed terminated 30 days after receipt of the notice of termination.”

It can be recalled that the fifth round of talks last May was cancelled after the government refused to participate in the talks scheduled in the Netherlands due to “lack of enabling environment.”

The JASIG became binding on the two Parties after its approval by the principals of the parties: NDFP chairperson Mariano Orosa on April 10, 1995 and former President Fidel Ramos on April 25, 1995.

During a media interview at the sidelines of the 113th founding anniversary of the Bureau of Internal Revenue in Quezon City, Duterte was asked by a reporter if the government has already submitted formal documents for the termination of the talks. The President replied: “Meron pa ba ibang protocol diyan? (Is there any other protocol there?)”

“I said I don’t want it anymore. So is there any other protocol that I have to comply before it becomes final?” Duterte added.

The chief executive them said he will sign a formal notice of termination to finally end the talks which he said is a “waste of time.”

“Give me a piece of paper. I will write it for you. Give it to them… What do you intend to accomplish? It only ends up at name-calling pati shouting. Don’t waste my time, I have so many things to do,” Duterte said. told reporters on Wednesday at the Bureau of Internal Revenue anniversary in Quezon City.

Both the government and the National Democratic Front were slated to hold a backchannel talks last July for this month’s supposed peace negotiations.

However, the supposed backchannel talks were cancelled due to the ambush of a convoy of Presidential Security Group in Cotabato province including as well the series of skirmishes between the New People’s Army and the government troops in Mindanao and elsewhere in the country.

On July 20, President Duterte announced he is not talking to the communists anymore a day after an encounter between the Presidential Security Group and the NPAs who put up a checkpoint in Arakan, North Cotabato.

Duterte also hit out the communist rebels for conducting offensive attacks against the state security forces despite the ongoing peace talks.

Duterte said after the government’s operation against the Maute group and the Abu Sayyaf Group in Marawi City, they will shift the offensives to target the New People’s Army who wages the longest running Maoist insurgency in Asia.

Meanwhile, government chief negotiator Silvestre Bello III said that the panel was waiting for the final instruction from the President as to whether or not terminate the peace talks with the communist rebels.

“We are still waiting for the final instruction (from Duterte). To terminate the talks, we have to write them and inform them that we are terminating,” Bello told Inquirer in a chance interview in Malacañang.

“It will take effect 30 days after the receipt of the letter. Kami ang gagawa (We will write the letter) upon the instruction of the President. If he said we send a formal termination, then we would do that,” he added. (With reports from Mart D. Sambalud/davaotoday.com)