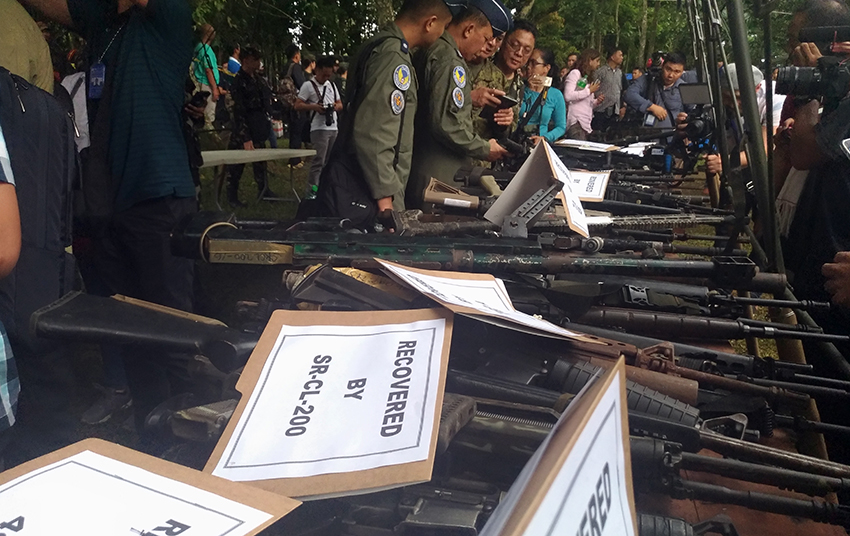 ENEMY FIREARMS. Dozens of high-powered firearms are recovered by government troops from the Maute group in Marawi City. The firearms are supposed to be presented to President Rodrigo Duterte during his scheduled visit at the 103rd Infantry Brigade in Marawi. However, Duterte’s trip was cancelled due to “bad weather.” In photo (L-R): Presidential Peace Adviser Jesus Dureza and National Security Adviser Hermogenes Esperon.(Zea Io Ming C. Capistrano/davaotoday.com)

Duterte was scheduled to meet military officials at 1:30 pm inside the 103rd Infantry Brigade at Camp Ranao. The Army officials were supposed to present to him dozens of recovered firearms from the Maute group and to talk to government troops who were already positioned at the grounds.

Defense Chief Delfin Lorenzana together with National Security Adviser Hermogenes Esperon and Presidential Peace Adviser Jesus Dureza arrived at the military camp a few minutes after the representatives of the Media Accreditation and Relations Office told the media that Duterte’s trip has been cancelled.

Lorenzana later addressed the troops and the media that Duterte did not proceed with the trip due to “bad weather.”

“The President is not continuing the visit here. I think he will go as far as Cagayan De Oro City and visit some of our troops who are wounded,” he said.

His visit to Camp Ranao was supposed to be his fifth visit to military camps in this month alone since he declared Martial Law in Mindanao on May 23.

Duterte has been talking to government forces in military camps assuring government troops of support for their fight against terrorism.

He also visited troopers of the 602nd Infantry Brigade at Camp Robert Edward Lucero in Carmen, North Cotabato on June 6, 2017.

On Sunday, June 4 Duterte visited the Brigadier General Benito Ebuen Air Base in Lapu-Lapu City, Cebu to honor the soldiers and policemen who took part in the operations against the Abu Sayyaf Group in Bohol.

The President also spoke before government forces of the 102nd Infantry Brigade in Ipil, Zamboanga Sibugay on June 2. (davaotoday.com)