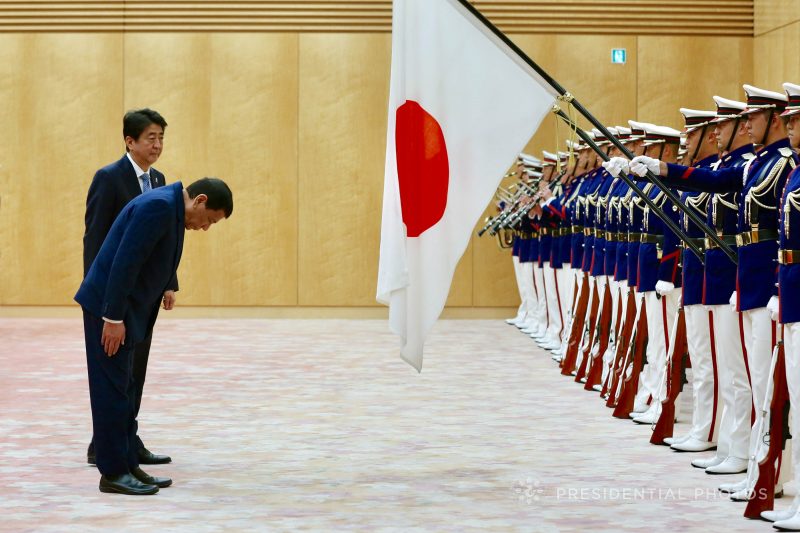 President Rodrigo Duterte shows a gesture of respect to the honor guards upon his arrival at the Prime Minister’s Office in Tokyo on Monday, October 30. Duterte is accompanied by Japan Prime Minister Shinzo Abe. RICHARD MADELO/PRESIDENTIAL PHOTO

Upon his arrival at the Francisco Bangoy International Airport here on Tuesday night, October 31 Duterte described his visit to Tokyo as the “most productive and engaging” because was able to clinch $9 billion (estimate of P464 billion) pledge of assistance and a fresh investments worth $6 billion (estimate of P309 billion). He described it as having “huge impact” projects for the country’s economic and infrastructure programs.

“Prime Minister (Shinzo) Abe committed to give flesh to Japan’s special assistance program. I am committed to work closely with him to ensure that projects proceed [the] soonest and it will be done, done, done,” Duterte said.

The amount, Duterte said, is “more than three times” of what was during his first visit to Japan last year.

Duterte said the Japanese corporations are “in a hurry as we are.”

“They want to finish during my term,” he said.

“If it’s delayed, you know, how the imponderables of this planet evolve, then… pero huwag lang sana tayong maabutan ng gulo (let’s hope that trouble will  not come ahead of us),” he said.

Duterte was apparently referring to the trouble brewing in the Korean Peninsula due to the threat of North Korea’s missile tests. He said this may affect the plans of the two nations.

However, the President did not mention whether the projects signed will be through loan or grant but he said “what is important is what moves this nation.”

“It’s either grant, it’s a loan or whatever,” he said, adding that the government “can always ask” for a longer payment  period. “It’s almost a lifetime. I’m sure the next generation can do it,” he said.

The Philippines target to spend P8 trillion to P9 trillion for infrastructure projects from 2017 to 2022 in a bid to accelerate infrastructure and development  industries to create jobs.

Under his 10-point Socioeconomic Agenda, Duterte plans to reduce poverty to  13 to 15  percent by the end of his term from 21.6 percent in 2015.(davaotoday.com)