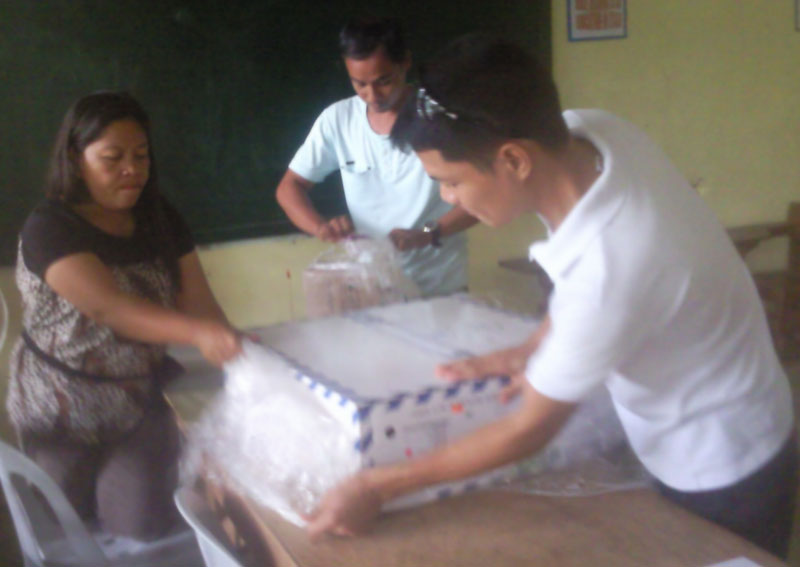 Board of Election Inspectors seal the ballot box Monday during the Final Testing and Sealing in one of the clustered precincts in Sto. Tomas town, Davao del Norte. (davaotoday.com photo by Mart D. Sambalud)

Esther Sison, Election Officer III of Comelec-Sto. Tomas, said there was no reported hardware problem on ballot-counting machines and no PCOS machines have malfunctioned.

However, Dennis Miranda, 30, a registered voter in Cluster I precinct in Sto. Tomas Central Elementary School complained that the FTS started late at around 10:35 in the morning.  He cited there was no specific time announced.

Sheryl Abastillas, a public school teacher who served as the Chairman of the Board of Election Inspectors (BEI) in Cluster I precinct reasoned out that “an initial procedure shouldn’t be rushed to avoid possible problem,” adding that its part of  the whole process.

In the morning, BEIs performed a random inspection of the precinct room and conducted an initial audit procedure that includes checking the hardware configuration of the ballot-counting machines—recording its serial number, Compact Flash Card and the like.

Ten voters were randomly chosen and casted their votes using the ballots.  Afterwhich, ballots were fed and accepted by the PCOS machine.

There were eight copies of election returns printed.  The BEI then retrieved the ballots casted and performed a manual tally of the votes.

The BEI has sealed the card slots where the main and back-up memory cards are inserted.  The PCOS box was sealed also in front of the voters and poll watchers. The whole PCOS FTS took 45 minutes to finish.

Esther Sison, Election Officer III of Comelec-Sto. Tomas, said there was no reported hardware problem on ballot-counting machines and no PCOS machines have malfunctioned.

As of 5 PM, the BEIs submitted essential documents to the Comelec municipal office which includes the printed copies of election returns, the recorded minutes on the conduct of FTS and the monitoring report, among others.

“We are happy because the conduct of the final testing and sealing of PCOS went smoothly and it was a success,” she said.  (Mart D. Sambalud/davaotoday.com)