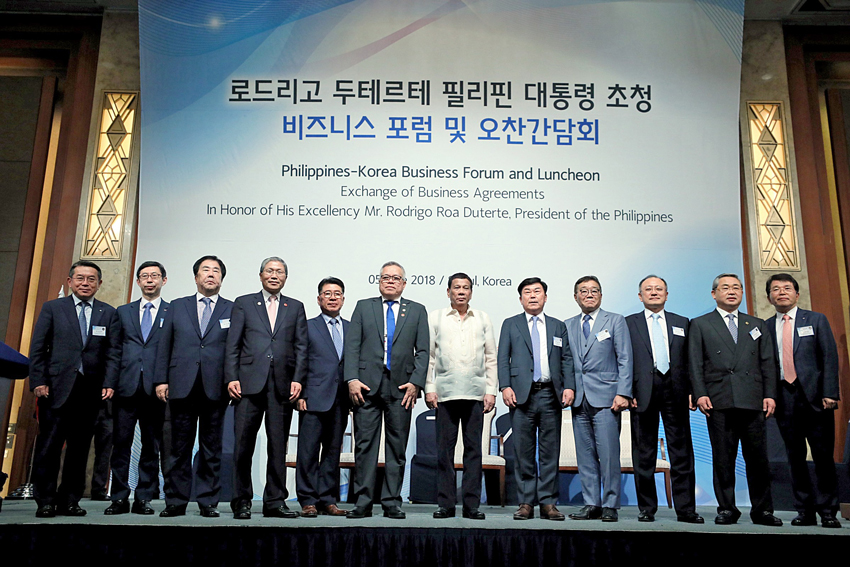 President Rodrigo Duterte and Trade and Industry Secretary Ramon Lopez pose for a photo with the officials from various Korean companies following the exchange of signed business agreements during the Philippines-Korea Business Forum and Luncheon at the Lotte Hotel in Seoul, Republic of Korea on June 5, 2018. (Malacañang photo)

DAVAO CITY, Philippines — For Kilusang Magbubukid ng Pilipinas chair Danilo Ramos, the President and the head of the Department of Agriculture (DA) “got some explaining to do” as to the extent of agricultural lands being compromised in foreign agri-business deals signed in recent state visits.

The group asserted that the government, particularly the DA must reveal the details of all the agriculture and agribusiness deals forged by President Rodrigo Duterte and Secretary Manny Piñol during their trips abroad.

“Duterte is prancing around the world, closing agribusiness deals with corporations at whose stake? For all we know, he could be authorizing land lease deals to foreign companies and allowing the massive expansion of foreign plantations at the same time while landless Filipino farmers are fighting to have control of the land they till,” the KMP leader added.

The President and a number of his cabinet secretaries, including Piñol were recently in South Korea for a three-day state visit.

The deals are mostly purchasing deals and agreements that will allow for the expansion of corporate plantations for export, the group added.

They described these deals, including the recent P28-billion agreements signed in South Korea as “pimping of local agriculture.”

“These deals that Duterte signed with foreign countries range from one, three, to five years. We need to know the full details and implications of these deals as it could affect the state of local agriculture, our farmers and our own food security,” the group pointed out.

The group also provided the media with the following data showing the deals related to agriculture that was signed by the Philippines with other countries: 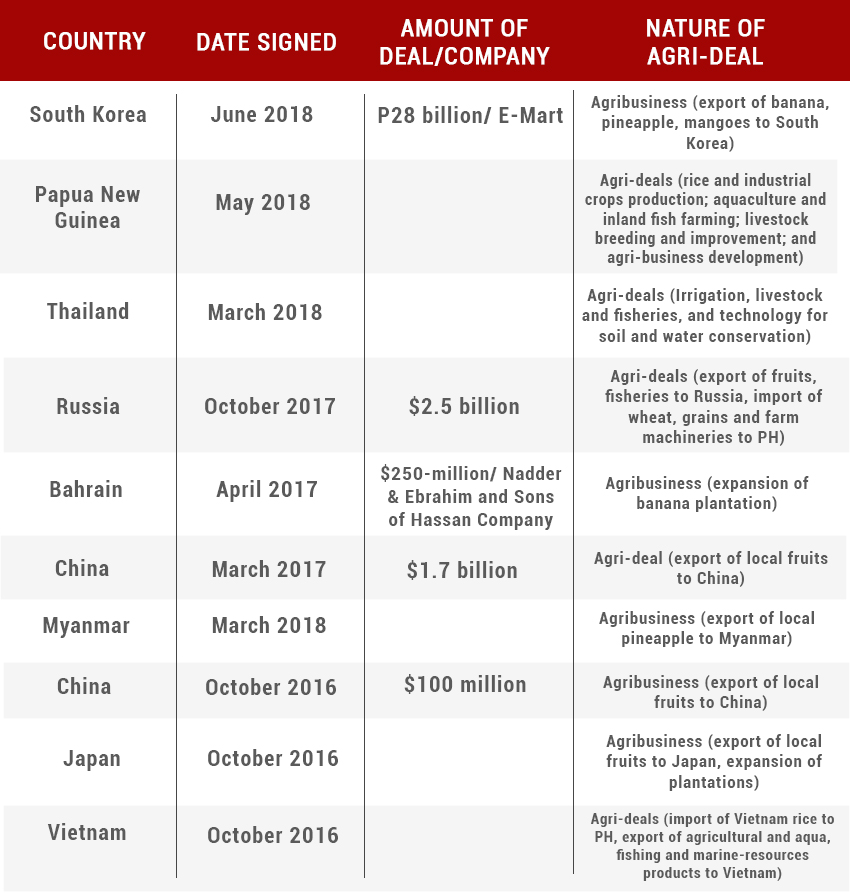 “In March this year, the DA signed a rice-planting deal with Papua New Guinea that is a government-to-government agreement to produce a target rice production output of 8-million metric tons on an area of about one million hectares within five years,” KMP said.

The output, the group added, will be sold to meet Papua New Guinea’s domestic rice demand and will be purchased by the National Food Authority (NFA).

KMP also asked the Senate and the Lower House to probe Duterte’s agribusiness deals and how such transactions would affect the situation of farmers and the country’s food security.

“There’s no real independence as long as PH doesn’t have economic sovereignty and our economy is tied to foreign economies, particularly to the economy of the United States and China,” the group averred. (davaotoday.com)