DAVAO CITY, Philippines – Activists in Davao City staged a protest rally calling for President Rodrigo Duterte’s ouster in time for his fourth State of the Nation Address on Monday, saying he failed to deliver his promises.

“Duterte for three years neglected us workers and the people whom he promised better living,” Olalo said.

“Duterte betrayed us, he promised us an independent foreign policy but what he did in the past three years is a total sell-out of our country’s patrimony and sovereignty to China while he continues to be a puppet of the US,” Olalo added.

Meanwhile, Jong Monzon of Pasaka said the Duterte administration also failed the indigenous peoples of Mindanao, especially those who forcibly evacuated from their communities due to incessant militarization.

“Duterte turned a blind eye to the Lumad evacuees, when he ordered the bombing of IP schools in his previous SONA. He then declared martial law in Mindanao which exacerbated the militarization of our communities and now this government wants to close Lumad schools by ordering the Department of Education to deny the school’s permit to operate,” Monzon said.

Monzon gave President Duterte a “negative grade” for his failure to deliver on his promise to help the Lumad evacuees return safely to their homes.

“We don’t expect anymore from him. It is clear that three more years in office will only result to more poverty and human rights violations. The indigenous people, along with the broad unity of disgruntled Flipino people, will work hard to oust him from the palace,” Monzon added.

About 500 activists from different parts of Southern Mindanao region converged at the Freedom Park along Roxas Avenue here for a protest rally on Monday morning.

Here are some photos during the protest in President Duterte’s hometown as he is about to deliver his fourth SONA: 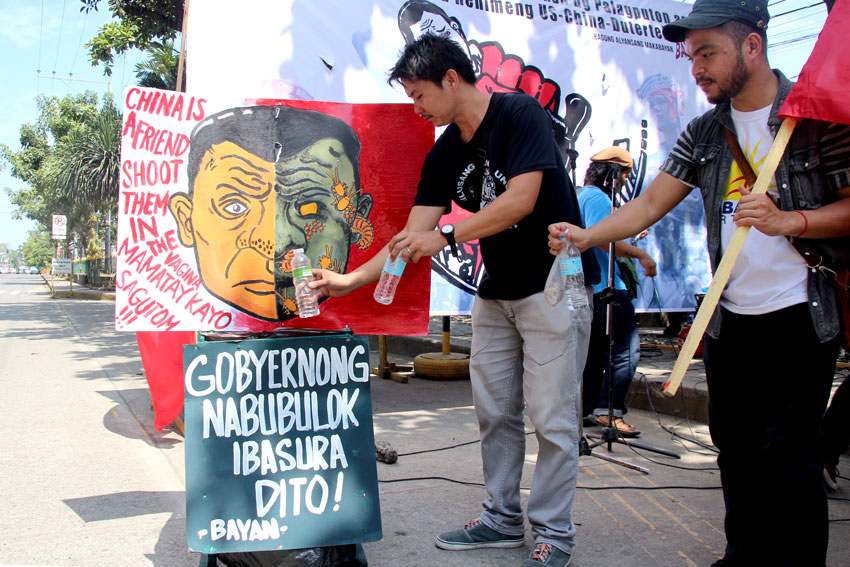 ‘DU-DIRTY BIN’. Protesters clean up their picket line and throw litter in a waste bin with an image of President Rodrigo Duterte covered in parasites, depicting the “rotten Duterte administration” after holding a protest at the Freedom Park in Davao City in time for the President’s fourth State of the Nation Address on Monday, July 22, 2019. (Ken E. Cagula/davaotoday.com) MOTHER’S LAMENT. Lorena Mandacawan, member of the Parents -Teachers and Community Association (PTCA) of the Salugpungan schools, urges President Duterte to respect the indigenous peoples’ right to education. Mandacawan cried foul over the suspension order issued by the Department of Education against the Salugpongan schools where her children are currently studying. (Mara S. Genotiva/davaotoday.com) 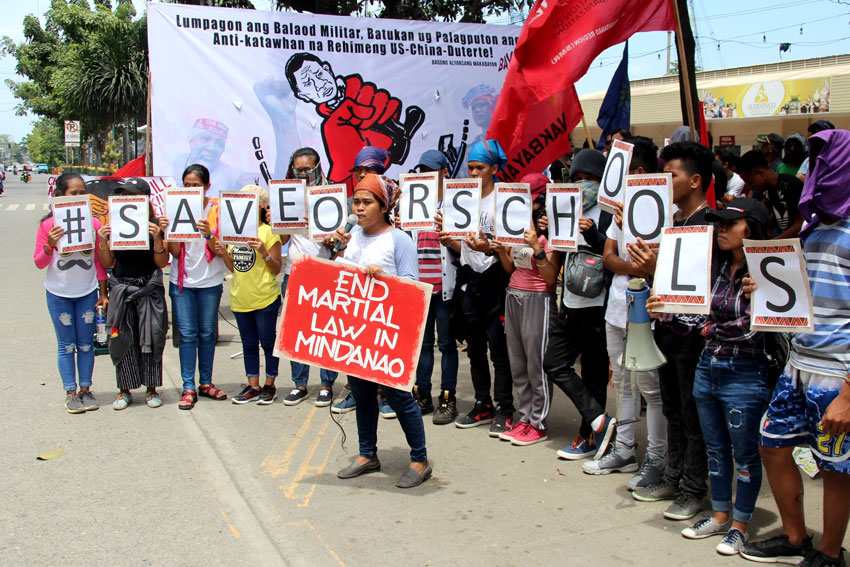 ‘SAVE OUR SCHOOLS’. Lumad students join the protest to lament the possible closure of their school following the Department of Education (DepEd) Region 11 order suspending the permit to operate of 55 Salugpongan schools catering to Lumads across the Davao region. (Mara S. Genotiva/davaotoday.com) 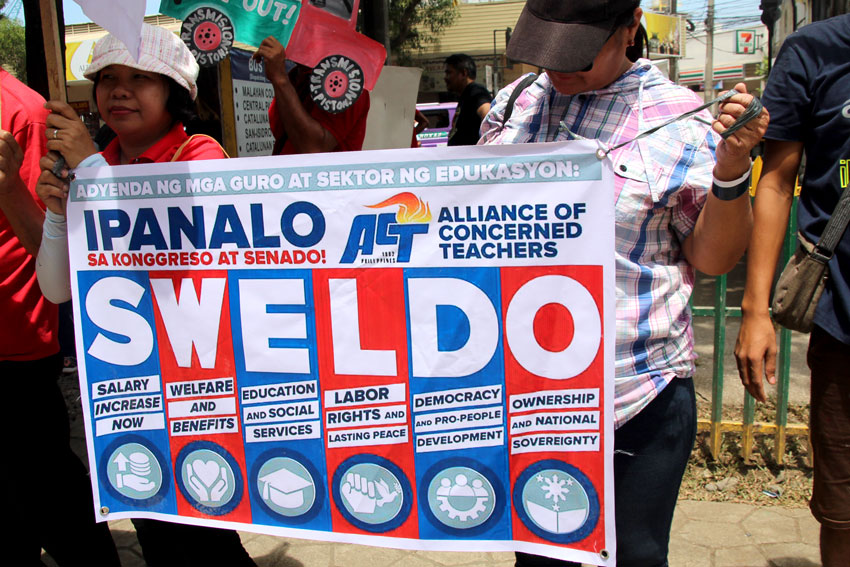 PAY HIKE. Members of the Alliance of Concerned Teachers (ACT) demand for substantial salary increase for teachers and government workers. ACT said President Duterte has yet to fulfill his promise of a pay hike for teachers. (Ken E. Cagula/davaotoday.com) LIVING WAGE. Workers led by Kilusang Mayo Uno join the protest rally to demand for the end of contractualization or labor-only contracting and to set the national minimum wage at P750 in the country. (Ken E. Cagula/davaotoday.com) ‘CHILDREN NOT CRIMINALS’. Members of various child rights group in Davao City call on the government to stop the proposed lowering of the minimum age of criminal responsibility from 15 years old to 12 years old. (Mara S. Genotiva/davaotoday.com) 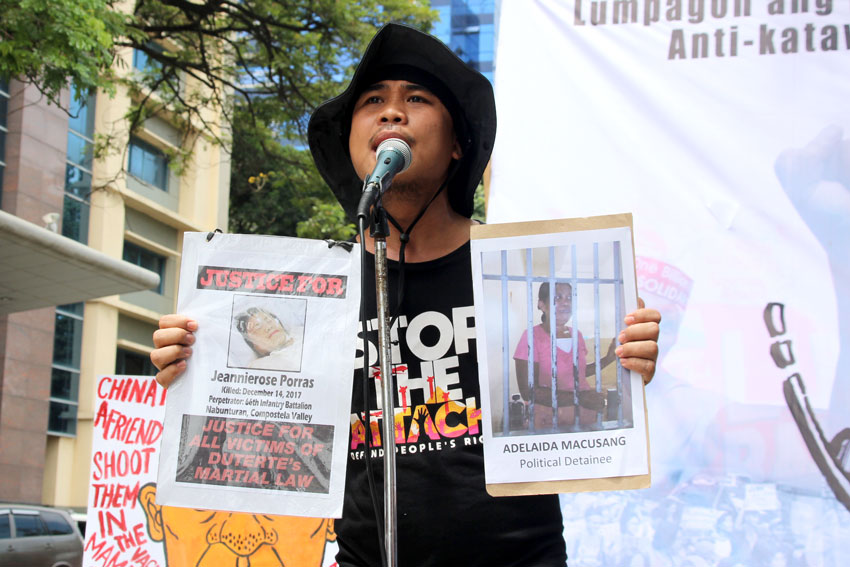 BLOODY RECORD. Jay Apiag, secretary general of Karapatan, hits the Duterte administration for having a “bloody” record on human rights violations. Karapatan has recorded 96 cases of political killlings in Southern Mindanao region alone since 2016, 66 cases were documented during the implementation of martial law in Mindanao. (Mara S. Genotiva/davaotoday.com)