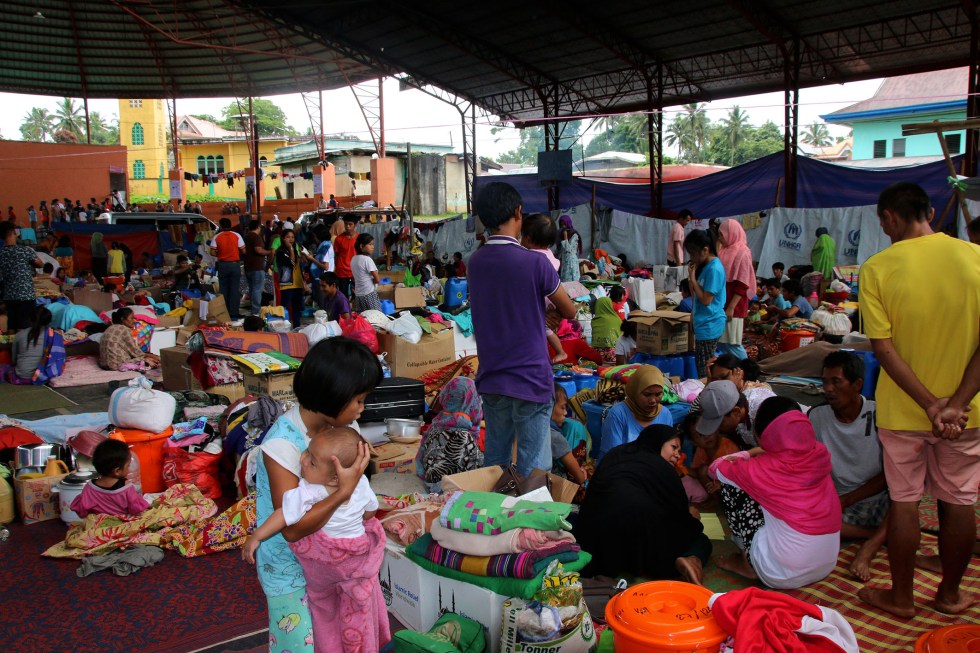 ILIGAN CITY, Philippines – A looming humanitarian crisis is feared as the air and ground military offensives by the Armed Forces of the Philippines (AFP) against the ISIS-linked Maute Group and Abu Sayyaf continue in Marawi.

The continued military offensives continue to displaced families and individuals continue to shelter temporarily in registered and unregistered evacuation centers.

Leaders and members to the three-day National Interfaith Humanitarian Mission presented the findings of their mission in a press conference at the MSU-IIT here on Friday, June 16.

The mission that ran from June 13 to 15 visited the displaced families and individuals in Iligan City and in the towns of Lanao del Sur and Lanao del Norte.

“We see the looming humanitarian crisis as the military operations continue in Marawi while the government failed to adequately respond to the needs of the displaced persons,” said Teddy Casiño of Alyansang Makabayan who presented the summary of the findings.

He said that the mission also found out the overwhelming sentiments of displaced families and individuals against aerial bombings in Marawi and the declaration of martial law.

Activities in the evacuation sites include health services, documentation of human rights abuses and psycho-social sessions for children and women. 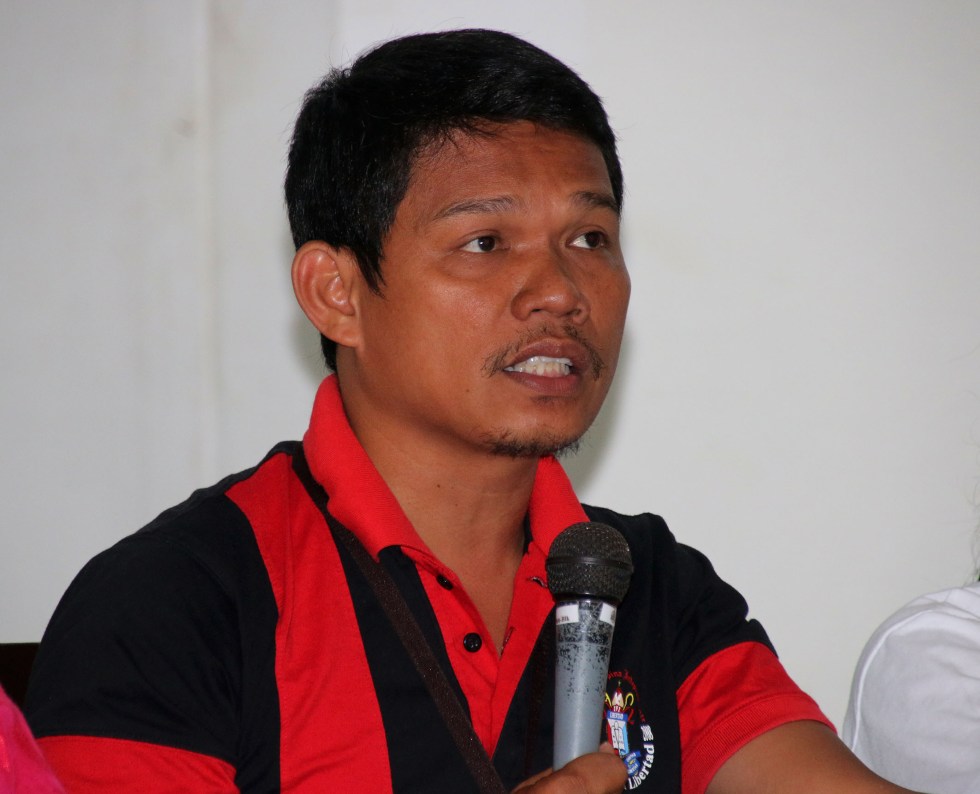 HR SITUATION. Fr, Christopher Ablon, secretary-general of Karapatan in Northern Mindanao presents​ the result of the investigation on the human rights situation of the evacuees from Marawi​. ​(Alex D. Lopez/davaotoday.com)

In his report during the press conference, Fr. Christopher Ablon, secretary-general of human rights group Karapatan in Northern Mindanao said the majority of the violations they documented during the mission include aerial bombardments, massive forcible evacuations, encampment, destruction, and divestment of properties.

The cases were reported by residents from Marawi who are now staying in evacuation centers and to the families in nearby towns and provinces.

Ablon said that some Marawi residents testified that bombings in the city already started by the afternoon of May 23 and forced them to leave the area.

“As the firefight and bombings escalate in the following days, many residents have also decided to abandon their houses and seek refuge in evacuation centers and their relatives,” he added.

The report of the mission also took note of the destruction of structures and houses in Marawi due to the continued bombardments launched by the AFP.

“Some have seen their houses being bombed by fighter planes and some have seen photos of their destroyed houses in social media and other online news,” Ablon said.

He also told of the account of residents seeing their properties such motorcycles, bed frames and refrigerators inside military trucks.

“Other personal effects such as pieces of jewelry and cash discovered missing after their houses were ransacked,” Ablon added.

The mission also documented of local residents, especially men who were wearing black being tagged as terrorists and members of Maute Group while soldiers were also found camping inside houses and mosques.

“On June 5, three stray bullets hit the walls of Bubong evacuation center in Barangay Bubong where almost 300 families have evacuated,” he said.

The mission also asked the evacuees on their views on martial law and its effects to their situation while forced to shelter in evacuation centers, including the bombardments that the AFP staged in Marawi.

Evacuees who responded to interviews told of the ruins in Marawi, especially the buildings and houses brought about by massive airstrikes and bombardments.

“Many have lost their properties and livelihoods. Among those that were also affected are individuals that do not reside in Marawi but were working there. Since martial law broke, they have since been unemployed,” Ablon said in the report. 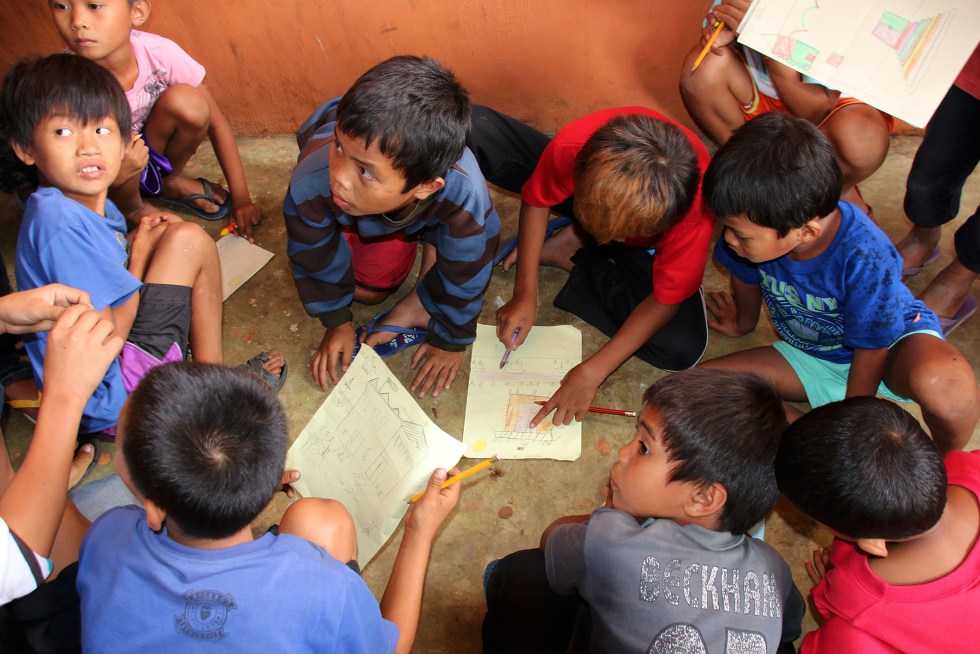 IN SESSION. Children inside the evacuation center in Saguiran join a psycho-social activity t​o cushion the impact of trauma during Marawi siege. (Alex D. Lopez/davaotoday.com)

The report added: “Overwhelming majority of the respondents interviewed expressed that they did not agree to the imposition of martial law in Marawi and the aerial bombardments conducted by the AFP. Some said that authorities could have pursued the Maute Group without declaring martial law. More so, the bombings are unwarranted and had practically wrecked Marawi.”

Residents also called for the end of bombardments and to stop the imposition of martial law, the report said.

They also wanted the government to start the reconstruction of Marawi and provide livelihood to the displaced residents, the report added.

Grace Celis of the Community Based Health Services also presented the findings of the health investigations conducted by the humanitarian mission and reported of the lamentable health conditions of displaced individuals, especially the women and children in the recognized and unrecognized evacuation centers.

The health team of the mission was composed of seven doctors, five nurses, one midwife, 10 health workers and more than 20 volunteers.

“Sanitation situation is reflected by the top 10 diseases and lack of potable water source and infrastructure that is not suitable,” Celis said.

She also took note of the lack of active health education while at the evacuation center, to include cleanliness campaign especially washing and absence of hygiene kit.

The doctors who volunteered during the mission also found the poor quality of health services in evacuation centers with no medicines available while health personnel is not pro-active in their services. 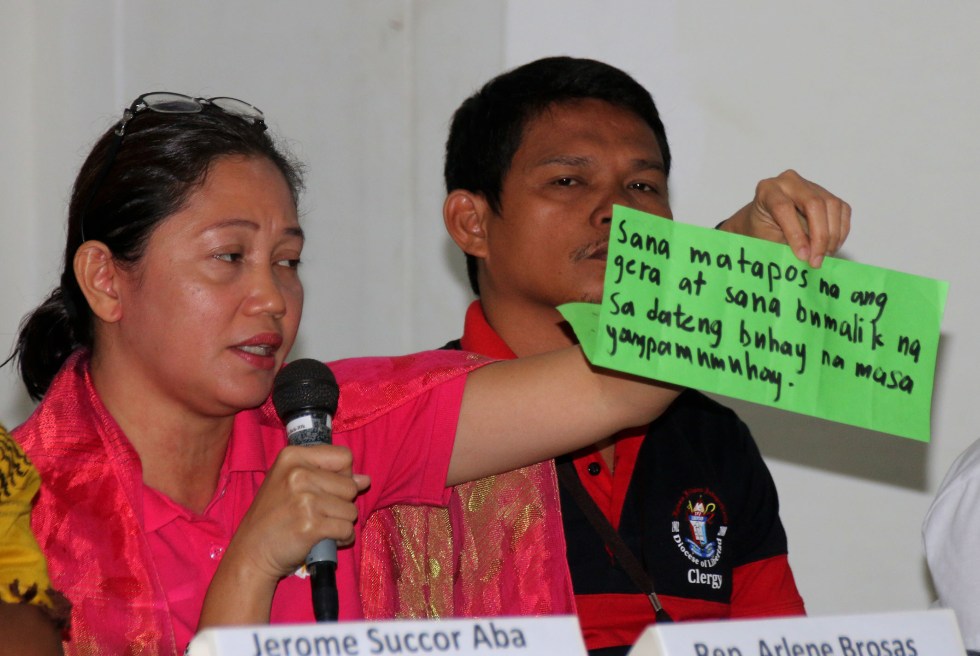 WAR AFFECTING CHILDREN. Gabriela Women’s party-list Representative Arlene Brosas shows​ the ​written wish of one of the children evacuees in Sagui​a​ran town. The child, she said, wishes for an end to the war and go back to their home in Marawi. (Alex D. Lopez/davaotoday.com)

Rep. Arlene Brosas of Gabriela Women’s party-list provided the report of the psycho-social interventions conducted by the mission to the children and women in evacuation centers.

Brosas said a total of 300 children with ages ranging from 2 to 16 years old in three evacuation centers were given psycho-social interventions by the mission within the period of two days.

“This is the first psycho-social intervention conducted in three evacuation centers three weeks since the Marawi siege broke out,” Brosas pointed out.

She said the activities provided the children in evacuation centers the venue to share and express their traumatic experiences and allow them to express their feelings and opinions on such experiences.

“We also assessed the impact of the airstrikes to the children and documented specific children’s rights violated,” she added.

The activities also determined the existing conditions of the children and identified their immediate needs.

Most of the children who joined the psycho-social sessions experienced trauma as a result of bombardments and on their experiences while leaving their abodes in Marawi.

Sleepwalking, the mission found out, were experienced by some children that manifest of their traumatic experiences because of war.

Through the activities, the children also expressed their longings while at the evacuation center.

Most of them wrote of the end to war so that they could go back to their homes and schools, the report added.

Women and mothers were also part of the psycho-social activities and were interviewed about their experiences during the siege.

Brosas highlighted the fear of women and mothers in evacuation center on the rape joke that President Rodrigo Duterte once said in public.

“Mothers who were interviewed at evacuation sites said they are always reminded of said joke and they now fear for the safety of their daughters from violence,” she said.

She also took note of the accounts of some residents of the strategies the military used to force families to leave Marawi, and that is to rape women who would refuse to evacuate.

Livelihood and sources of income of women and mothers were also lost due to the war in Marawi, the report added.

Some, Brosas added, are now apprehensive of what future await for them since they already lost everything in Marawi.

Brosas added that in a crisis situation, women become vulnerable to other forms of human rights abuses such as human trafficking, illegal recruitment, and sexual violence. 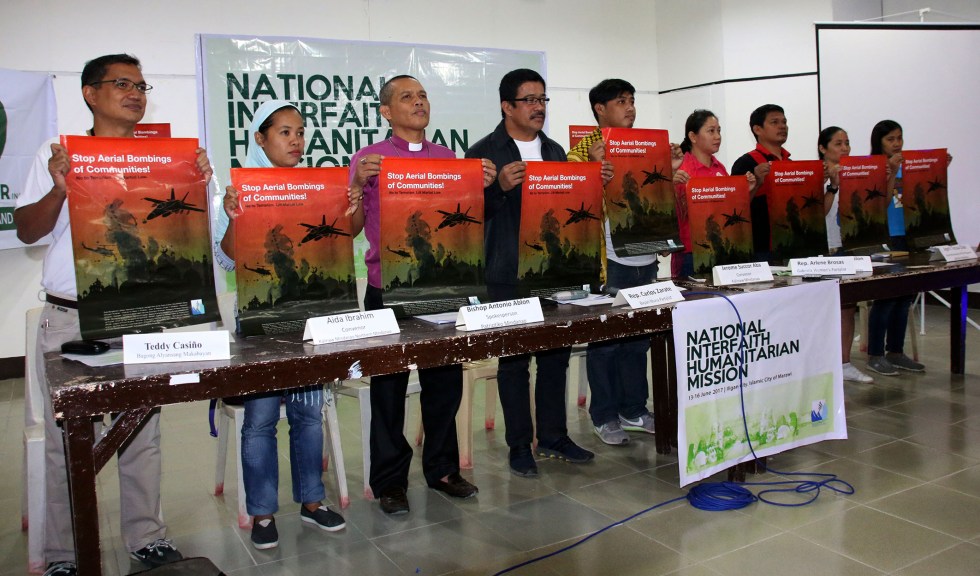 END AIR RAIDS. Leaders of the recently-concluded National Interfaith Humanitarian Mission call ​on an end ​to
airstrikes in Marawi after they presented the result of their mission in a press conference held at MSU-IIT in Iligan City on Friday, June 16. (Alex D. Lopez/davaotoday.com)

Based on their findings, the mission came out with calls to the government to help Marawi and its people rebuild their homes and communities.

The first recommendation if to generate more relief aids and other forms of assistance to the victims of Marawi siege and that the AFP should ensure that all help reaches the evacuees. Cruel, discriminatory and malicious efforts to prevent such aid from reaching its intended beneficiaries should not be tolerated, the group added.

Second, the mission called for the improvement of the facilities in the evacuation areas, and that both the national and local governments should respond swiftly to the needs of the evacuees, most of whom are suffering and desperate.

Thirdly is the formulation of a comprehensive rehabilitation plan that will provide sustainable livelihood and development opportunities for the people and eventually rebuild Marawi.

The mission, in its fourth call, urged the government to stop the aerial bombardment of Marawi and nearby areas and the lifting of the martial law as soon as possible.

They also asked the Congress to conduct a deep investigation and form an independent fact-finding body on the circumstances that led to the great humanitarian crisis in the Islamic City of Marawi.

The group said they will present their findings and recommendations to the concerned agencies and offices of the government.

The AFP through the Joint Task Force Marawi overseeing the whole operations in the area clarified that aside from military actions, they are also engaged in dialogues with the local government unit and other local leaders in preparation for rebuilding and rehabilitation phase of Marawi.

Lt. Col. Jo-Ar Herrera, spokesperson of JTF Marawi told reporters on Thursday that rebuilding and rehabilitation is one of the top priorities that will be undertaken in Marawi to allow civilians to go back to their homes and communities.

These must be observed, he added, during the conduct of military activities and clearing operations in Marawi.

Government forces also took part in the conduct of rescue of civilians trapped in the continuing firefight against the Maute Group.

As of 6:00 p.m. on Thursday, June 15, Herrera said 1,629 civilians were already rescued by government troopers with the support of the local government unit and civil society organizations.

He also told reporters on Thursday that all relief goods and aids are welcome.

He also clarified that relief goods and aids must be turned over to a command center in Iligan City that was set up three days after the Marawi siege.

The center, he added, facilitates the distribution of relief goods and aids to various evacuation centers in the area.

In their earlier statements, the AFP also denied the reported lootings perpetrated by their men.

The AFP cited the recovery of P52.2 million cash and P27 million worth of checks recovered by government forces during operations in Marawi that were properly turned over to proper authorities.

The turnover of the millions of cash and checks, the AFP said, disproved the accusations of troopers involved in looting, the AFP said.

The government, particularly the Autonomous Region in Muslim Mindanao also reported of its continuing relief operations to the evacuees in different evacuation centers.

The Humanitarian Emergency Action Response Team said 3,687 families or 17,647 individuals in evacuation centers and 47,677 families or 233,200 individuals considered as house-based evacuees were already served as of 5:00 p.m. on June 15.

As of the same date, a total of 5,284 individuals were already provided with medical services, the ARMM-HEART data added. (davaotoday.com)