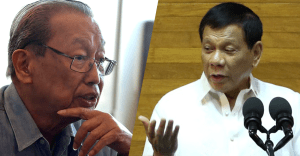 He pointed out that the recent move of the government continues to drive nails into the coffin of the peace negotiations.

Sison, in a statement on Wednesday, laid down how President Duterte “practically killed” the peace negotiations and why the resumption is impossible.

Duterte formally terminated the peace talks between panels authorized by both parties after he issued Proclamation No. 360 on November 23, 2017.

The President has declared the Communist Party of the Philippines (CPP) and its armed wing the New People’s Army (NPA) as terrorists.

He said Duterte rejected the substantive agenda of the peace negotiations stipulated by The Hague Joint Declaration and the Joint Agreement on the Sequence, Formation, and Operationalization of the Reciprocal Working Committees.

Sison added that the government ordered the arrest and murder of NDFP consultants that violated the safety and immunity guarantees under the Joint Agreement on Safety and Immunity Guarantees (JASIG).

The government, he said, also scrapped the Comprehensive Agreement on Respect for Human Rights and International Humanitarian Law (CARHRIHL) and dissolved the GRP section of the Joint Monitoring Committee while the persecution of activists and suspected members of the CPP-NPA continues.

Last month, the President terminated the appointments of the members of the government panel involved in the peace negotiations with the NDFP.

Duterte has earlier expressed his intention to create a new peace panel with at least three representatives from the military and two civilians in a speech during a campaign rally in Malaybalay, Bukidnon last Saturday.

Presidential Peace Adviser Carlito Galvez Jr. welcomed the move and said the new panel will be “directly engaging the people on the ground to address the fundamentals of the problem.”

“No one would ever be authorized by the NDFP National Council to negotiate with the GRP or its military under conditions completely under the control of the murderous Duterte regime. And no revolutionary in his right senses would ever surrender himself to the brutal and corrupt enemy,” he added.

Galvez said the localized peace talks “includes the vital component of a security lens in this process, hence the need for former security officials to be part of the panel.”

On the contrary, based on actual experience, Sison said peace negotiations have always been interfered and stopped by the “reactionary pro-US military officers at the highest level.”

He blamed the military for the collapse of the peace negotiations.

Sison recalled, “Since The Hague Joint Declaration of September 1, 1992, the reactionary diehards in the military have always acted to shorten the peace negotiations under every GRP administration whenever the NDFP rebuffs their precondition for the surrender of the New People’s Army and their maneuvers to block the negotiations of social and economic reforms.” (davaotoday.com)