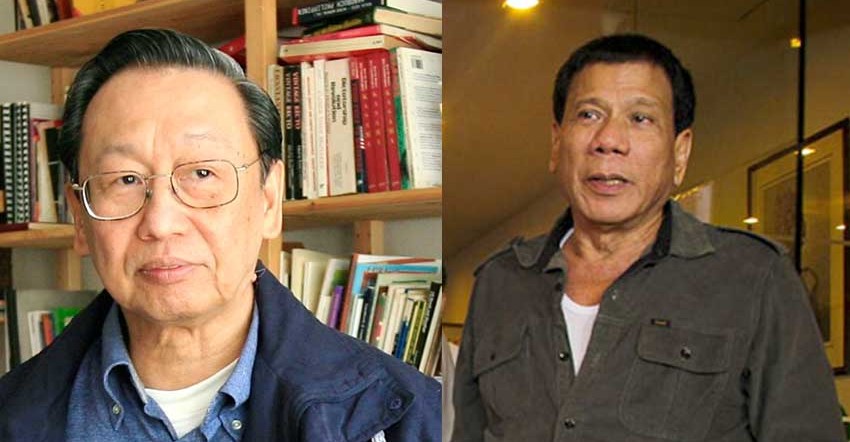 Mayor Rodrigo Duterte had a brief conversation with the founder of the Communist Party of the Philippines on Monday, April 25 where he told his former professor, Prof. Jose Maria Sison of his plans should he win this election. (davaotoday.com file photo)

DAVAO CITY – Presidential aspirant Rodrigo Duterte had a brief conversation with the founder of the Communist Party of the Philippines on Monday, April 25 where he told his former professor, Prof. Jose Maria Sison of his plans should he win this election.

In a video of the Skype conversation between Duterte and Sison, the presidential candidate from Mindanao said that he hates the “oligarchs”.

The video was posted on the Youtube account of Kilab Multimedia on Saturday, April 30. It was released by the Exodus for Justice and Peace, a religious group which acted as a third party facilitator during the release of the five police officers who were taken as prisoners by the New People’s Army. The police officers were released to Duterte by the NPAs in Paquibato district here on Tuesday, April 26 where Duterte admitted that he had a conversation with Sison via Skype.

“We saw their airplanes, tax free… P44 million, P50 million. That’s why I said, this cannot go on. And I promise you it will be a clean and fair government for everybody,” Duterte told the 77 year-old chief political consultant of the National Democratic Front of the Philippines.

Duterte also told Sison that he will “follow the pattern of Socialism in governance.” Duterte who is vocal about his support to the left said that he is a Socialist.

“Though I am not a member of the Communist party, but I am a socialist and I belong to the left. The people know, I said, this will be the first time in the history of our country that there will be a leftist President,” Duterte said.

“There’s nothing wrong with the left. We are more tolerant to the doubts of government, but we will follow what is right for our people,” he said.

Duterte told Sison that he will focus his budget on three main agenda, including education, agriculture and health.

“Education is the only way we can free the people here,” said Duterte.

Sison praised Duterte of his “good vision”. He said of all candidates, Duterte is the most open for cooperation and to achieve peace.

He reiterated that for genuine democracy to exist, there should be national industrialization and land reform.

In the video, Sison expressed his gratitude for Duterte’s facilitation of the NPA’s release of its prisoners.

“Magandang pagkakataon ito para makapag-pasalamat ako sa inyo at sa EJP kaugnay ng pagpapalaya sa limang pulis officers. Syempre nagpapasalamat ako sa… marami na kayong ginawa sa pagtulong sa mga bihag at sa lahat ng inyong ginawa dati (This is a great opportunity to thank you and the Exodus for Justice and Peace for the release of the five police officials. Of course I thank you, you have done a lot for the prisoners and for the things that you have done before),” Sison said.

Sison praised Duterte for his readiness to have a coalition government with the NDF. He said the Duterte also showed understanding for the programs of the NDF.

“That’s why once you win, our representatives should immediately meet,” Sison told Duterte, who was also a former member of the Kabataang Makabayan which he founded in 1970s.

“Kung ano naman, sumingit yung pandaraya, ay lalong ano rin, may batayan para magkita-kita ang isa’t-isa at labanan ang mga mandaraya (If ever there will be cheating, we will unite to fight the cheaters),” he said.

“Hindi sila magtatagal sa kapangyarihan. Dahil ano eh, hindi nila pwedeng lokohin yung masa sa maliwanag na sitwasyon na, ke survey nila, ke ano yung laki ng mga pulong at tsaka enthusiasm ng masa hindi na ano eh… the trend is there no? (They will not hold to power. Because they cannot fool the people in a clear situation. Whether it is their survey, or whether how big the gatherings are, the enthusiasm of the people… the trend is there right?),” he said.

Duterte said that he is just hoping that there will be no electoral fraud.

“We will do our best and if God wills it, there will be a new horizon, a new sunrise for the Philippines. I will, address it to.. yung pinakababa sir, kasi kawawa talaga (those who live in the margins are pitiful), they live in squalor and blight. And I have to think very hard and think well how to remedy the situation,” Duterte said.

Duterte, who is now the front runner in the campaign maintained his lead in the recent Pulse Asia survey conducted between April 19 and April 24 with 33 percent . He was followed by Senator Grace Poe with 22 percent. (davaotoday.com)