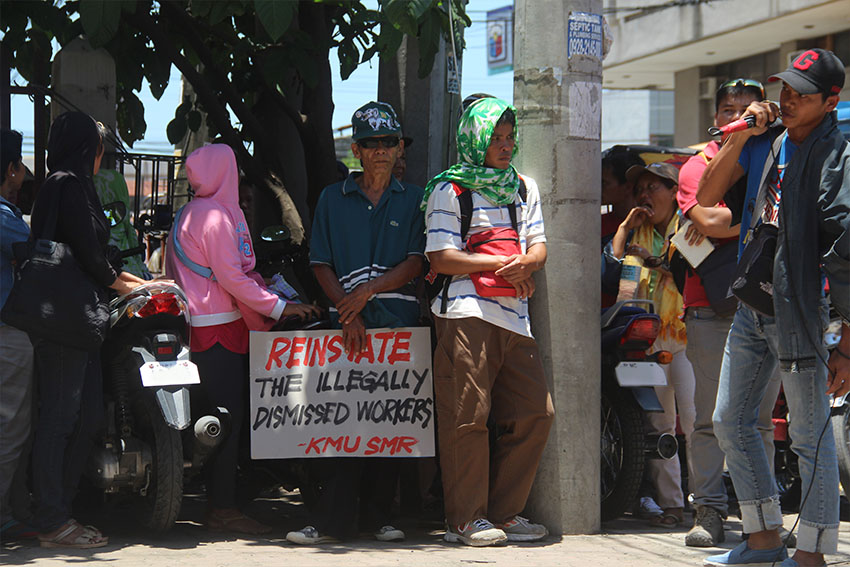 WORKERS’ PROTEST. The Shin Sun Workers Union hold picket rally in front of Shin Sun Tropical Fruit Co.’s office in Sales street, Davao City, Monday, to call on the Korean company to reinstate the 53 terminated workers.The union says the termination of the workers did not go through dueprocess and the workers. (Earl O. Condeza/davaotoday.com)

On March 16, the company terminated 53 workers who have worked for two to seven years.

Workers said the termination order was without due notice, prompting them to hold a strike in Barangay San Miguel, Compostela, Compostela Valley last April 6.

On Monday, the National Conciliation and Monitoring Board in Davao City facilitated a negotiation between the Shin Sun Workers Union and the company management.

Dennis Sordilla, a member of the board of directors of SSWU, said the company told them the retrenchment was due to “overmanning.”

“We were shocked that even those who filed requirements were dismissed. The workers spent money to comply with the requirements,” he said.

“What is worse is that there was a rehiring after,” Sordilla said.

In a video posted by Kilab Multimedia on Sunday, Rojim Balanghid, chairmain of SSWU said “the company fired workers without proper explanation or just grounds for termination.”

In the same video, Balanghid said workers were terminated after asking the company of the delay in the salaries.

Sordilla said their monthly wages were regularly deducted for benefits such as PhilHealth, SSS, and Pag-ibig funds, but the deductions were not remitted.

“It was not only this year as previous workers told us the same thing happened to them,” Sordilla said.

Sordilla also said the company do not pay for their overtime. “At first, we did not protest because we were scared of being dismissed easily,” he said.

“But in the long run, after more than seven months, I realized we need to fight this,” he added.

The plantation site of the Shin Sun in Compostela has more or less 210 workers for different jobs such as harvesting, fruit care, plantation, and delivering services.

Most the workers receive P291/day, or lower than the prevailing P309 daily rate for farmworkers in Compostela.

With the deductions, they only get P135 a day, Sordilla told Davao Today.

“We only get a net pay of P8,000 monthly. Even our 13th month pay for June and December are also deducted,” he said.

Carlo Olalo, spokesperson of the militant Kilusang Mayo Uno, said the SSWU’s strike was legitimate, and that the workers have no choice but to fight back against the illegal dismissal and other forms of unfair labor practice.

The labor leader said there have been no visible change in relation to the plight of the workers in the region as their rights have continually been violated.

“The workers’ rights to organize and to form union inside plantations continue to be abused,” he said, adding that those who have organized union groups have been ignored or are not being recognized. (davaotoday.com)