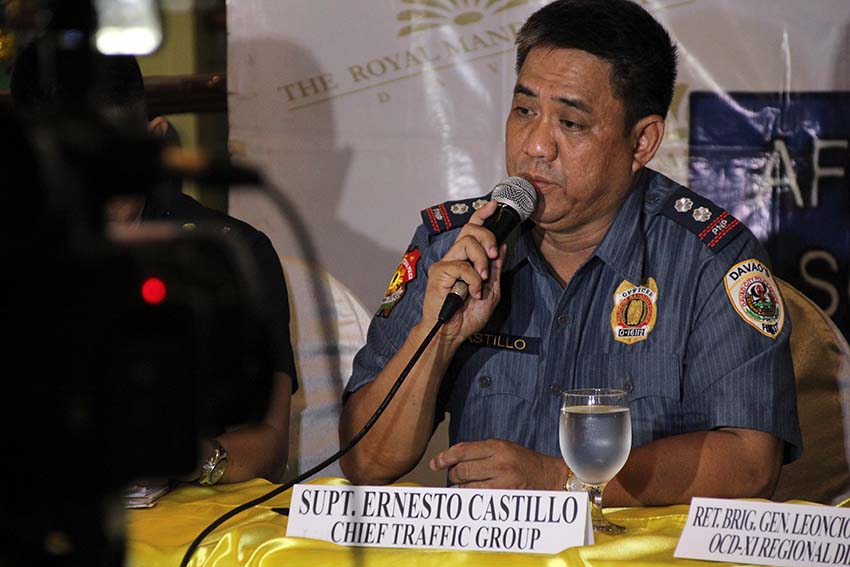 LOW APPREHENSION. Supt. Ernesto Castillo, chief of the Davao City Police Traffic Group says the noted decrease of speeding apprehensions in the city in 2016 is due to the fact that there are only two functioning speed guns left in their possession. Castillo said they have already requested for five additional speed guns to the office of the city mayor. (Paulo C. Rizal/davaotoday.com)

DAVAO CITY, Philippines — Davao City is known for its very stringent traffic rules. Through Executive Order 39 signed by then Mayor Rodrigo Duterte on 2013, drivers currently have to stay within the speed limit of 30 kph in downtown areas, 40 kph along roads leading to downtown areas, and 60 kph on national highways.

However, Davao City Police Traffic Group chief Supt. Ernesto Castillo admitted that the city’s traffic enforcement group currently lacks its most basic equipment, leading to difficulties in apprehending speeding drivers or  those driving under the influence of alcohol and drugs.

Upon Castillo’s assumption as chief since June 2016, the traffic group only had two functioning speed guns. During the implementation of the Republic Act 10586 or the Anti Drunk and Drugged Driving Act of 2013, which started last year, the traffic group utilized only one breath analyzer, resulting in low apprehension.

Castillo said they currently have no problems regarding the implementation of the Ant-Drunk and Drugged Driving Act, since investigators usually have to establish probable cause for testing for blood alcohol content level. This means that if a driver gets apprehended for violating the speed limit or other traffic infractions, fails three sobriety tests, then that’s the time the enforcer calls for a breath analyzer.

The speed gun however, is a different story.

(It’s in the speed gun that we have problems. We can’t implement the speed limit effectively because we can only cover a very limited area. We need more speed guns to prevent collisions and other car mishaps. The speed limit is actually also a preventive measure.)

“In an ideal scenario, we should have at least seven speed guns,” Castillo said.

Castillo also said that at least every police station should have one breath analyzer.

Castillo however, said that increasing the number of apprehensions is not their goal, because that would mean that the public is not learning anything.

Currently, the Traffic Group has requested to the city mayor of four more additional speed guns to augment their inventory.