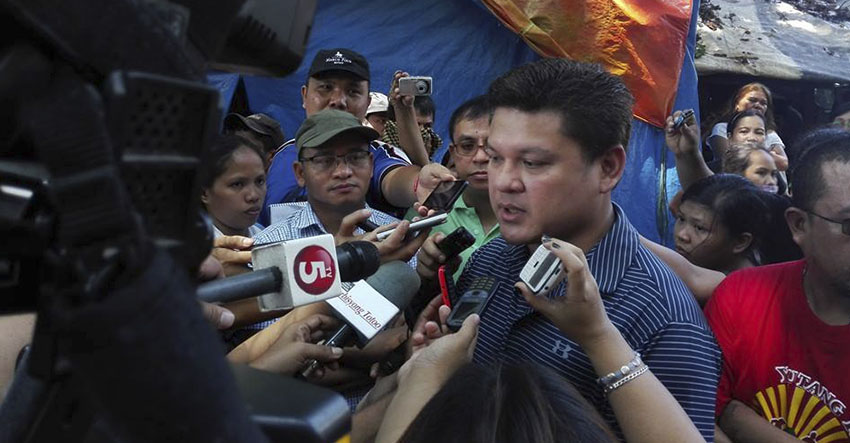 Davao City Vice-Mayor Paolo Duterte said he and Mayor Rodrigo Duterte have been monitoring the situation and have sent buses for those who want to go home but said no one should be forced if they do not want to. VM Duterte asked for the City’s 911 to render medical aid to those who need it. (John Rizle L. Saligumba/davaotoday.com)

DAVAO CITY – Local officials here intervened in the commotion inside an evacuation camp, which the Davao City Police Office raided on Thursday morning.

The camp inside the Haran compound, owned by the United Church of Christ in the Philippines, is where the indigenous peoples (IPs) from Davao del Norte and Bukidnon provinces are staying after they evacuated from their communities due to alleged militarization.

Vice Mayor Paolo Duterte announced that those who want to go home can come with him outside,  while those who wanted to stay can stay.

Duterte also asked permission from the lumads that those who are elderly, sickly and wounded be treated by the medical team from the 911.

Kerlan Fanagel, spokesperson of Pasaka Confederation of Lumad said they are thankful that the city will assist their medical needs.

He said they even requested the local government for water supply previously.

Duterte said they will wait for an hour for those who would want to go home. At least five buses were deployed by the city government outside the church compound to transport those who are willing to go home.

Duterte said after an hour, relatives of some lumad evacuees who are outside with the paramilitary group Alamara will be requested to leave.

“After one hour if they do not want to go home, those outside will,” Duterte said.

Meanwhile, Duterte confirmed in radio reports that North Cotabato District Representative  Nancy Catamco was outside the UCCP compound, but asked her not to enter to avoid further commotion.

The Salugpungan Ta Tanu Igkanugon recently declared Catamco as persona non grata after her dialogue with the indigenous people’s turned ugly a week ago.

The IPs said Catamco does not listen “to understand and see the bigger picture of (our) dire situation.”

In an AFP-PNP press conference Wednesday, Catamco vowed to get the evacuees out of the church compound.

In a similar press conference, a Manobo tribal leader also threatened to declare a pangayaw (tribal war) against the lumad evacuees.

“Whether they like it or not, we will take the children, women, and elderly from the Haran and bring them back to their homes,” Sibugan said in news reports.

The IP evacuees, however, said they will not go back to their communities until the military pulls out.

“Catamco is a spokesperson for the Armed Forces of the Philippines and what they are doing is not in aid of legislation,” Fanagel said.

Councilor Karlo Bello, chair of the city council’s human rights committee, said “the IPs will not be here if there is nothing wrong in their communities.”

Bello also joined the dialogue inside the Haran compound to check on the situation of the evacuees.

Duterte said if the IP evacuees remain in the city, it will be up to Davao City mayor and Regional Peace and Order Council chairperson Rodrigo Duterte to negotiate with the local government units where the evacuees came from to ensure the peace and safety before they return home.

Duterte assured the relatives of the evacuees who want to stay inside the camp that the city government will look after their family members.(davaotoday.com)