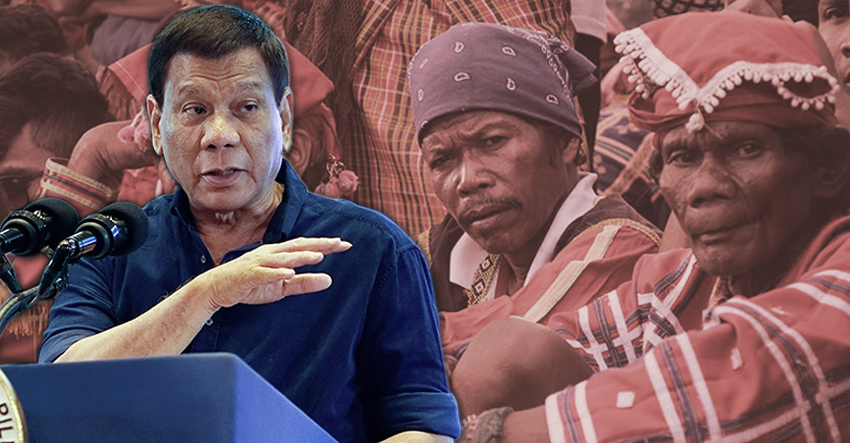 Indao said they did not believe the President was sincere in his promise to provide for the welfare of the Lumad, because they were only “forced” to become paramilitary forces, “suspected,” and “coerced” as New People’s Army rebels.

“If this (investment) happens, we cannot cultivate our lands anymore. We cannot grow local crops on our ancestral domain. They will only force us to evacuate and use the military who will not think twice to kill us if we stop their project,” said Datu Bontulan.

Kerlan Fanagel, a Blaan leader and secretary general of Pasakkaday Salugpongan Kalimuddad (PASAKA), a Confederation of Lumad Organizations in Southern Mindanao Region, said “genuine development for Lumad communities will only happen if our right to self-determination is respected.”

He said the government plans to transform at least a million hectares of land in the region to be planted with exportable banana and palm trees, and to be exploited for mining operations. He cited Agusan Petroleum Mining Corporation in Compostela and Davao Oriental; Indophil Resources NL Mining Company, Xtrata Copper and Sagittarius Mines in Davao del Norte.

“The government is not serious in helping the Lumad and is only deceiving us that they are doing so to achieve peace and development,” said Fanagel.

PASAKA has recorded 34 Lumad who were victims of extrajudicial killings under the Duterte administration. Thousands of families were also displaced in Barangay Dagohoy, Talaingod, Barangay Gupitan in Kapalong in Davao del Norte and in the towns of Arakan and Magpet in North Cotabato province. Fanagel said the evacuees are seeking refuge at their families’ homes in Tagum, Cotabato, Agusan, and in Davao City. The United Church of Christ in Philippines bishop’s house in Davao had been providing refuge to hundreds of Lumad evacuees, Fanagel said.

The announcement earned him the applause from hundreds of Lumad participants from regions 10, 11, 12 and 13, during a two-day indigenous peoples’ summit held at the Naval Station Felix Apolinario, the largest military camp in the country, in Panacan, Davao City.

“Mag-release ako ng P100 million, temporary, pangtawid ninyo sa normalcy. ‘Yun ang gamitin ninyo,” (I will release P100 million, you can use it temporarily to get you. You use it),” Duterte said.

While he admitted that the government neglected the IPs, he said his administration “is doing its best to help them.”

Duterte also offered to find investors for the ancestral domain to develop the lands and help generate income.

He said the Lumad were given their “ancestral homes” but “the problem was that they did not use it.” Duterte cited the case of a supposed palm oil plantation project in Paquibato district in Davao City which was allegedly rejected by local tribe.

“What’s their valid reason for disallowing the planting of palm oil?” the President asked.

“I will send your children to any good school, or if you’re in Manila and you want to send them to San Beda, Ateneo, La Salle, you may enroll them there and the government will pay for the tuition fee,” Duterte said. (With reports from Robby Joy D. Salveron/davaotoday.com)