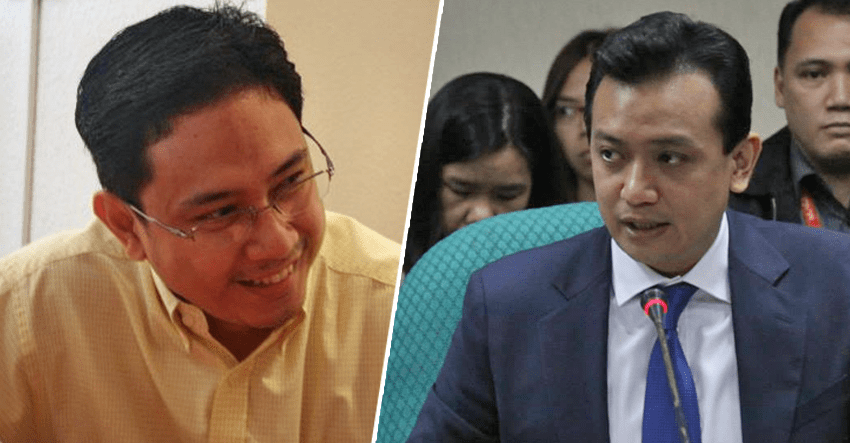 “Senator Trillanes is imputing malice in saying that my appearance before the BOC is because of smuggling. He is just a desperate (rumor-monger) who happens to be a Senator,” Carpio said on his Facebook page.

Trillanes on Tuesday, August 29, accused Carpio, the spouse of Davao City Mayor Sara Duterte, of being involved in smuggling.
Explaining his side, Carpio said his jobs requires to represent clients to government agencies.

He said Trillanes has put “malice” on his appearance and called him a “rumor-monger.”

The lawyer’s statement came following the testimony of a customs official who said he saw Carpio met with former customs chief Nicanor Faeldon at the Bureau of Customs.

The former customs intelligence service chief, Neil Estrella, revealed in a recent Senate hearing that he saw Carpio come out of Faeldon’s office.

Trillanes, a staunch-critic of the Duterte administration, said Carpio “has no business being there.” He said Carpio’s meeting with Faeldon confirms the existence of the alleged Davao group which reportedly operates at the BOC and asks money from brokers.

In a previous statement issued in June, Vice Mayor Duterte said even before his father was elected as President, he has been dragged in anomalies at the BOC.

The younger Duterte challenged his accusers to prove their allegations as he has yet to see a case filed against him.

“I have been challenging all and sundry to file a case against me if they could prove that I was involved in any anomaly at the BoC and yet no one has,” he said.

President Duterte previously said that he will resign if allegations that his children is involved in smuggling are proven true. (davaotoday.com)