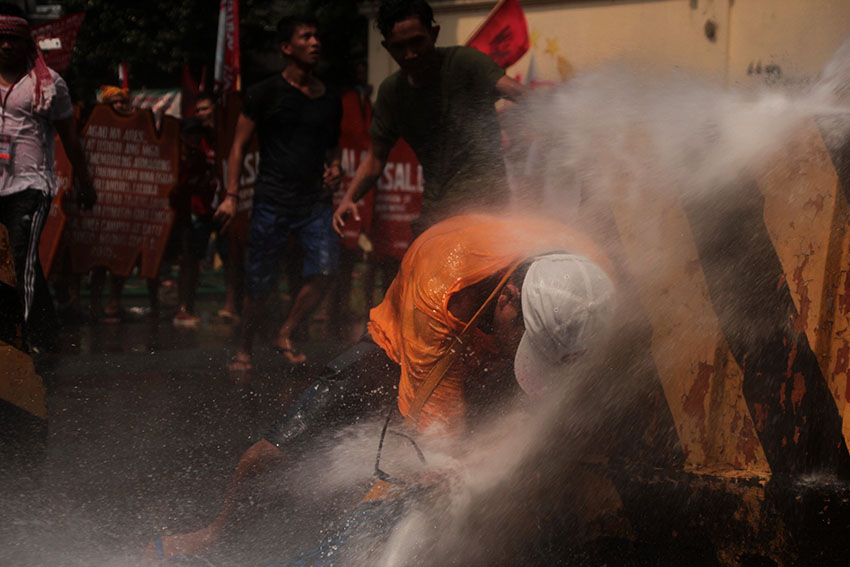 A protester receives the full might of a water cannon fired at him from the Army’s national headquarters, Camp Aguinaldo in Quezon City during a protest rally led by national minority alliance group SANDUGO on Tuesday, October 18. (Paulo C. Rizal/davaotoday.com)

QUEZON CITY, Philippines – At least 1,000 Moro and Indigenous peoples braved the water cannons of the military during a protest rally in front of the Armed Forces of the Philippines national headquarters in Camp Aguinaldo here Tuesday.

The protesters led by the national minority alliance group, SANDUGO, were dispersed after they slammed the gates of the office for a noise barrage.

Protesters, mostly national minorities, responded to the dispersal by throwing paint bombs towards the Army camp. One of them spray painted the word “Berdugo” (a Filipino word for butcher) on the gates.

A second water cannon was used three minutes later when the protesters tried to maintain their ranks. The dispersal try lasted for about five minutes until the protesters left for the nearby national headquarters of the Philippine National Police in Camp Crame to continue their program.

No protesters were hurt in the said dispersal.

In a press release, the group scored the AFP for “sabotaging the peace talks and hindering the positive developments in the peace talks with the Moro groups and National Democratic Front of the Philippines.”

“The AFP has been violating the ceasefire with their continued military operations and harassment tactics. Paramilitary groups protected by the AFP continue to persist and wreck havoc in Lumad communities. Human right violators and killers of indigenous and Moro leaders are still not brought to justice,” said Kerlan Fanagel, a B’laan and one of SANDUGO’s convenors.

Meanwhile, human rights group KARAPATAN secretary general Cristina Palabay downplayed the dispersal, saying that the use of water cannons could not deter the protesters from fighting for their rights.

“The continuing political killings, militarization and occupation of our indigenous people’s communities and schools, from Luzon to Mindanao is simply unacceptable. They think they can stop us using water cannons, but the unwavering resistance of the indigenous as well as the Moro people shows that they will fight for their rights no matter what happens,” Palabay said.

Brigadier General Alan Martin, Army camp commander said the protesters were dispersed for vandalizing the gate and were throwing objects that threatens civilians passing by. (davaotoday.com)