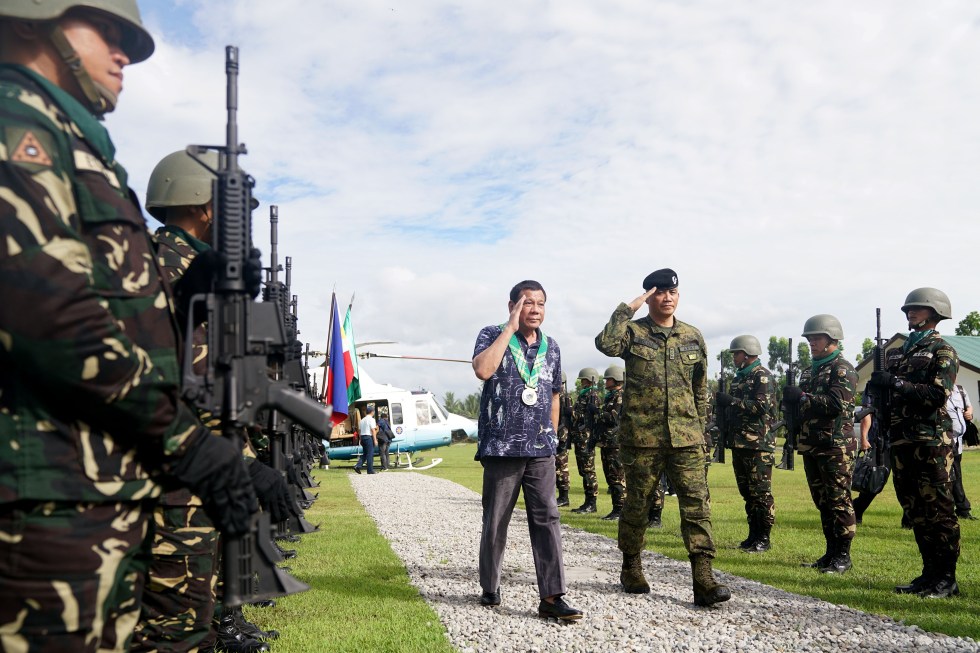 President Rodrigo Duterte shows solidarity with the soldiers during his visit to the troops of the 1st Mechanized Infantry Brigade at Camp Leono in Tacurong, Kudarat on June 7, 2017. (PRESIDENTIAL PHOTO)

DAVAO CITY, Philippines – It was the assessment given by the Armed Forces of the Philippines and the Philippine National Police that Mindanao has reached a “critical moment” that led to the declaration of Martial Law.

President Rodrigo Duterte disclosed this when he visited the headquarters of the Army’s 603rd Infantry Brigade in Pigcalagan, Sultan Kudarat town in Maguindanao on Friday, May 9.

“Ganito ‘yan. I declared martial law because the Armed Forces of the Philippines and the Police told me na it has reached its critical moment,” Duterte said.

He was on an official visit to Russia when the ISIS-linked Maute Group and the Abu Sayyaf attacked Marawi City last May 23.

Duterte said he was briefed by top military and police officials of the situation and Marawi and he found out that it (Marawi siege) turned out to an open rebellion.

“Wala talaga akong magawa. Sabi ko, ‘How many have died so far?’ Sabi nila, ‘Sir, marami tayong casualties.’”
The President also reiterated his warning prior to the declaration of martial law: “I have been saying all along, even days before, do not force my hand into it.”

But Duterte also clarified that it was not the intention of his administration to declare martial law perpetuate into power.

“Sige kayo tanong diyan kung kailan matapos ito. This is my answer to the doubting Thomases: Walang ambag, ambisyon dito na mag-perpetuate self in power,” he pointed out.

He added that the AFP and the PNP “would not aim for a war that would result in the killings of many lives.”

He also hit the other political parties and personalities who he said have been criticizing the martial law declaration.

Duterte did not specifically identify those political parties and personalities.

“They’re trying to think that we in government are trying to perpetuate our self in power,” he said.

He added that he could have resigned from his post had Alan Peter Cayetano or Ferdinand “Bongbong” Marcos won the vice presidential race in May last year.

No combined forces vs. Maute

Duterte also told the soldiers and visitors gathered during his visit that the New People’s Army offered to help the in continuing fight against Maute Group.

He clarified, though, that it is not because of trust that he declined the offer of the NPAs, but on the idea that “it simply does not fit into the picture.”

He also told Misuari to just leave the Marawi situation to the government.

“Just give us your understanding and be patient. We will restore order in this country,” he emphasized.

Duterte also clarified that he is honoring his words with the MNLF and the Moro Islamic Liberation Front during the peace negotiations.

“We must have a federal government, otherwise, we will never find peace,” he said.

Duterte paid tribute to the fallen and wounded soldiers during his visit to 603rd Brigade on Friday, and called them “comrades who selflessly put their lives on the line to keep our country safe and strong” and made an assurance that their “valiant efforts in restoring order and keeping peace in Sultan Kudarat and the surrounding areas will not go unnoticed.”

He said the country and the Filipino people are “forever grateful to our brave soldiers who left their families and the comforts of their homes to defend our sovereignty and uphold the Constitution.”

He also commended the continuing drive of the Philippine Army against various terrorists and extremist groups.

“Your hard work and relentlessness against illegal drugs have also resulted in the neutralization and apprehension of drug personalities and the confiscation of drugs and drug paraphernalia, making your area of responsibility safer from the drug menace,” he said, as he enjoined them to remain determined in pursuit of the enemies of the country and serve the people.

Duterte also labelled the persisting threats of terrorism and insurgency as “the scourges of the land that we must rid of – swiftly and decisively.”

By defeating such threats, the President said the Filipino people can go on to rebuild their lives, homes, and communities. (davaotoday.com)