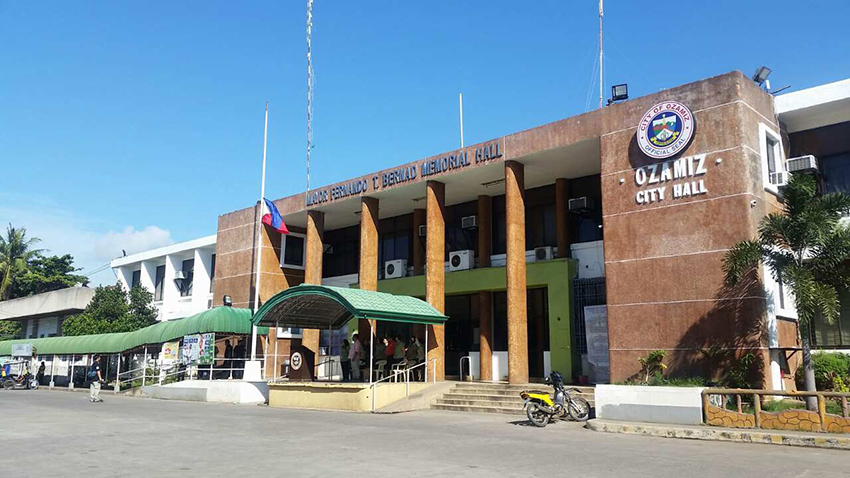 MOURNING. The local government of Ozamiz City puts the Philippine Flag in half mast during their flag raising program on July 31, a day after City Mayor Reynaldo Parojinog was killed in a shoot out during the service of search warrants at his house for allegedly possessing illegal firearms, ammunitions and explosives. Aside from Parojinog, his wife, two siblings and eleven others were also killed in the said police operation. (Divina M. Suson/davaotoday.com)

DAVAO CITY, Philippines — The National Democratic Front in Zamboanga said the killing of Ozamiz City Mayor Reynaldo Parojinog Jr., his wife Susan and 14 others is an “extra-judicial death sentence.”

In a statement dated August 2 but was released a week after the police operation that killed Mayor Reynaldo Parojinog Jr and his wife Susan along with 14 other people, Adan Sindapan of NDFP Zamboanga Peninsula said they condemn the “brutal mass murder” of the Parojinog household last July 30.

Sindapan said the police only served a violent extra-judicial death sentence for the mayor and his family who were previously linked by President Rodrigo Duterte to illegal drug trade.

Duterte has defended the police in the operation saying he has ordered the police that those who will put up a fight should be killed.

“The police and the military should make sure that their enemies are dead. Otherwise, the other guy can still pull the trigger and you will end up with dead police or dead military soldier,” Duterte told reporters after speaking at the 113th founding anniversary celebration of the Bureau of Internal Revenue on Wednesday, Aug. 2.

He said the family has run the city like its own “feudal state.”

The policemen raiding the houses of the Parojinogs said the security personnel of the officials fought the authorities when they served six search warrants around 2:30 am in San Roque, Lawis, Ozamiz City.

But the NDFP leader said the serving of the search warrants in wee hours “was downright phony and ridiculous.”

“All the Parojinogs in the hunt list of the CIDG are all high-profile public officials of the city and could easily be invited or arrested anytime during public office hours at the Ozamiz City hall,” Sindapan said.

“As Duterte chants build, build, build, his police and army executes kill, kill, kill. The crazed killing spree is unjustified as it is unwarranted. There was absolutely no resistance from the Parojinogs contrary to official claims that the Parojinog guards drew first blood,” he added.

Sindapan admitted that the Parojinogs of Ozamiz “were engaged in gangsterism, illicit drug trade combined with intense anti-NPA vigilantism in the 80s and early half of the 90s.”

He said the ​M​ayor was a “condemned man” who was perennially accused of protecting the drug trade.

“We could not identify with nor sympathize with Aldong’s anti-social past. Existing Philippine electoral laws cleared and allowed the Parojinog siblings to run for elective public posts which legally cleared them from past wrongdoings and lingering questions about their desirability of character,” he said.

But Sindapan said Parojinog deserved to be tried in court than being “butchered like a lousy dog in the end.”

“Dead men tell no tales. That is the only logic behind Aldong’s tragic rub-out,” Sindapan said.

Sindapan added that the problem on illegal drugs is a symptom of a sick society where there is widespread poverty.

“Buried in the headlines are the nameless faces of the Parojinog household staffs of helpers and errand boys who double up as CVO and as gate sentry. Most of the victims are jobless peasants who found temporary manual work as floor sweepers, clothes washer and animal farm tender,” he said.

He said the problem on drugs can only be solved by eradicating the roots of poverty and inequality. He added that the government’s “mass murder and rub-outs” will not solve the problem.

The NDFP spokesman also said that martial law in Mindanao has now become a convenient way to circumvent due process.