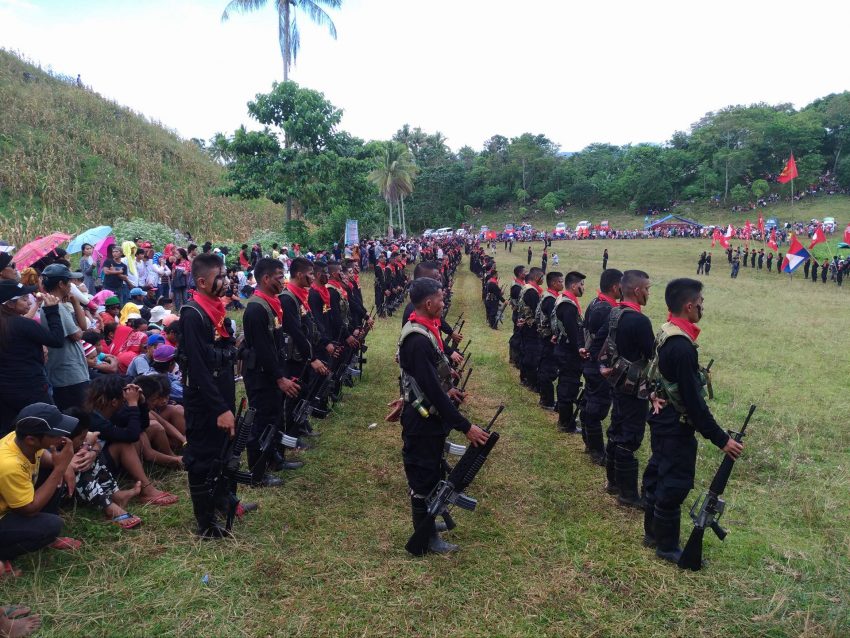 Six platoons of the 1st Pulang Bagani Company performs a tactical inspection during the 48th anniversary celebration of the Communist Party of the Philippines in Paquibato district in Davao City on Monday morning, Dec. 26, 2016. (Zea Io Ming C. Capistrano/davaotoday.com)

According to NDF, as of 2016, the NPA has more than 110 platoon-sized units operating in 71 provinces all over the country.

The CPP, in a statement on its 48th founding anniversary on December 26, has vowed that it would “further strengthen its leadership of the people’s war by firmly directing the New People’s Army in waging revolutionary armed struggle.”

“The Party draws lessons, both positive and negative, from the successful advance of the revolutionary armed struggle in Mindanao, in order to address the stark imbalance between the development of the people’s war in Mindanao, on the one hand, and the stagnation in Luzon and Visayas,” the CPP added.

During the CPP’s anniversary celebration at Barangay Lumiad in Paquibato District, this city, NDF consultant Eduardo Genelsa said “Mindanao continues to be resilient and to advance despite escalating enemy attacks because communists, cadres, NPA combatants, and revolutionary forces have vigorously waged the armed struggle and raised the people’s war to greater heights.”

Genelsa and other NDF leaders asserted that there can be no peace until the roots of armed struggle are addressed decisively, noting that NPAs are now “stronger more than ever to wage armed revolution, gain concrete benefits for the people, and ultimately attain justice and true peace.”

Asked why Mindanao stayed resilient, Genelsa said during the open forum at the National Peace assembly: “Maybe it is the principle.”

A bit of history

Genelsa said that the rising number of NPA troops in Mindanao started during the Martial law, where people started to fight against the dictatorship.

“In 1980s onwards, the number of guerilla bases rose. It was the time when the people were amazed when they saw the NPA,” Genelsa said.”The people called them Nice People Around.”

“When I was invited, I said I would go because it would be held here in Mindanao where the people’s war is very advanced,” Araneta said. “I am so honored to be here.”

The government is now engaged in a peace talks with the National Democratic Front of the Philippines, the political arm of the CPP. The third round of talks will be held on January 18 to January 25 next year in Rome, Italy. (davaotoday.com)