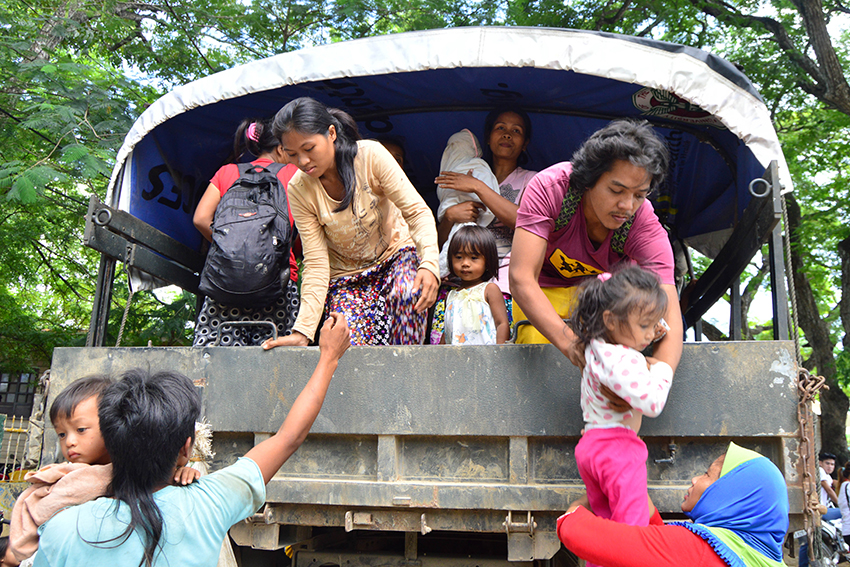 ​Families from the rural villages in Opol, Misamis Oriental arrive at the town’s evacuation center on Tuesday, August 8, after seeing armed group believed to be members of the New People’s Army in their communities. The local government said more civilians are expected to flee their homes in the coming days. (Jigger J. Jerusalem/davaotoday.com)

MISAMIS ORIENTAL, Philippines – More rural villagers are expected to arrive at the evacuation center in the municipality of Opol, Misamis Oriental after a group of armed men ​believed to be ​members of the New People’s Army were seen in the town’s four hinterland communities since last week, the mayor said Wednesday.

As of August 9, there were already 124 families or 570 individuals who fled their homes in the villages of Nangcaon, Tingalan, Limonda and Cauyonan​. They have stay​ed​ at Opol’s evacuation site, said Engr. Romnel Lunoy, chief of the Municipal Disaster Risk Reduction and Management Office.

The first wave of evacuees arrived on Monday afternoon, he said.

The figure could increase as more people expressed their intent to stay at the town’s temporary shelter until their communities are cleared of armed insurgents, said Opol Mayor Maximino Seno.

He said they expect for the influx of evacuees but added they are ready to receive them. The municipality has an evacuation center that can accommodate hundreds of families.

The displaced residents left their residences for fear of fighting between the government and the NPAs who vowed to carry offensives against the government after President Rodrigo Duterte extended Martial Law in Mindanao until the end of the year.

Seno said the military, who are searching for the guerrillas in the four barangays, have reported they have not seen any NPA in the area, as of Wednesday.

“The Army told me the people can go home if they wish to, but I don’t want them to, for now,” Seno said Wednesday, adding he is concerned for their safety.

The municipal council of Opol has already declared under state of calamity the four barangays on Tuesday so the local government can utilize the town’s calamity fund for the evacuees’ food provisions while they are staying at the evacuation site.

He said the town legislature has approved the withdrawal of P500,000 for the displaced civilians’ daily meals taken from the P10 million calamity fund, which is good for seven to 10 days.

Seno said the alleged NPA fighters were seen crisscrossing the mountain villages and were allegedly trying to recruit locals prompting residents to leave their homes.

Based on the information provided by the village leaders, Seno said about 200 armed individuals were spotted in the four barangays.

“Most of those who fled were approached and tried to be recruited by the NPA,” Seno said.

Seno said the military has already conducted clearing operation in said barangays and he is hoping the displaced villagers could go back to their home the soonest time possible.

Seno has assured that as long as they’re staying at the Opol evacuation center, their basic needs such as food, health, even the education of the displaced civilians’ children, are being addressed.

“Cris” (not his real name), 10, said their teachers went with them to the evacuation site to administer their periodic examinations. Some rooms at the evacuation center were being used as temporary classrooms.

Gennys Mangcunsay, a village councilor at Nangcaon, said many of the residents felt threatened by the presence of the armed group who grew larger since they were spotted passing by the highland communities in past few days.

“We had to get away because we feel it is dangerous for us if they (armed group) are in our community,” Mangcunsay, who’s also a tribal leader, said.

Mangcunsay said Seno ordered the municipal trucks to fetch the residents after barangay leaders made the request.
Rosendo Lucnoran, 60, a farmer residing at Zone 3 in Nangcaon, said he personally saw and even talked to some members of the armed group, who only identified themselves as “sundalo sa kabus” (army of the poor) and not as NPA.

“When I asked them if they are NPA, one of them told me, ‘we are the army of the poor. We will protect you.’ I replied: ‘How can you protect us when we fear you? You even killed innocent people,’” he recounted.

Lucnoran said most of the guerrillas were young persons, many of whom were women. They were seen passing by and talking to residents in the past few days.

“They were so young and pretty. They were wearing camouflage pants and combat boots. They were carrying high-powered firearms. They were not even wearing masks,” he said, referring to the female fighters.

He said those who he interacted with did not try to recruit him or his neighbors but were looking for some persons, adding the rebels have a list of names with them and were asking for the whereabouts of those on the list.

Senior Superintendent Roland Destura, the Misamis Oriental provincial police chief, said in an interview that they have already alerted the municipal police offices in the neighboring towns to be on a lookout for the presence of the armed group.

In a separate interview, Captain Joe Patrick Martinez, spokesperson of the Philippine Army’s 4th Infantry Division, has confirmed that the armed individuals were members of the NPA who are planning on carrying out attacks in the area.

He said these NPA units that were sighted were the ones that suffered from defeats in encounters with the state forces particularly in Bukidnon.

Martinez said the military is doing its best to intercept the Maoist rebels in their combat operations in the region.(davaotoday.com)