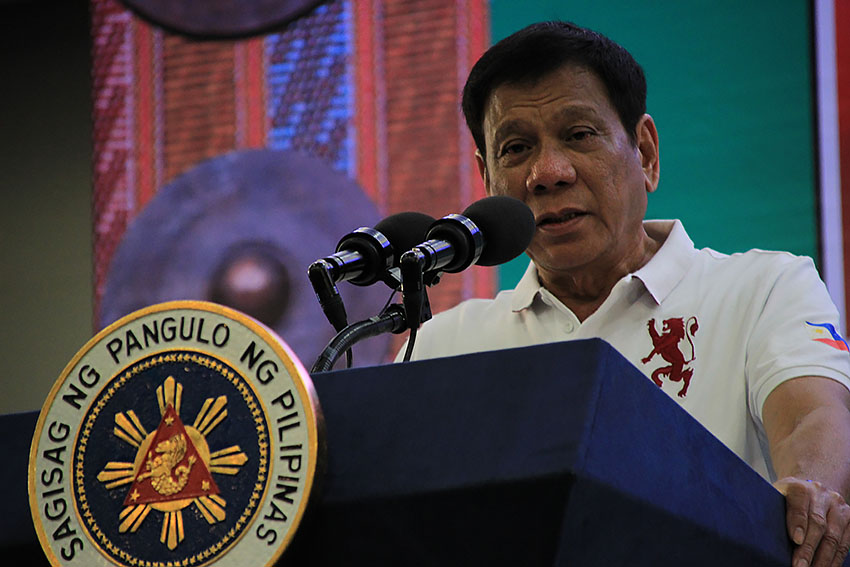 President Rodrigo Duterte says that it is not the Middle East, but the US, who “imported terrorism”. Duterte blames foreign intervention for the violence in Middle East. (Paulo C. Rizal/davaotoday.com)

DAVAO CITY — What is happening now to Middle East is to be blamed on foreign intervention, said the Philippine’s 16th President, Rodrigo Duterte.

President Rodrigo Duterte, who spent his weekend here gracing the culmination of the holy month of Ramadan during the first Mindanao Hariraya Eid’l Fitr 2016, told around 700 Muslim Filipinos of the effect of “colonialism” to countries like Iraq, Libya, and Syria.

“It is not the Middle East that is exporting terrorism in America. America imported terrorism,” Duterte said citing the case of the Britain and US-led attack in Iraq in 2003.

“They ruined Middle East,” Duterte said adding that the two countries “forced their way to Iraq and killed Saddam (Hussein).”

Duterte said Hussein “was a dictator but he was in full control of the country.”

A report by former British bureaucrat, Sir John Chilcot, called the “Iraq Inquiry”, found that the decision of the British Prime Minister Tony Blair to join the US-led invasion was “unnecessary”.

“Military action might have been necessary at some point, but in March 2003 there was no imminent threat from Saddam Hussein,” a part of the report, published on Wednesday, July 6, was quoted as saying.

“Because they were pushed to the wall of the failed promises,” he added.

Duterte said the same intervention happened in the country when the Spaniards led by Ferdinand Magellan brought Christianity here in 1521.

“Over the decades by force, your Malay brothers became Christians, so it was the religion that was rammed down their throats. And you know how the Spaniards are, they were very cruel at the time,” he told the audience.

He said this history must be taken by the Filipinos as a “footnote to understand each other.”

Duterte said that is the reason why he is not calling Abu Sayyaf “criminals”.

“Kaya sabi ko I am not including Abu Sayyaf dito sa criminality. You’ve never heard me say mga criminal, it is a different sect because these were the guys who were driven to desperation,“ he said.

In a book by Prof. Rommel C. Banlaoi, titled Al-Harakatul Al Islamiyyah, Essays on the Abu Sayyaf Group, it is said that the ASG was formed by Khadaffy Janjalani when former Moro National Liberation Front members decided to get out of MNLF becoming “one new group of Mujahideen”.

But Duterte has also repeatedly said in his previous speeches that there will be “a day of reckoning” with the ASG.

“I will just say ‘surrender unconditionally, release all prisoners, hostages or we fight,” he said speaking before the business summit held in Davao on June 21. (davaotoday.com)