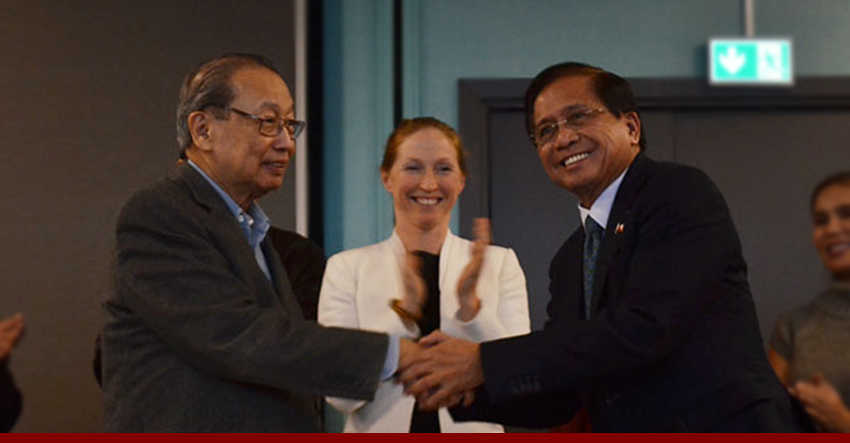 A close contact between the government and the National Democratic Front prior to the third round of peace talks on January next year is important for the success of the negotiations, an official of the Royal Norwegian Government said. (Zea Io Ming C. Capistrano/davaotoday.com)

DAVAO CITY, Philippines – Peace remains unreachable as the year ended with the negotiations between the government and Communists virtually on a stand still.

Despite two rounds of formal talks this year, President Rodrigo Duterte declared this month the Communists as terrorists, a 360-degree turn around from calling them previously as revolutionaries.

For the National Democratic Front of the Philippines (NDFP), however, nowhere is the country headed to end landlessness and oppression of d majority poor, thus they opt to continue waging armed struggle.

Will they ever go back to the peace table?

In his several speeches this month, the self-proclaimed socialist President, Duterte said he could not agree to what the Communists want.

“Apparently, there you would want to have a coalition government. I do not have any problems with that, except that as I’ve said before, in many of my statements previously, I cannot give them or share with them a sovereignty which is not my own. It is not mine to give,” Duterte said.

He said when he reviewed the documents of the negotiators he saw that the Communists “want a coalition government.”

The country, he explained, “is run by a Constitution.”

Martial law in Mindanao was also extended by Congress from only 60 days to 588 days, now out to run after the Communists who were outlawed by Presidential Proclamation No. 374.

The revolutionary movement denounced the one-year extension of martial law, saying it is a “de facto” nationwide declaration.

What exactly is going on at the Palace?

“Part of its deceitful strategy is to focus on Mindanao first and perfidiously work its way up to encompass the Visayas and Luzon, so that, in dividing the nation, Duterte will avoid facing the impact of a nationwide uprising against his fascist rule,” Jacinto said.

In turn, the revolutionary movement “is ready to face death” and fight against Duterte, said Jacinto.

“Revolutionaries, as well as the struggling masses, would rather face death fighting rather than bow down to Duterte’s fascist dictatorship,” he said.

The Communists also said they will help in ousting Duterte. 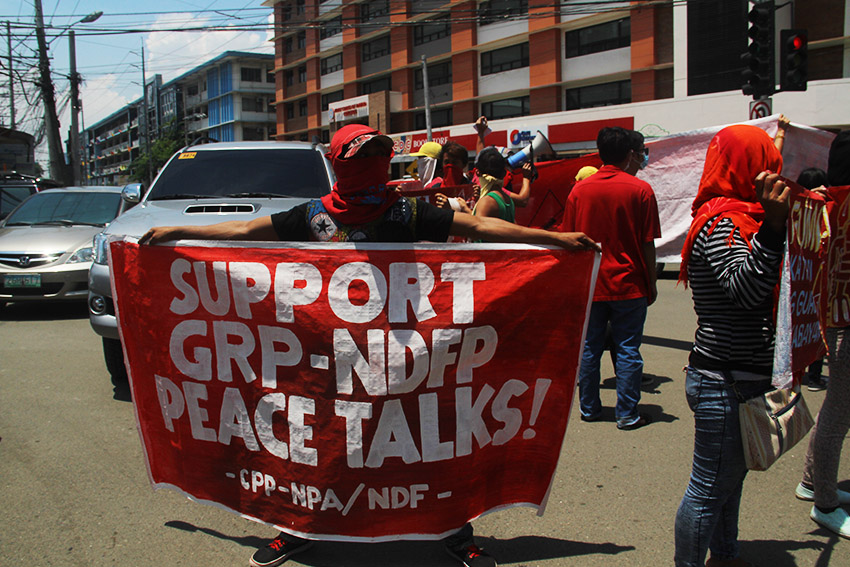 During his first State of the Nation Address (SONA) in July 2016, Duterte immediately offered the Communists a unilateral ceasefire.

“We will strive to have a permanent and lasting peace before my term ends. That is my goal, that is my dream,” Duterte said.

Communist Party of the Philippines (CPP) founding chairman Jose Maria Sison said they are “hopeful” to forge a peace agreement with Duterte.

But, after a year Duterte is apparently pursuing the other way to peace – by pounding the communist movement and calling them “enemies of the state” whom he is out to bully.

In his second SONA, Duterte admitted: “peace eludes us still.”

“So much time has lapsed, so many lives have been lost and so much destruction has been wrought but peace eludes us still. Sometimes I am almost tempted to conclude that peace might not be able to come during our lifetime,” he said.

Days before he delivered his annual speech, Duterte announced he will wage war against the Communists after the battle in Marawi is concluded.

During those times, the two parties were set for a series of backchannel talks to discuss on how to resume the talks.

On July 19, Presidential Adviser on the Peace Process, Jesus Dureza announced the backchannel talks are canceled after an encounter between the NPA’s and members of the Presidential Security Group in the tri-boundary of Arakan, North Cotabato, Bukidnon and Davao City.

The GRP and NDFP held two successful rounds of formal talks this year: the third round of talks was held in Rome, Italy in January and the fourth round was held in Noordwijk, Aan Zee in The Netherlands in April, with both rounds facilitated by the Royal Norwegian Government. 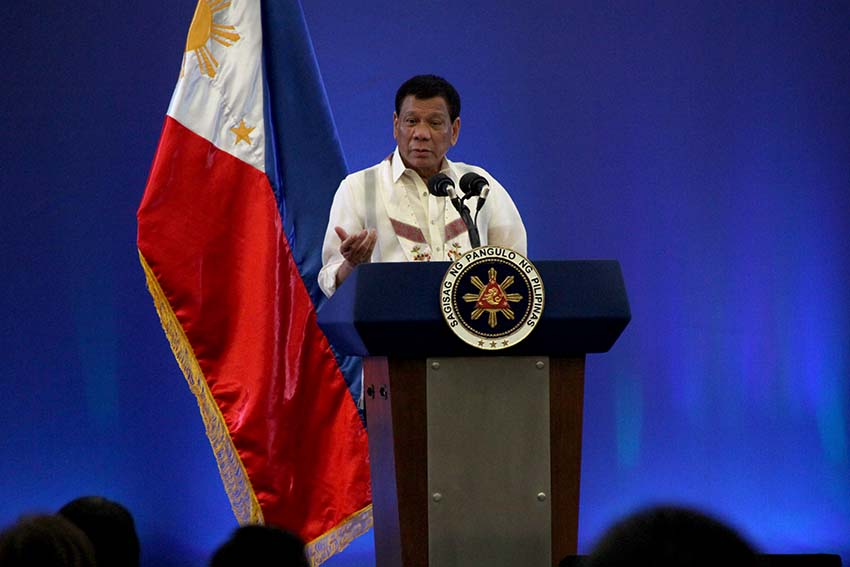 ABOUT FACE. President Rodrigo Duterte announces the cancellation of peace negotiations with the National Democratic Front and challenges them to “another 50 years” of fighting in his speech during the Davao Investment Convention held at the SMX Convention Center in Lanang, Davao City. Duterte ends talks with the communists after a series of clashes erupted between the New People’s Army and the military, one of which included the encounter with the President Security Group. (Paulo C. Rizal/davaotoday.com)

However, since May, the fifth round of the formal talks between the government of the Republic of the Philippines (GRP) and the NDFP have been stalled. The government said there was a “lack of compelling reason” to proceed.

Dureza, the government’s peace adviser, said there was “no change of situation” referring to the position of the government that the CPP should rescind its order to the NPAs to intensify attacks amid Martial Law declaration in Mindanao.

Now, what GRP peace panel chief Silvestre Bello described as a “temporary setback” has been on for seven months, growing deeper and uglier.

On November 22, Dureza again announced the cancellation of all their planned meetings with the CPP-NPA-NDFP following Duterte’s order that there will be no more peace talks.

Dureza said there will be no peace negotiations “until such time as the desired enabling environment conducive to a change in the government’s position becomes evident.”

His actions came a month after Marawi was declared “liberated from terrorists’ influence.” 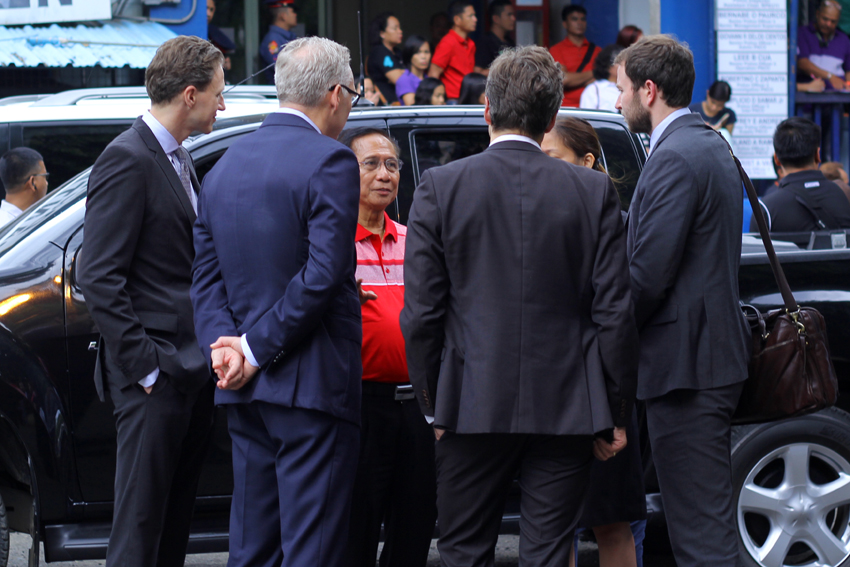 NORWEGIAN AMBASSADOR Erik Førner (second from left) talks with incoming Presidential Peace Adviser Jesus Dureza (center) inside the Davao City Police Office compound on Friday afternoon, while President-elect Duterte was delivering his speech. Førner is set to talk to Duterte later today regarding the status of Kjartan Sekkingstad, the Norwegian national who is still in the hands of the Abu Sayyaf Group.(Ace R. Morandante/davaotoday.com)

The government’s promise of peace was replaced with the vow to crush the communist insurgency by the end of 2018.

NDFP Mindanao spokesman Joaquin Jacinto said Duterte has revealed “his true character as a puppet of US imperialism.”

“From the start, he was already an avowed implementer of neoliberal policies, ensuring profits for the business interests of big bourgeois compradors and foreign monopoly capitalists,” Jacinto said adding the government’s “Build, Build, Build” program and the new tax reform will burden the public with debt and more taxes.

In Mindanao, he said, the government has also brought death and destruction, after the crisis in Marawi and the extension of Martial Law in the island.

Human rights organization Barug Katungod Mindanao said there were 92 cases of killings of activists and 428 cases of trumped-up charges filed against members of progressive organizations, which Duterte has tagged as legal fronts of the CPP and NPA.

Karapatan Alliance for the Advancement of Human Rights in Southern Mindanao region (SMR) said the killings targeted those from the peasant sector “where they have intense anti-mining struggles.”

Jay Apiag, spokesperson of Karapatan-SMR said 32 out of 63 victims of killing in Davao region. Meanwhile, Apiag added they have recorded 18 incidents of aerial bombings in communities. 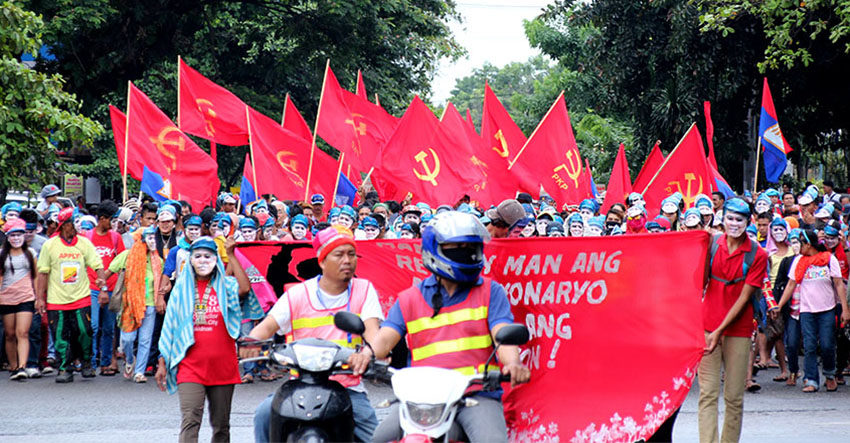 REVOLUTIONARY. An estimate of 40,000 people marched from Magsaysay Park to Rizal Park in Davao City in support of the resumption of peace talks between the government of the Philippines and the National Democratic Front. (Earl O. Condeza/davaotoday.com)

The peace negotiations have been on and off since the conclusion of the third round of talks last January.

The NPA terminated its ceasefire on February 10 saying the military took advantage of the ceasefire to encroach their areas.

The ceasefire declared by the NPA on August 28 was the longest in history.

Duterte then suspended talks with the Communists on February 4. On the following day, he called the CPP-NPA-NDF as terrorists after three soldiers were killed by the NPAs in an ambush in Malaybalay, Bukidnon 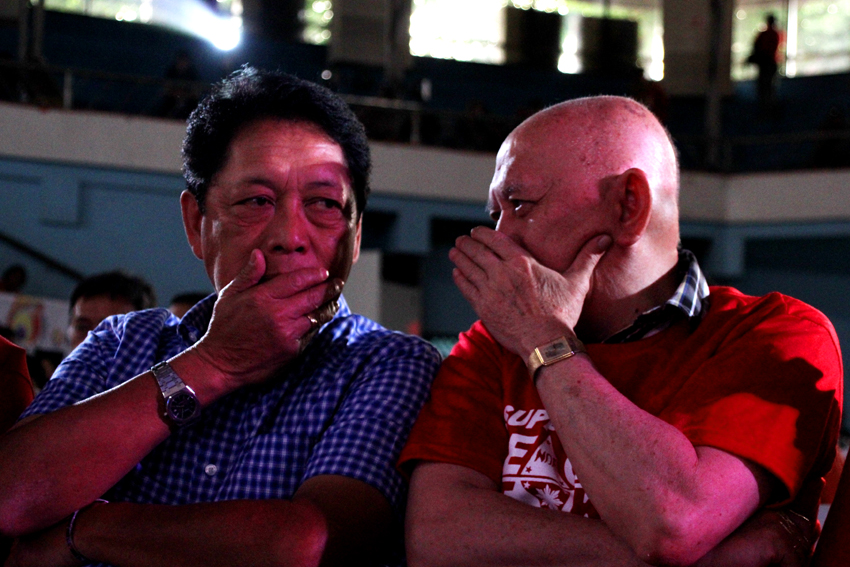 Government panel chief negotiator and incoming Labor Secretary Silvestre Bello III converses with Fidel Agcaoili, one of the members of the National Democratic Front negotiating panel during the peace forum at the Davao City Recreation Center, on June 29, 2016. Both panels will resume the formal peace talks on August 22, 2016 in Oslo, Norway. (davaotoday.com file photo)

The Communists said the fifth round of talks was disrupted by the “unreasonable demands” of the government.

NDFP’s peace panel chair Fidel Agcaoili said the government want the CPP to: “1) rescind its order to the NPA that was in the main responding to the intensified AFP military operations nation-wide before and after Duterte’s declaration of martial law in Mindanao and, 2) that the NDFP immediately sign a joint ceasefire agreement even without the necessary agreements on social, economic and political reforms in place.”

The Communists felt outrage in people being rounded up and threats against people who are deemed as anti-government.

“In light of these out and out attacks against the people and their revolutionary forces, NPA units are left with little choice but to undertake more and more tactical offensives in order to defend the masses and the people’s army by stopping the reactionary state armed forces from carrying out their onslaught,” Agcaoili said.

The NDFP negotiator also said there could be no immediate ceasefire if there were no agreements on reforms in place.

He said the demand for the NPA to stop fighting was “one-sided” citing that the Armed Forces of the Philippines continue its militarization in the countryside. 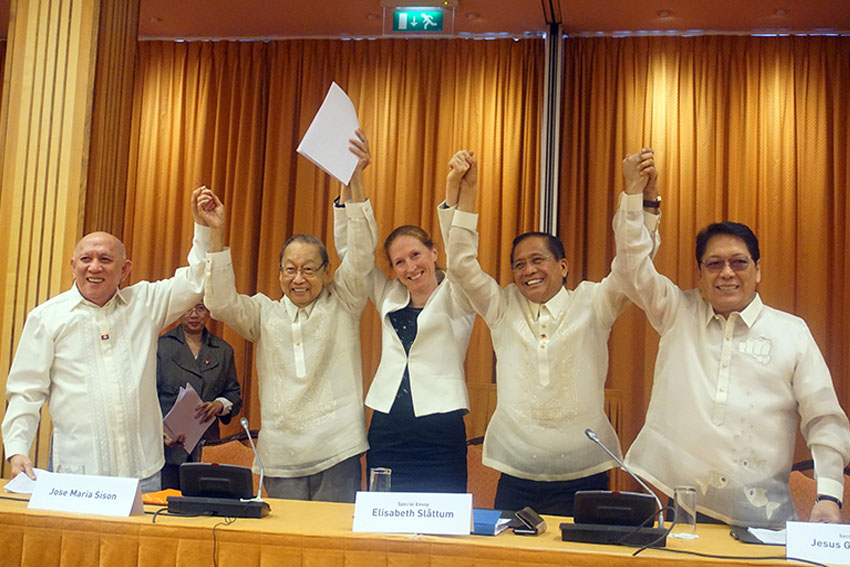 The peace negotiations under the Duterte administration was notably gaining “unprecedented advances.”

Juliet de Lima, chairperson of the NDFP Reciprocal Working Committee on Social and Economic Reforms (RWC-SER) said: “Just four days before President Duterte cancelled the talks anew, the bilateral teams of the NDFP and the government of the Republic of the Philippines initialed draft documents reflecting substantial agreements on agrarian reform and rural development, and on national industrialization and economic development.”

The initial signing, she said, came after a series of bilateral technical meetings of the NDFP and GRP reciprocal working committees on SER held on October 26 to October 27, November 9 to November 11 and on November 16 to November 17.

During the third round of talks, the Parties signed the Supplemental Guidelines for the Joint Monitoring Committee (JMC) making the work of the JMC in monitoring the compliance of the two parties with the Comprehensive Agreement on Respect for Human Rights and International Humanitarian Law (CARHRIHL) fully operational.

The Parties came up with an Agreement on an Interim Joint Ceasefire on the fourth round of talks.

The agreement was considered a “major breakthrough” in the peace process, said GRP chief negotiator Silvestre Bello III. The agreement directs the respective Ceasefire Committees to meet “in-between formal talks, to discuss, formulate, and finalize the guidelines and ground rules for the implementation of this agreement.”

The NDFP clarified that the signing of the agreement will not go against their principle of agreeing to a ceasefire before reforms are achieved.

Under Duterte’s leadership, the talks reached four rounds in less than a year.

And most significantly, the parties have agreed on accelerating the talks on social and economic reforms by creating bilateral teams to tackle on issues and work on proposals even outside the formal talks.

When the Marawi crisis broke out on May 23, the revolutionary movement expressed support to the government’s fight against terrorism.

But Duterte refused it saying he could not allow NPA fighters to “fight alongside with government” until a peace pact is forged.

Duterte was clear on insisting to the Communists to talk peace by stopping fighting.

The Communists, however, were not ready to sign a document on ceasefire until the substantial agreement on socio-economic reforms and political and constitutional reforms were put in place.

In its statement on the occasion of the 49th founding anniversary of the CPP on December 26, the NDFP said it is willing to resume the talks but will not “submit itself to talks of capitulation.” (davaotoday.com)