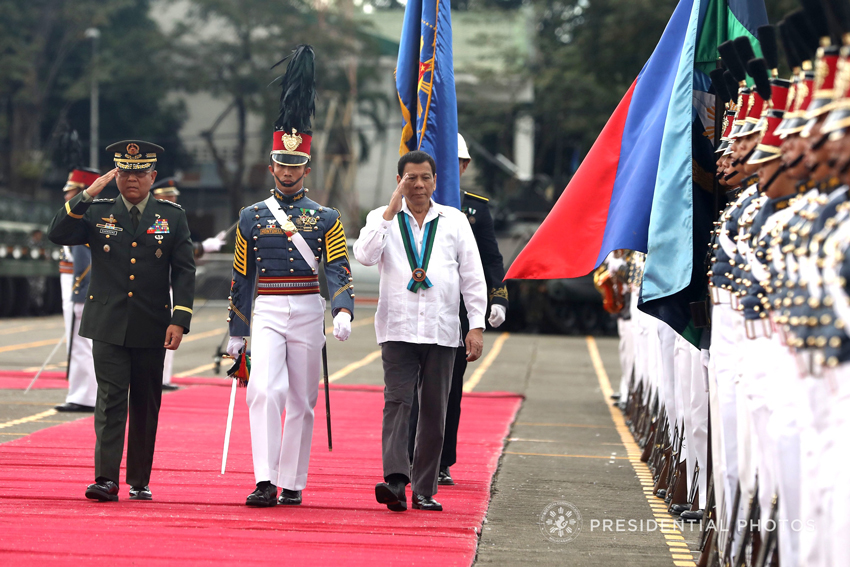 President Rodrigo Duterte during the 82nd Anniversary Celebration of the Armed Forces of the Philippines (AFP) at Camp Emilio Aguinaldo in Quezon City on December 20, 2017. (Malacañang file photo)

DAVAO CITY, Philippines – Progressive group Bayan Muna expressed alarm over the powers that President Rodrigo Duterte will possess as stipulated in the proposed amendment of the 1987 Constitution, describing the same as too excessive and very dangerous.

In a statement on Tuesday, Bayan Muna Chair Neri Colmenares said the proposed amendments will bestow upon Duterte massive martial law powers and Filipinos will be facing great risk once these powers will be used against those who will merely disagree with his administration.

He added that under the proposed Federal Constitution Duterte can call the ongoing wave of killings of mayors, priests, lawyers, the media as well as suspected drug addicts “lawless violence” and declare martial law nationwide using this ground.

He pointed out that the attempt to expand Duterte’s martial law powers is very dangerous given that the President is intolerant of dissent and has long been threatening to declare martial law or establish a revolutionary government as his solution to the country’s problems.

“The proposed Constitution devoted a whole new article on “National Security and Public Order” under Article XX. It has granted Pres. Duterte new powers to situations which he deems as emergency namely, (1) the power to intervene in case “a region fails to comply with its obligation under the Constitution as to threaten “the economy” provided under Article XX Section 15; (2) the power to take the vaguely defined “necessary measures” in case of cyber attacks under Article XX Section 10 (b); (3) the grant of a vaguely defined “necessary powers” in times of national emergency in the event Congress is unable to convene under Article VII Section 23 (b),” the progressive leader emphasized.

With such conditions under the proposed Constitution, Colmenares noted that Duterte can invent emergency situations to justify his exercise of granted powers against legitimate dissent.

He added that a total of eight martial law or emergency rule powers are now reposed on Pres. Duterte under the proposed Constitution.

Among these powers include to declare martial law, suspend the privilege of the writ of habeas corpus under Article VII Section 18, to carry out “a national policy” under Article VI Section 23 (c) (7), to take over the operations of any private business in times of emergency under Article VII, and to call out the armed forces in cases of lawless violence, rebellion or invasion,” said Colmenares.

“The fact that the Supreme Court is given the power to review the ‘factual basis’ of the cyber-attack or the national emergency and the reasonableness of the President’s actions, does not provide comfort considering the recent Supreme Court decision finding a factual basis in Pres. Duterte’s over-broad martial law proclamation in Mindanao,” he said.

Colmenares expressed fear that this reshaping of the Constitution granting Pres. Duterte these draconian powers is dangerous to legitimate dissent by activists and the opposition whom the government has already called as destabilizers.

“He is transformed to a more powerful and intimidating President who can threaten any dissent, which he considers as destabilization, with his massive powers. It is strange that while the Supreme Court has given Pres. Duterte the broadest power to declare martial law when he deems fit, the Concom Federal Constitution still gives him a total of eight martial law or emergency powers as if anticipating massive opposition to his rule” he added.

Colmenares also described Duterte’s recent call on Congress to allow him to step down from power before the new Constitution takes effect as deceptive and a hoax.

Duterte, he said, can step down anytime without the need of congressional action as he expressed the belief that Congress will not give in to such “request.”

“Such constant repetition of promises to step down or resign is not assuring coming from a man who not only swore he will not run in 2016 but also held on to power in Davao for nearly 30 years without let up,” he emphasized.

Colmenares also believes that Duterte does not want to relinquish power despite his repeated promises just as he refused to fulfill many of his campaign promises during the election.

“He will try to make sure that he or his family will control the government long after his term ends in 2022. And this is what makes the grant of additional emergency powers under the Federal Constitution very dangerous. Pres. Duterte is empowered to dictate his control of the country to continue his authoritarian rule,” Colmenares concluded. (davaotoday.com)