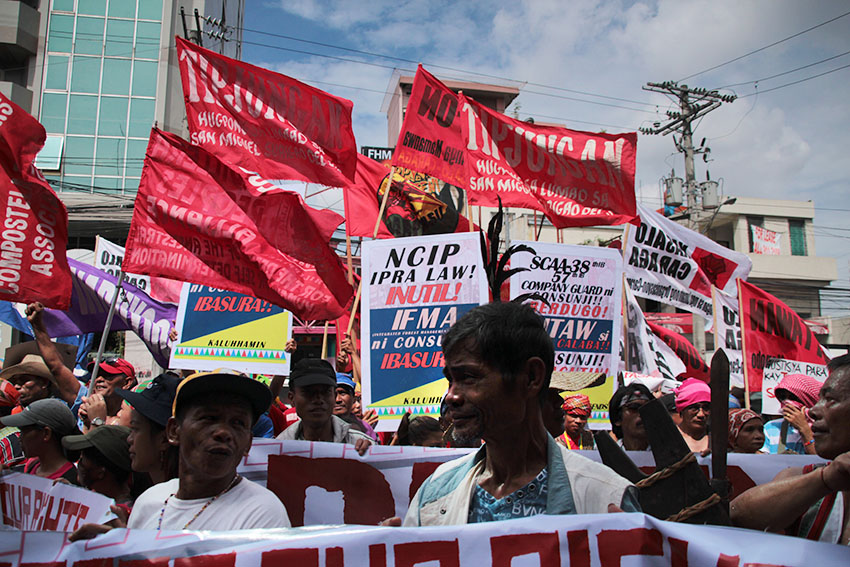 Around 1,000 Lumad and Moro activists trooped in front of the National Commission on Indigenous Peoples office in Quezon City to call for the agency’s abolition. (Paulo C. Rizal/davaotoday.com)

QUEZON CITY, Philippines — The 3,000 strong Lumad and Moro leaders alliance called Sandugo demanded for the abolition of the National Commission for Indigenous Peoples for its failure to address the issues of the national minorities.

The group also demanded, among others, to scrap the Indigenous Peoples’ Rights Act during a protest rally here on Monday in front of NCIP office, saying it is being used by the government for “development aggression.”

“This office has done nothing but cash in their salaries from the government. It is clear that this agency is the government’s way of confiscating our ancestral lands,” Sonny Serrano, an Aeta leader from Central Luzon.

Serrano cited the use of Crow Valley in Tarlac by the government for its joint military exercises with the United States forces.

“Everytime the American troops are there to conduct their military exercises, we cannot harvest our produce. For three days they will play with war, for three days, we also suffer,” he said.

The nearly 18,000-hectare Crow Valley Gunnery Range is a military reservation in Tarlac that covers the ancestral domain of the Aetas in Capas, Tarlac.

“The NCIP has done nothing to help the IPs. Our community endured a massacre because we resisted mining operations. Why do we have to be evicted from our own lands? Why do we still need a CADT so that we can develop our own? IPRA must be scrapped, and the NCIP abolished because it has done nothing for the indigenous peoples of Mindanao,” Mandagit said.

In 2015, Mandagit’s tribe fled from Bukidnon and sought shelter at United Church of Christ in the Philippines compound in Davao City because of intense militarization.

On July 30 of this year, a wedding reception in San Fernando bukidnon turned into a funeral after guests were gunned down by members of paramilitary group New Indigenous Peoples’ Army. One pregnant Lumad woman was killed and five minors were injured.

Actor Robin Padilla also showed his support to the protesting national minorities and called on President Duterte to close down the agency.

“For so long a time now, they’ve only been used for photo opportunities. Now it’s time that they be able to take back their ancestral lands,” Padilla said.

“Our beloved president, the voice of the people is the voice of God. Let us remember that this office has done nothing good for the indigenous Filipinos. The decision is up to you,” Padilla added. (davaotoday.com)