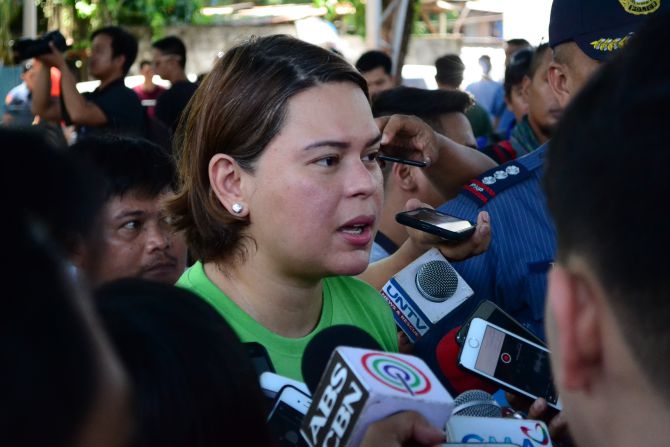 The local chief executive of Davao also said she is hopeful to have a “localized peace talks” with the communist rebels in Davao region.

“I have no choice, I am the Mayor of Davao City,” Duterte-Carpio said in a City Information Office dispatch on Tuesday.  “I’ll push things that I think can make the city better and one of them is the local peace talks.”

“I am always open, but we cannot sit down if they continue their offensive operations against the people, against the Armed Forces of the Philippines,” Duterte-Carpio pointed out.

But the National Democratic Front of the Philippines maintained that the government has long been waging an all-out war against “the revolutionary forces and people, despite the existence of the unilateral ceasefire declarations.”

This week, the government peace panel refused to participate in the 5th round of the peace talks in the Netherlands following the order by the Communist Party of the Philippines for the NPA to intensify its offensives vis-a-vis the declaration of Martial Law in Mindanao.

“In any case, it is unacceptable to the NDFP for the GRP to insist on putting its demand for any joint or bilateral prolonged and indefinite ceasefire ahead of CASER and CAPCR in order to obtain the capitulation and pacification of the revolutionary forces and the people, and lay aside the substantive agenda and the ever urgent demands of the people for social, economic and political reforms necessary for achieving a just and lasting peace,” Fidel V. Agcaoili, chairperson of the  NDFP Negotiating Panel, said in a statement.

Agcaoli added that the recent Martial Law declaration in Mindanao will “surely lead to a burgeoning in the number of political prisoners and human rights violations.” (davaotoday.com)