Talks with NDF set in July 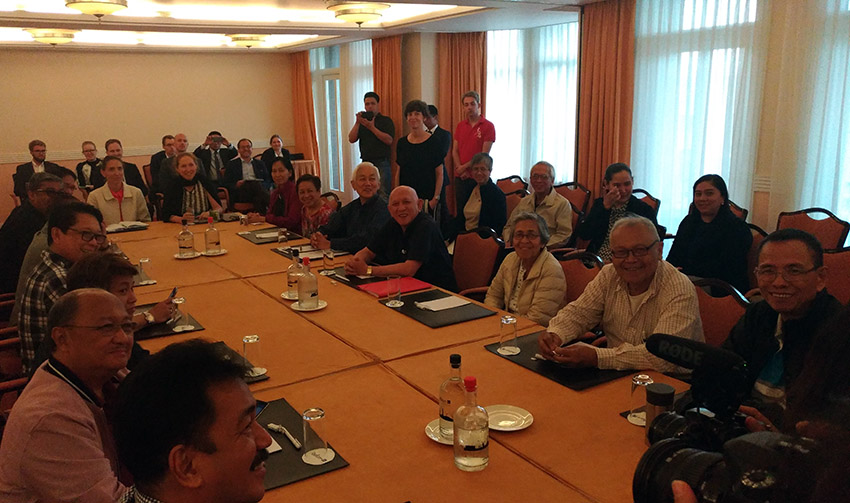 HOPEFUL. Members of the Philippine government and the National Democratic Front of the Philippines peace panels pose for a photo op together with the officials of the Royal Norwegian Government hosting the fifth round of talks at the Radisson Blu Palace Hotel in Noordwijk Aan Zee in the Netherlands on May 27, 2017 (around 12 am PHT, May 28). The much-awaited panel to panel meeting will decide on the continuation of the talks given the condition set by the government for the communists to recall the order to intensify attacks amid Martial Law in Mindanao. (davaotoday.com file photo)

MANILA, Philippines — ​President Rodrigo Duterte has announced that the formal peace talks with the National Democratic Front of the Philippines (NDFP) may resume ​in ​​July.

“I’m talking to [Communist Party of the Philippines Founding Chairman Joma] Sison. We will start the talks maybe mid July,” Duterte said in a speech before newly elected barangay captains in Lapu-Lapu City on Thursday night.

But in an online interview, Joma Sison, NDFP chief political consultant, said the peace talks may happen this June and not July.

Sison said the formal talks would resume if both negotiating panels “agree to a stand down agreement.”

“The stand down agreement creates a favorable atmosphere for the resumption of the formal peace negotiations and the interim peace agrement to be signed in Oslo hopefully on June 28,” he said.

“It is premature for the GRP [Government of the Republic of the Philippines] or anyone to suggest that the GRP-NDFP peace negotiations be in the Philipines. Foreign neutral venue as mutually agreed upon in JASIG [Joint Agreement on Safety and Immunity Guarantees] is the best. Philippine venue at this time would make the peace negotiations vulnerable to control by the GRP or to sabotage by ultra-reactionary elements,” he also said.

However, Defense Secretary Delfin Lorenzana and Maj. Gen. Rhoderick Parayno, commander of the 2nd Infantry Division, on Thursday expressed doubts that communists would respect any ceasefire ahead of the resumption of peace negotiations with the government.

Bayan Muna Rep. Carlos Isagani Zarate lambasted these statements that “spoil and sabotage the peace negotiations” between the government and the NDFP, especially now that some headways are being achieved in forging major agreements between the two parties.

“They launch attacks on the peace process in all fronts but fail to put forward a paradigm that would effectively address the root causes of the armed conflict. Their default solution to the problem is still the US-prescribed combination of psychological warfare and military counterinsurgency operations that they have been doing for decades and have been proven to be a failure and a waste of lives and resources” said the progressive solon.

The militant lawmaker has likewise called on all peace advocates to be watchful of spoilers and saboteurs as we continue to push both the GRP and NDFP to forge a comprehensive agreements on socio-economic and political reforms.

“It would be best for the DND (Department of National Defense) and the AFP (Armed Forces of the Philippines) to concentrate on the defense of the Philippines from China and the US who are now increasing their military activities in our territories instead of trying to sabotage the peace talks that can pave the way for a just and lasting peace and uplift the lives of majority of Filipinos,” he added.

Last April, the President asked Peace Secretary Jesus Dureza to work on the resumption of peace talks between the government and the communist group.

The peace negotiation was terminated last year by Duterte, followed by a declaration of the Communist Party of the Philippines (CPP) and New People’s Army (NPA) as terrorist organizations.