Two arrest orders out ​for 324 ​terrorists ​in Mindanao 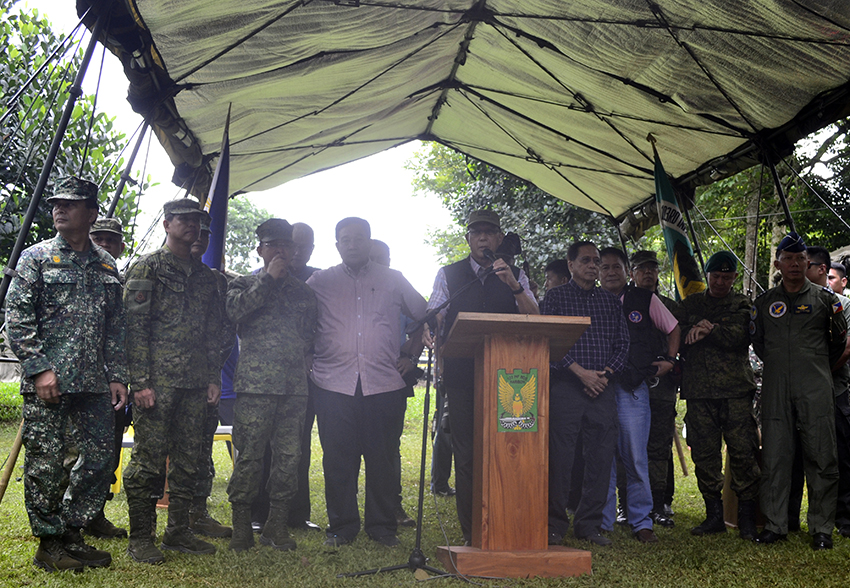 DAVAO CITY, Philippines – The Department of National Defense has issued two arrest orders at the duration of Martial Law and it covered 324 names, mostly surnamed Maute and other suspected terrorists in Mindanao.

The two arrest orders came within the more than two weeks after President Rodrigo Duterte declared Martial Law in Mindanao through the issuance of Proclamation No. 216 last May 23.

Defense Secretary Delfin Lorenzana signed the two orders “to arrest, take into custody and conduct investigation on personalities and individuals for violation of Article 134 or the crime of Rebellion as defined by the Revised Penal Code.”

Lorenzana and Armed Forces of the Philippines chief of staff General Eduardo Ano were designated administrator and implementer, respectively, as stipulated in Section 2 of General Order No. 1 entitled: “Implementing Proclamation No. 216 dated 23 May 2017” issued by President Duterte on May 30, 2017.

The first order was addressed to the AFP, the Philippine National Police and National Bureau of Investigation for implementation but the second arrest order also included the Philippine Coast Guard and the Bureau of Immigration to join in the efforts to arrest and investigate the individuals named.

The first order also cited the named individuals as members, supporters, spies and couriers of Maute Group and Abu Sayyaf Group who are responsible for bombings in Marawi and some parts of Mindanao while the second order said the subject persons named are members, supporters, spies and couriers not only of Maute Group and Abu Sayyaf, but also of the Bangsamoro Islamic Freedom Fighters and the Maguid Group.

The two arrest orders also instructed the addressed security agencies to file charges upon the arrest of the subject persons “within a non-extendible period of three calendar days from the date and time of their actual arrest.”

Section 4 of General Order No. 1 issued by Duterte states that the AFP and other law enforcement agencies shall implement the Order within the limits prescribed by the Constitution and existing law, rules and regulations.

“The state of Martial Law does not suspend the operation of the Constitution, nor supplant the functioning of the civil courts or legislative assemblies, nor authorize the conferment of jurisdiction of military courts and agencies over civilians where civil courts are able to function,” Section 4 further states.

Section 4 further states that during the suspension of the privilege of the writ of habeas corpus, persons arrested or detained must be judicially charged within the period of three days, otherwise, he shall be released.

Among the personalities named in the two arrest orders is former Marawi Mayor Fahad Salic.

Salic was arrested by authorities on Wednesday evening, June 7 in a checkpoint in Villanueva town in Misamis Oriental. His name appeared in the second arrest order issued by Lorenzana. (davaotoday.com)