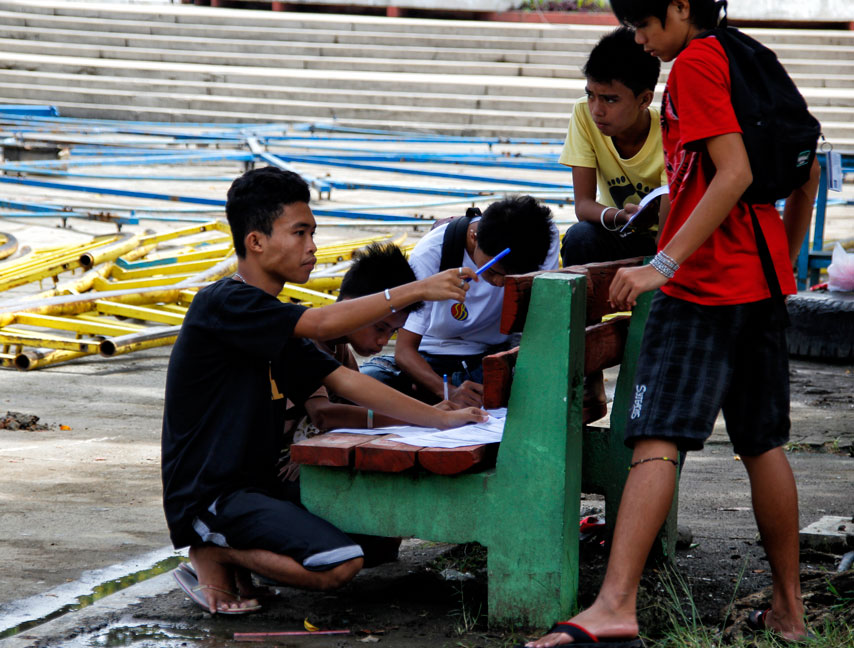 FIRST TIME
Youths gathered in a bench to fill up their voter registration forms at Davao’s Comelec office in Magsaysay Park as registration deadline draws near on July 31. Barangay and SK (Youth Federation) elections are set this October. (davaotoday.com photo by MEDEL V. HERNANI)

LEGAZPI CITY — A few days before the last day of the voter registration period for the upcoming 2016 national elections, Kabataan Partylist, along with several other youth leaders, filed a petition before the Supreme Court (SC) to question the legality of two resolutions released by the Commission on Elections (COMELEC) that set the said registration deadline.

Kabataan Partylist Rep. Terry Ridon today filed before the Supreme Court an urgent petition for certiorari and mandamus, with application for mandatory injunction, praying for the extension of voter registration up to January 8, 2016.

“Despite this provision, COMELEC has illegally set the deadline of the voter’s registration on October 31, 2015, pursuant to Resolution No. 9853 and Resolution No. 9981,” said Ridon.

“There is existing jurisprudence that proves that setting an October 31 registration deadline is illegal,” Ridon added.

“In 2009, the Supreme Court has already ruled that the COMELEC cannot prematurely terminate the continuing registration of voters before the prohibitive period of election registration defined under the law – 120 days before the regular elections,” Ridon explained.

Ridon was referring to the case Palatino v. COMELEC (G.R. No. 189868), which declared null and void the setting of the October 31, 2009 deadline for the May 10, 2010 elections, and directed COMELEC to extend the voter registration period.

Last week, the youth legislator sent an urgent request to the COMELEC en banc to extend the registration of voters and comply with the deadline set by law.

“However, we feel that COMELEC will again act on this request halfheartedly, that is why we seek relief before the high tribunal today,” Ridon said.

“COMELEC has admitted in media releases that several problems have been encountered during the period of registration of voters, namely, long queues and waiting, with some registration centers receiving up to 1,000 registrants per day; insufficient registration documents; malfunctioning or insufficient number of data capturing machines (DCM); and that DCM, which records the voters’ fingerprints, photographs and pertinent information, can only process around 250 applications a day,” the petitioners said.

“An aggravating factor in this issue is the respondent’s implementation of the “No Bio, No Boto” policy, which automatically delists registered voters who fail to have their biometrics data captured, pursuant to Republic Act No. 10367 or the “Mandatory Biometrics Voter Registration Act,” the petitioners added.

In a press conference last October 27, or four days before the October 31, 2015 deadline of filing of application for registration, COMELEC revealed that some three million voters still have no biometrics data, and will be delisted if they will not have their biometrics taken before the deadline.

“An additional aggravating circumstance in this issue is the fact that the respondent suspended the registration for voters in all COMELEC offices for a week – from October 12 to 16 – to give way to the scheduled filing of certificates of candidacy (COCs) of national and local candidates,” the petitioners said.

“This fact in itself is a violation of RA 8189, which provides for a system of continuing registration of voters that shall be conducted daily, except for the period starting one hundred twenty (120) days before a regular election,” they explained.

“With the very high volume of first-time registrants and voters in the May 9, 2016 elections, the October 31, 2015 deadline set by respondent for the filing of application of registration of voters provides is utterly insufficient to accommodate first-time youth registrants, voters without biometrics, and voters highly eager to participate in the May 9, 2016 elections,” the petitioners maintained.

“At the core of the issue is every voter’s right to suffrage. COMELEC must, at all times, ensure maximum voters’ participation in elections, and not hinder the democratic right to vote by imposing illegal deadlines,” Ridon ended. (Reposted by davaotoday.com)