Duterte and understanding leadership in Mindanao 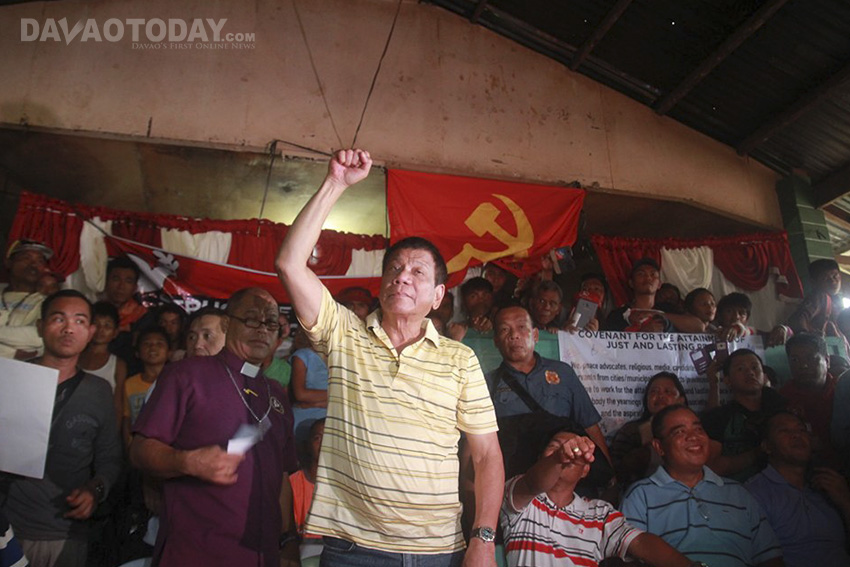 In this file photo, then PDP-Laban standard bearer Rodrigo Duterte clenches his fist as he greets the crowd during the release of the New People’s Army prisoners in San Luis, Agusan del Sur on May 3, 2016. (Ace R. Morandante/davaotoday.com)

My frequent visits to Manila yield two opposite edges of understanding the “Duterte Leadership.” There are those who hate him, and those who appreciate him. The other side expresses a downright disgust on how bizarre and unusual that a Mayor-President is now running the Philippines. It makes them feel uneasy and discomfort that a guy from the south who does not sound or act “officially” like “typical” presidents do, is now seated at the highest office of the land. This side of the fence claim that sheer disregard for human rights and the looming tyrannical hold to power hounds the one and half-year administration. They also argue that the art of gossiping fuels the massive support of the current presidency and that the spread of fake/false news of the bias-trolls unofficially peddles the good side of this administration. This so-called circular reporting fails to account the colossal human rights abuses committed by the President himself, as they allegedly claim.

On the other hand, most Mindanaoans and the Filipinos of the South, for that matter, would just respond with high hopes that the President will fulfill his promises. Most of them would gesture in tongue-in-cheek, “why blame him when this is what the Philippines deserves, anyway?” They contend that the decades-old societal insecurity brought about by rampant criminality, corruption and, in Mindanao’s case, historical injustices facilitated a “Duterte Presidency.” A “Punisher” is the only last card, or last hope for that matter to address the societal woes the Philippines as a nation is facing. We are on the brink of disaster and that we must be ready to give up our “freedoms” to a sovereign to secure our life, liberty, and property from a “natural state.” The state of nature is “nasty, brutish, and short” (refer to Hobbes, Locke, and Rousseau).

The big question remains, who ought to be a leader or a sovereign to save us from this life-threatening state of nature? President Duterte claims that to address the problems in Mindanao, we must be able to recognize that there is a historical injustice. But how? My introspection led me to deepen further understanding of how leadership was perceived in Mindanao’s history – the rule of Sultans and the Datu system, rather than the Western-imposed “democratic” system.

Historically, when Islam was introduced to the islands of Mindanao in the thirteenth and fourteenth centuries, the sultan who was considered the head of the “nation” and the government also held religious functions, together with his deputies such as rajah laut (head of the navy) and rajah muda (head of the army). In other words, their leaders were Muslims and must be religious at the same time. In citing William Dampier’s voyages, “Of the Inhabitants, and Civil State of the Isle of Mindanao,” Masefield in 1906 wrote that the sultan was highly regarded as a “holistic” leader who performed both secular and spiritual functions. However, in the twentieth century at the decline of the sultanates in Mindanao, the role of who is a Muslim leader has largely diminished and reduced to purely religious functions in their community and thus reiterated the need for these “religious leaders” to be educated abroad to qualify as mufti or imam.

The supposition above dangerously juxtaposes with the claim of the ISIS to establish an Islamic State (caliphate) in Mindanao, if not the whole of the Philippines; not to mention, we still have contentious issues with BIFF, MNF-MILF rivalry, the concerns of indigenous peoples, and the Mindanao settlers. Conversely, the communist insurgency redefines leadership in the context of the emancipation of the working class under a proletarian direction who wanted to repossess the Philippines through a socialist revolution against the “US-Duterte regime” (there goes the anti-government slogan again). Indeed, in approaching Mindanao as an issue and how leadership matters in its development, we have to understand its complexities.

Chris Lowney, in his 2003 book entitled “Heroic Leadership”, described different ways to think about some leadership qualities from a Christian point of view: a Jesuit religious leader. By citing the case of Goes, Ricci, and Clavius, he argued that “leaders are always teaching and learning” as they “devote themselves to excellence” and “influence others by their example” and that they should “energize themselves by the sheer ambition of their heroic goals.” In the modern times, leaders should be able to equip themselves with necessary skills and encourage their “tribe” (subjects) to do more for a noble cause through building value-based relationships. This translates to encouraging the subjects to be better stewards of the present and future generations to come.

However, if we want to use the parameters above as the rubric for understanding the Duterte leadership, we can only think out of the box. I say we are putting a huge burden on one man to solve all these humongous problems accumulated all throughout the administrations and presidents of this republic. The President is not a sultan, a demi-god, and not superman. Leadership and governance do not rest on a single person alone. We must bear in mind that the “State” is not a monolithic creature, if not an inoculated Leviathan, or worse a Frankenstein. In fact, the bureaucracy serves as the backbone of any form of government. The polity comprises of the state and the bureaucracy at the top-level, and at the bottom, the civic associations, non-state actors, down to the neighborhood and the people at the ground level.

Nevertheless, in the light of this administration’s shift to securitize dissent through speech act and preemptively profile would-be enemies of the state, the bigger challenge for President Duterte is to humbly step back and remind himself where he was coming from in fulfilling his oath of service to the Filipino people for them to reach their full human capacities. The voice of the people must be heard, not necessarily in a voce magna (utterly loud voice), but perhaps subliminally. Mindanao is definitely not a general’s battleground for trophies and glory. There are full potentials and genuine possibilities towards peace and development in Mindanao as the “Land of Promise”; and promises are not meant to be broken. (davaotoday.com)