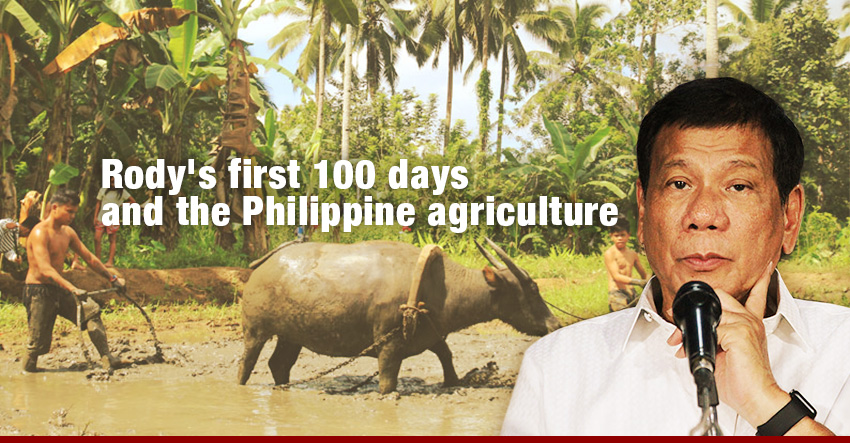 Rodrigo Duterte’s overwhelming victory during the last Presidential election expressed the collective hunger of the 16-million strong Filipinos towards substantial change. Despite the vast support of the Filipino people to the Duterte administration, the first 100 days of Duterte’s presidency was not a smooth ride, instead it was full of challenges, trials and trivial issues brought by various players in the Philippine political landscape, from convicted criminals and drug-lords, ruling elites to ultra-rightist peace saboteurs and imperialist lackeys.

The increasing number of death toll associated with the government’s campaign against illegal drugs is a social problem that should be given enough attention and proactive actions. However sensationalizing the issue, derailing substantial points and discourses towards change will only serve the interest of those who would like to maintain the status-quo by maligning the gains of the current administration and progressive forces in the Duterte administration. The bitter-yellow trolls of the past landlord Aquino regime and his liberal minions alongside some ‘lamestream’ media are hell-bent in discrediting the accomplishments of the people’s movement towards change.

In the spirit of discourse, let us try to read Duterte’s first 100 days in office in the context of Philippine agriculture. This is also an opportune time to give enough attention to our farmers as we observe peasant and indigenous people month this October.

Duterte’s appointment of land reform activist and former Anakpawis representative Rafael Mariano as agrarian reform secretary is a positive move as it raises hope to the landless farmers of this nation. Unlike the previous DAR administrations, Mariano’s leadership opened its door, literally opening the gates of DAR’s national office that has been closed for 18-years as the past DAR administrations play deaf and dumb on farmers’ protests. Listening to the plight of our farmers at the grassroots level by conducting consultations and providing swift and pro-farmer decision is fundamental for a government official.

Among the historic decision that Mariano ruled upon is the distribution of the 358.22 hectares of land in Hacienda Luisita in Tarlac. Mariano declared that the struggle towards change should start from the belly of the beast. While, various haciendas throughout the country set to be reviewed and to be distributed to the farmer-tenants. Also, Mariano’s commitment to end the exploitative Aryendo System is a positive move. The moratorium on the conversions of land is promising too, not just for farmers but to the entire nation in general especially when we talk about agricultural production and food security. During the Presidential Agrarian Reform Advisory Council meeting last month, President Duterte supported the proposals and decisions of Mariano, which is a good start in their partnership towards change.

The future of agriculture

Duterte promised to provide sufficient food for every Filipino by supporting a self-reliant agricultural economy. The new DA administration under Secretary Manny Pinol also declared its adherence to the thrust of the Duterte administration towards self-sufficiency. Earlier this week, DA allocated P21 billion support subsidy to rice farmers.

For more than a decade, the peace-talks between the government and the National Democratic Front of the Philippines slumbered, as peace-consultants were imprisoned and criminalized by the past regimes along with hundreds of political prisoners mostly farmers and farmer-organizers in the countryside.

In a recent survey of IBON Foundation, 1,170 respondents were asked if they were familiar of the ongoing peace talks. Of this figure, 77.7 percent or 8 out of 10 Filipinos said YES. While 85 percent Filipinos on its latest survey conducted between September 1-15, 2016 expressed support on the agenda on socio-economic reforms.

The undertaking of the Duterte administration for the peace talks is remarkable especially the release of the NDF’s 22 peace consultants and the prospects of general amnesty and releasing all political prisoners as the President himself declared. This week the second formal round of the peace talks in Oslo, Norway is facilitated by the Royal Norwegian Government. It is set to tackle the second agenda which is the Comprehensive Agreement on Socio Economic Reforms (CASER).

Discussion on the social and economic reforms (SER) is very important to our farmers as it will try to dissect and understand the roots of the armed conflict in the country–landlessness and lack of national industries.  In practical sense, the resumption of the peace talks and the unilateral ceasefire declarations of both sides will hopefully create a relatively peaceful environment in the rural areas. This substantive agenda should lay the foundations in finding solutions towards peace that is based on justice.

Despite of these positive developments within the last 100 days of the Duterte administration, there are things that the current administration must address. Among these are the continuing rights abuses against farmers including the land struggle of farmers in the fishing and farming community in Barangay Patungan in Maragondon, Cavite against Henry Sy’s land conversion and development aggression;  the land struggle of the farmers in Yulo King Ranch in Taytay, Palawan which claimed the life of a peasant leader Ka Arnel; and the threat of demolition of the farmers community in Hacienda Yulo in Canlubang, Calamba City in Laguna.

Development aggression of mining companies like in the case of Agusan Petroleum (AgPet) in Compostela, Valley and Davao Oriental continues.  Despite the expiration of its exploration permit, AgPet continues to explore and intimidate local resistance through the investment defense force that is backed by the Armed Forces of the Philippines.

We raise our hopes and welcome the positive developments of the Duterte administration, but it is important not to lose sight and focus on substantive points, let us not allow the derailments of international and local reactionaries. Let us support the pro-farmer and pro-people programs of the Duterte administration, let us support the peace talks and let us be vigilant.