When the river flows, justice calls 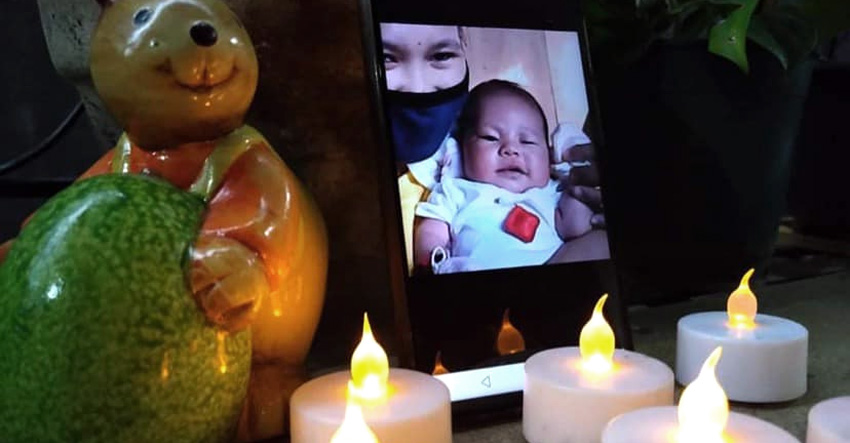 A name that will forever be etched in my heart, in my memory, and in our collective history.

Baby River (“Mikmik”) was born on July 1, 2020 at Dr. Jose Fabella Memorial Hospital to human rights defender Reina Mae “Ina” Nasino. Her birthweight was low at 5.5 pounds. Thus, exclusive breastfeeding was strongly recommended for her upon demand or at least every two hours. River was born while her mother, Reina Mae, is wrongfully detained at Manila City Jail for illegal possession of firearms and explosives.

Reina Mae, along with two others, was arrested on November 5, 2019 at the Bagong Alyansang Makabayan (Bayan) office in Tondo, Manila. Police officers wearing face masks barged into their rooms, forced Reina Mae and Alma Moran to the ground, and proceeded to “search” the premises. Reina Mae could hear her friend, Ram Bautista, from the other room, telling the unwanted visitors that he belongs to Bayan, a legal progressive mass organization.

Reina Mae and Alma were made to lie face down for almost an hour. They were scolded when they tried to turn their heads and see what the police officers were doing. Afterwards, the police announced that they found firearms and explosives in their office. This puzzled them for none of them owned nor possessed any firearms or explosives. They knew that those allegedly found in their room were planted by the intruders.

Reina Mae, Alma, and Ram were arrested following the implementation of a string of search warrants issued by Quezon City Executive Judge Cecilyn Burgos-Villavert in October 2019, after General Debold Sinas paid her a visit. These defective search warrants were carried out in Negros and Manila, leading to the illegal arrest and detention of known human rights defenders and activists. Now, they are hailed to the courts to answer to these fake criminal charges.

At the time of her arrest, Reina Mae barely knew that she already had River in her womb. She only came to know about her pregnancy in the medical examination that was a matter of procedure for persons arrested. All throughout her pregnancy, Reina Mae was seen by a doctor only once. The COVID-19 lockdown even made matters worse.

Reina Mae’s case is no different from that of the other political prisoners languishing in jail. Judicial harassment has always been used by the authorities to sow fear and terror to anyone critical of the anti-people policies of the State.

But what makes Reina Mae and River’s story any different, heartbreaking, and enraging? Theirs is a story of forced and hurried separation of a vulnerable infant from her mother whose breastmilk would have kept her alive. Theirs shows how cruel and unjust the powerful are against women human rights defenders who refuse to be silent. If only Reina Mae was not arrested on fabricated, ludicrous, non-bailable criminal charges, she would not have given birth to her baby under dismal conditions. They would not have been separated from each other because of questionable jail policies that run counter to basic human rights.

As Reina Mae’s counsels, we pleaded the court to allow Reina Mae to breastfeed, nurture, and care for her baby. We cited domestic and international laws to support Reina and River’s appeals. But our pleas fell on deaf ears.

On August 13, more than a month after the birth, I received a call from Reina Mae. She was frantic. Jail authorities, she said, informed her that baby River had to go and that arrangements had to be made to fetch River within the day. The authorities claimed that they had already received the court order denying our motion to keep Reina Mae and her baby together. The denial of our motion harped on the policy of the jail to allow nursing detainees to keep their babies with them for only a maximum of 30 days, which we think is not just illegal but also inhumane. We were left with no other choice but to give River to her grandmother.

Reina Mae’s worst fears came true. Baby River died due to Acute Respiratory Distress Syndrome hours after we filed our Very Urgent Motion for Furlough to allow Reina Mae to see her dying daughter on October 9. Reina Mae was subsequently granted by the court three days furlough to lay her baby to rest. However, the Bureau of Jail Management and Penology moved for the reduction of the period for her furlough citing lack of personnel to secure this “high-risk” inmate. From 72 hours down to six hours became Reina Mae’s period to mourn with her family – all because she has been arbitrarily tagged by the jail authorities and the men in uniform as a high-risk security detainee, based on the gravity of the charges filed against her.

Jail authorities and police officers forbade Reina Mae to grieve privately and bid her daughter farewell with dignity. Scores of men in uniform and armed with high-powered rifles swarmed around her, intimidating and blocking people from consoling her. Even we, her lawyers, were prevented from conferring with her despite us invoking lawyer-client privileged communications. Reina Mae remained in handcuffs, unable to eat, drink, or even wipe her own tears properly. She remained in shackles, powerless to embrace her daughter’s casket up to the last minute before laying her to rest in her little tomb.

Reina Mae’s family were not spared from cruelty when the police deliberately took over the funeral march they have prepared for baby River. The police suppressed Reina Mae and her family’s right to express their indignation over the injustice that befell mother and daughter, which were well within the bounds of their Constitutionally guaranteed freedom of expression.

As a human rights lawyer and law professor, as a woman, and as a human being, I was shattered to the core to witness this inhumanity, cruelty, and discrimination against our client Reina Mae, her baby River, and their family.

What I have been teaching my students is that every person has the right to live with dignity and to be treated humanely, without distinction and discrimination. Hence, even detainees maintain their basic human rights despite incarceration. This holds true all the more for political prisoners like Reina Mae, who have been locked up due to false charges filed in retaliation for their unwavering resolve to defend human rights, fight for justice, and demand accountability.

Reina Mae and baby River’s story shows us otherwise. For people with no big names and for activists, human rights are never served on a silver platter. These should always be asserted against the establishment and must be defended for recognition, respect, and protection.

Three weeks have passed since baby River, our little Mikmik, joined our Creator. Her brief life, marred with injustice from her first heartbeat in her mother’s womb, has come to an end. But it began a period of questioning: How did we come to this? River left an indelible mark, a hollow in our hearts that will continue to remind us to fight for truth, justice, and accountability for the violations and oppression committed against the poor and the marginalized. (davaotoday.com)